After a long 8-hour flight, my first taste of airplane food, and a lot of sleep deprivation, I finally made it to London! My boyfriend Scott, his mom and sister and I got to London January 7th. We landed in London Wednesday afternoon and took a nice long nap to try and cure our jetlag. Our hotel was a cute little apartment-style flat in Notting Hill right next to the tube (what they call the subway), which made it super convenient for us to go everywhere.

After our nap, we went to some pubs and ate dinner and drank some of the local beer. It was my first legal drink! Then we walked around a bit and saw the sights of London at night, such as The Eye, Big Ben and The Shard. We went on a ghost tour that night on a double-decker bus and they showed us all of the sights, accompanied with the random spooky facts about the city. I got to see the Tower of London, the museum district, The House of Parliament and much more! They ended the tour with a ghost coming onto the bus and I was so tired I actually got a little scared. It was a fun way to see London though, rather than just the regular old tour guides.

On Thursday we woke up and got on the tube to go to Hampton Court, which was the palace for the British Royal Family up until the 18th century. Everything was so decorative and elaborate; I loved learning about all of the history of King Henry VIII and his wives. One of my favorite rooms was the Great Hall, where tapestries hung from the floor all the way up to the stunning vaulted ceiling, which was covered in elaborate woodwork. I could just imagine attending the grand parties and balls that the king hosted here!

I also loved walking through the living quarters. The first room was filled with military armor and weapons decorating the walls. From there was a long hallway with room after room for the king: his drawing room, his meeting rooms, several bedrooms, dressing rooms, bathrooms… and all overlooked the beautiful gardens in the backyard, which, by the way, had the world’s biggest grapevine!

My absolute favorite part was The Chapel Royal, which was at the heart of the palace. The ceiling was a striking blue color with elaborate carvings and detail in blue. The windows were beautiful stained glass, divided by statues of cherubs playing heavenly instruments. We walked in through the choir loft, where there were replicas of the crown jewels. I would love to go to a service here one day.

After Hampton Court Palace, we went back to go to dinner at a café in a crypt underneath St. Martin’s Church at the heart of Trafalgar Square. The atmosphere was really neat and the food was delicious- which is hard to come by in London. My favorite was dessert of course: warm apple crumble with a rich custard sauce to pour on top

From dinner we went to go see Monty Python’s Spamalot, which was absolutely hilarious, and by far my favorite musical I have seen.

Friday we took a trip to Windsor Castle, which is currently one of the official residences of The Queen. We got to tour the kitchen, where the royal chef prepares all of The Queen’s meals. We also got to see the State Apartments, Queen Mary’s famous dollhouses and St. George’s Chapel. My favorite part of Windsor was watching the guards standing all around. They stood so still; I have no idea how they do it. Sarah and I took a picture, but we were scared to get too close because he had an intimidating bayonet on the end of his gun. Right after the picture was taken, he stomped really hard and I got scared and ran. Everyone started laughing, including him! I’m pretty proud to say that I made a Queen’s guard laugh. 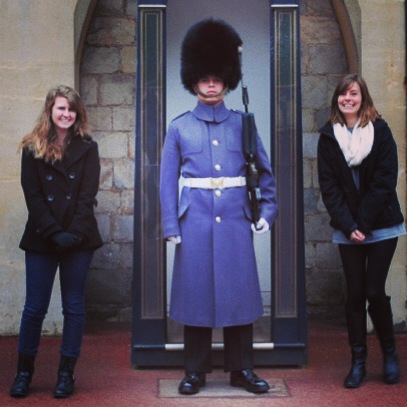 Me and Sarah posing with a guard at Windsor Castle 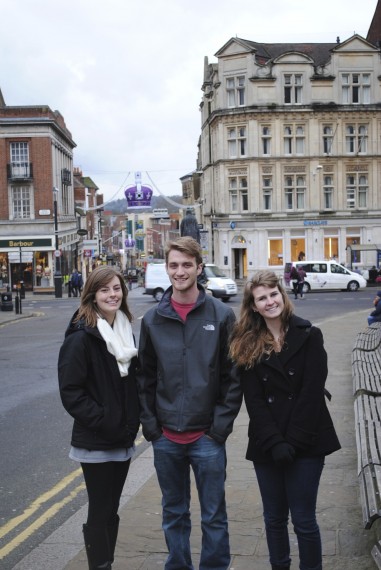 Me, Scott and Sarah on the streets of Windsor 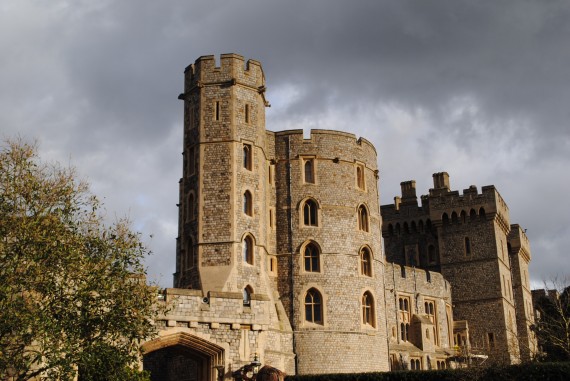 Saturday we spent walking around and shopping. We started at an outdoor market on Portobello Road right by our hotel. We got cappuccinos and crepes as we walked, then made our way to Harrod’s, which is a 7-story 4.5-acre department store. We went to the toy kingdom, technology department, and finished at the Pizzeria where we indulged in some of the best pizza, and we haven’t even made it to Italy yet!

After Harrod’s we visited the museums in Trafalgar Square. On our way back home we walked down what is known as “Billionaire’s Row” which is the neighborhood of national ambassadors and embassies. At the end of the street is Kensington Palace, where William and Kate live.

Sunday we flew to Venice! Flying over the alps was so beautiful. We took a water taxi to the hotel and got to see around the city. I have never seen anything like Venice. We spent the relaxing evening walking around Piazza San Marco and had pasta and wine for dinner.  Monday we ate breakfast, shopped (I got an Italian leather backpack!) and enjoyed gelato.   Me and Scott parted ways with his family at the airport and are now off to Paderno del Grappa for school! 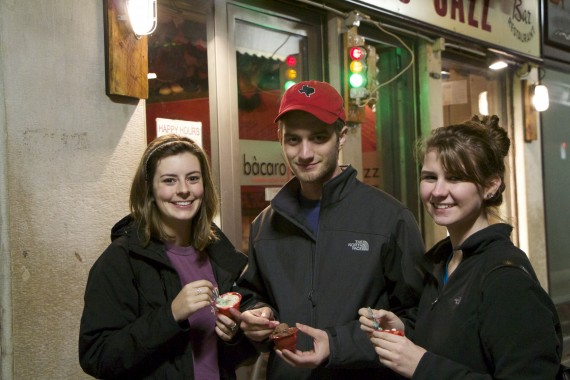 Enjoying gelato in Italy for the first time! 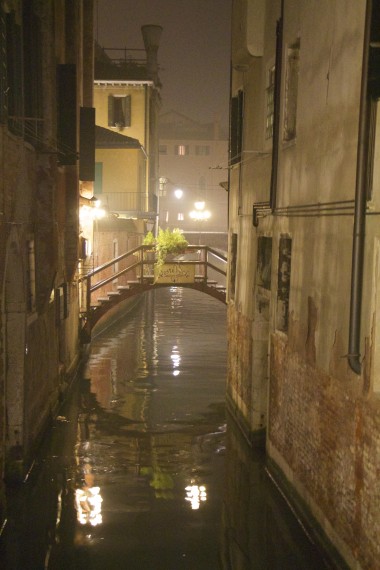 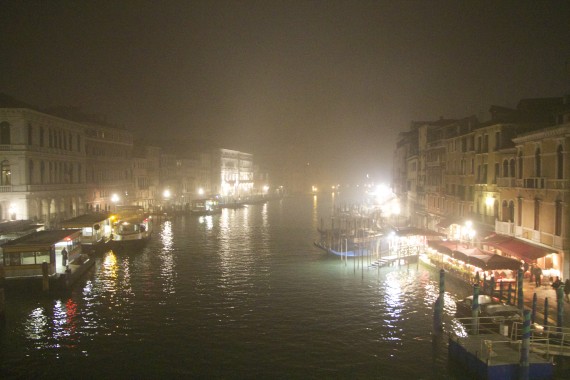 Foggy night on the Grand Canal