For my second travel week, I visited Barcelona. Barcelona has been ranked the 14th most ‘livable city’ in the world and is the 4th most visited city in Europe behind Paris, Rome, and London. If you are interested in visiting a city that offers historic sights as well a unique nightlife, Barcelona is the place for you. Visiting Barcelona may shock you, as the culture is very different than that of Italy. I thought Italy was laid back and relaxed… but Barcelona may have been the most relaxed city I have visited thus far. After spending 5 days there, I can give you some tips that will help you survive the culture switch from Italy to Spain.

Barcelona is one of the safest European cities –

One thing I noticed that adds to Barcelona’s “livable city” reputation was the friendly, relaxed,and helpful people. When I first arrived at the Barcelona airport, I was by myself and I was going to meet my friends at their apartment. I had no idea where it was…. but thankfully, I had an address and the help of a young man outside the airport. I showed him the address and he brought me to a taxi, directing the taxi driver to where I was headed…… before I knew it I was dropped off right outside the apartment. From my past experiences in other cities, taxi drivers usually drop you off within walking distance from your hostel and have you find the exact location on your own. In this situation, it was late at night and the taxi driver was helpful enough to bring me to the front door of our apartment without myself having the risk of getting lost. From this point on the people of Barcelona were very accommodating for our group.

When you are walking around the touristy areas of the city, as well as the beach, you may encounter street vendors who are persistent in trying to sell their items. My advice is to not reply or avoid eye contact, as this will help indicate you are not interested. Most of the time when I did this, they would walk past me rather than insist I buy something. It may feel rude, but in these circumstances, you want to avoid being overwhelmed or scammed by vendors.

Respect for the language –

Changing from Italian to Spanish may be a little bit confusing since you are used to hearing and trying to speak Italian. From what I experienced, I would try your best to speak a little Spanish during your stay. Many Barcelonans have an excellent command of English and most of the time they will understand what you are saying, but they will not use English when they are talking to you. Barcelonans treated us as visitors, so out of respect we tried to speak a little Spanish when in Spain. I knew basic Spanish, so I was able to get by in circumstances such as speaking with clerks at markets, as well as ordering food at cafe’s and starting a conversation. I was constantly visiting the local market near our apartment to purchase drinks and snacks, and each time I would walk in the market the clerk would say to me, “your back again!” with a smile on his face. This made going into that specific market a lot easier because we were able to have a conversation and share some laughs in the mean-time. Looking back on the language barrier, I felt that the Barcelonans enjoyed our presence as long as we were  friendly and respected their language by giving an effort to speak Spanish.

A sunny day in Barcelona–

When I first arrived in Barcelona, it was rainy and the city was dead….. I did not know what to expect when the sun came out. The part of Barcelona I enjoyed the most was how bright the beach was in the early morning. Not meaning how sunny it was, but more how many people were walking the beach in the morning and how up-beat everyone was. I would wake up most mornings around 9 and I would grab a pastry from the nearest cafe and walk to the beach with my headphones. I sat on the benches along the beach and I would listen to my music and look out into the Mediterranean Sea while people watching. I have never seen a city so lively at this time of the day…..people were rollerblading, playing volleyball, reading, kicking the soccer ball around, and jogging. Waking up each morning and walking to the beach may have been the best start to any of the days I have spent here abroad. It really allowed me to put all of my thoughts aside and gave me the chance to simply think about how special this opportunity really is. If I were you visiting Barcelona, I would definitely wake up each morning and take a walk to the beach…. in Barcelona it is hard to not have an enjoyable stay. 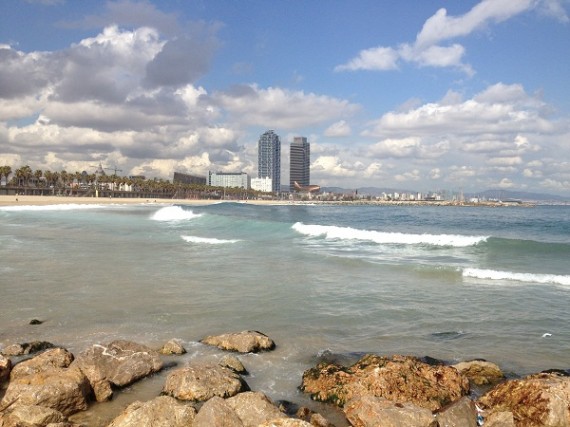 My morning on the beach 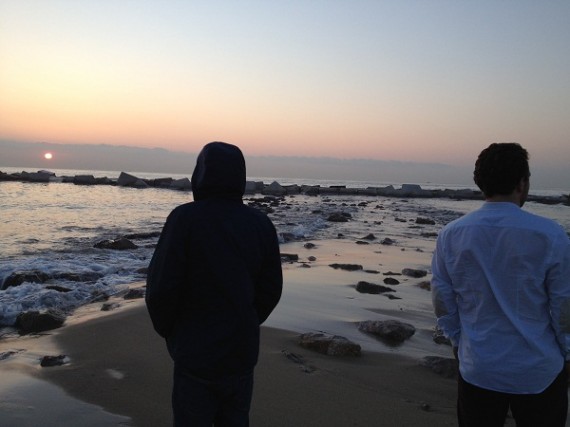