The first one was last Friday we had a guest speaker in my Entrepreneurial Strategy class. This speaker was Guido Chiavelli, the CEO of an Italian designer children’s clothing brand called il Gufo. Il Gufo, which is Italian for “the owl”, was started by his mother in 1980 when she began sewing baby bibs. What started as a small business out of their home has now grown into a multi-billion dollar children’s clothing brand that considers it’s biggest competitors major labels like Ralph Lauren and Dolce and Gabbana. Mr. Chiavelli told us first hand how il Gufo has grown into such a successful organization. He talked to us about how they have differentiated themselves from their well-known competitors, how they successfully found and capitalized on a niche market, and how they handled a growing supply chain while maintaining high-quality products that seem one-of-a-kind. He also talked about how il Gufo has handled their rapid growth and how to make decisions about international expansion. While these are all concepts that you learn about in a typical entrepreneurship class, it was a completely different experience getting to hear it directly from the CEO that went through it all and having to opportunity to ask any questions that we wanted. One of the best parts is that Mr. Chiavelli extended an invitation to the whole class to tour il Gufo’s headquarters in Asolo which a small town about 20 minutes away where the CIMBA MBA campus is located. We are working with our professor now to set up a trip! 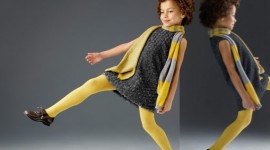 One of my favorite outfits from il Gufo's Fall/Winter line!

The beginning of this week brought another unique opportunity to learn from a company first hand, but this time it was for the whole campus! Instead of our normal morning classes they split all of the students up into six groups and we each got to go on tours of companies in the area. The companies ranged from sporting goods manufacturers, to television studios! The company that I got to tour is called Nardini. Nardini has been producing Grappa and other liquors in a near by town called Bassano since 1779. So what is Grappa? Grappa is made by distilling the skins, pulp, seeds, and stems of grapes (called the pomace) to create a very strong tasting, high alcohol content liquor. This region of Italy is known for the production of Grappa and Nardini is one of leading producers. While this company has a rich history, their headquarters looks like something from the future! To celebrate their 225th anniversary, the Nardini family unveiled an amazing new addition called the Bolle.

The two curved glass bubbles that make up the Bolle are nothing short of an architectural wonder! Although they faced many set backs during the design and construction of the Bolle, the results are incredible. One bubble is home to the main conference room for Nardini and the other is the test laboratory where all the samples of Grappa are processed. 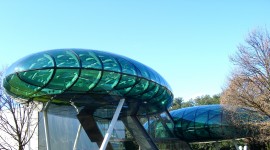 The Bolle from the outside 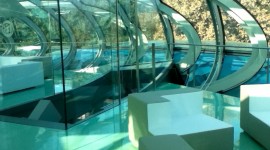 The inside of the Bolle

The test lab inside the Bolle

The inside of the headquarters is just as futuristic as the large glass structure outside. The auditorium, for example, is completely automated by a touch-screen remote in the back of the room. Now when I say completely automated, I mean it! From this remote you can control everything from the projection screen and curtains to unfolding the rows of seats and removing the whole back wall of the room! The glass panels of the wall literally turn 90 degrees and move off to the sides completely opening the auditorium to the outside, all with the press of a button! The whole facility was designed to mirror Nardini’s ability to blend tradition and innovation, and the results were incredible!

The back wall of the auditorium closed 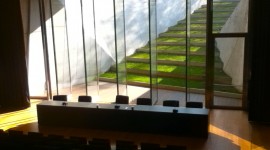 With the press of a button, the panels opened and separated to either side!

After the tour they took us to sample some of the products and although Grappa is definitely an acquired taste, the rich history of this drink made the whole thing worth it!

Getting to experience successful international companies first hand was such an incredible experience. As someone who aspires to work internationally, it was great to have to opportunity to be able to learn from real-life entrepreneurs and CEOs and to be able to ask them for advice. Although these were such different experiences, from a designer children’s clothing company to one of the leading producers of Grappa, both were interesting and helpful in different ways. The best part is that this is just a little taste of some of the things that I get to do while here in Italy to learn about international business first hand. I can’t wait to see what the next opportunity is that CIMBA gives us!