Czech This Out: Prague Week 10

As my study abroad experience comes close to the end, I have began to feel not only sad that I’ll be bored in Chicago soon, but I will miss seeing different parts of the world every weekend. Skyscrapers in Chi-city do not compare to some of the buildings and monuments I have laid my eyes on these past few months. One of my favorite places that I visited was Prague. Prague is so beautiful and even though it was a lot colder than Paderno, I was so happy to be there. It is the capital and largest city of the Czech Republic and is the fourteenth-largest city in the European Union. It is also home to a number of famous cultural attractions, many of which survived the violence and destruction of 20th century Europe.I knew I had barley 2 days to travel around, so I had to make the most of it. Arriving at our hostel around 4pm, Prague Square Hostel, we paid for our stay with yet another confusing currency, and then headed out for the evening. We all walked around the Old Town Square, which was just a few short meters from our hostel. Featuring various architectural styles including the gothic Týn Church and St. Nicholas Church. Among many churches, tourists may find the Astronomical Clock on this square, while the tower at the Old Town Hall offers a panoramic view of Old Town shops. 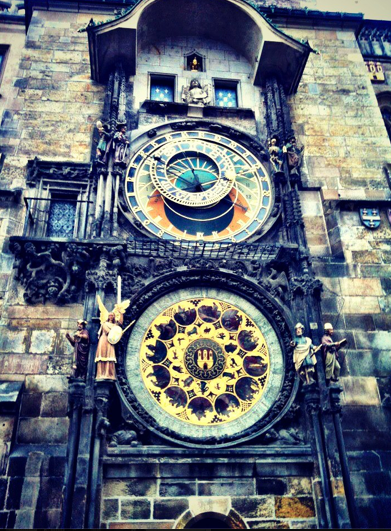 After shopping at the little markets, we all headed to an Irish pub to seek what the culture was like inside. Later on, we went to a Mexican restaurant that was recommended to us on TripAdvisor, an app that everyone has seemed to rely on while traveling. Later on that night, we went to an 80’s & 90’s themed club called Lucerna and it was a great time to reminisce on the oldies that we all grew up with. Backstreet Boys and Vanilla Ice were played just to name a few….

The next morning we all got up early and headed to breakfast, what everyone looks forward to. I’ve come to the realization, especially in big groups, we are more excited to find good places to eat  than a room full of 400lb Sumo wrestlers. That being said, the breakfast was awesome because it was very Americanized with a little culture feel. Prague has bagels….so we obviously had to take advantage. The place was called The Globe, and if you are looking for a egg cheese and bacon on a bagel or a great vegetarian omlette, then this is the place for you. 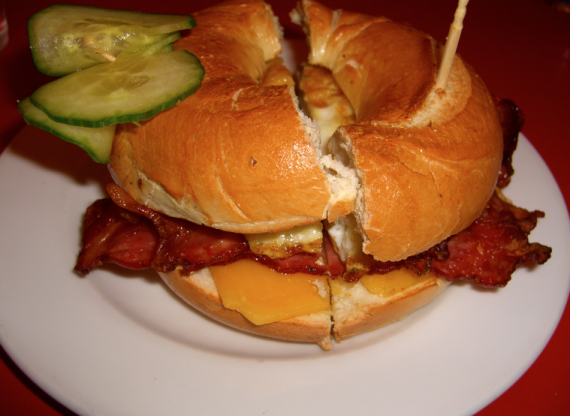 Our walking tour was at 1pm (or should I say 13:00) so we  decided to walk around the markets and the square again to kill time. We all enjoyed some hot chocolate that was homemade right on the streets at a stand. Then, we walked around the clock and stared at its incredible beauty. EVERY HOUR, the square gets packed with people just to hear the bell ring reminding the town, another hour has successfully gone by. It was really cool to be apart of the crowd and watch the big clock hands move around the clock while everyone cheered. The people of Prague are very delightful and positive, and one person told me the reason they do this is because the gift of life is so important, and reminds us, “We should live every HOUR of the day to the fullest.” (I guess this guy doesn’t sleep?) 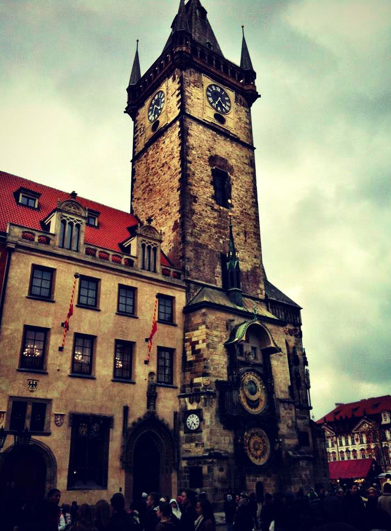 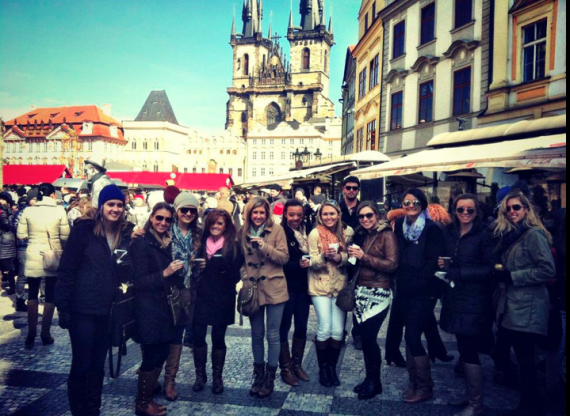 Our first stop was the Charles Bridge which is a famous historic bridge that crosses the Vltava river in Prague, Czech Republic. Its construction started in 1357 under the auspices of King Charles IV, and finished in the beginning of the 15th century. As the only means of crossing the river Vltava until 1841, the Charles Bridge was the most important connection between Prague Castle and the city’s Old Town and adjacent areas. This “solid-land” connection made Prague important as a trade route between Eastern and Western Europe. The bridge was originally called the Stone Bridge but has been the “Charles Bridge” since 1870. 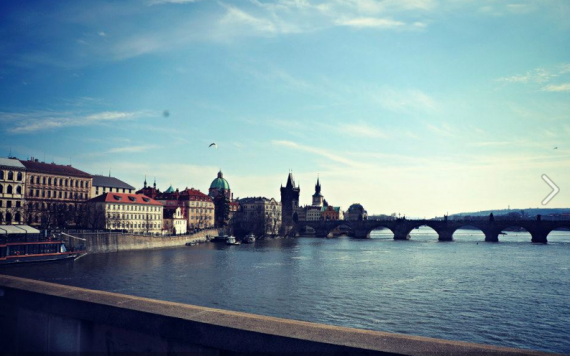 As we walked through the town of narrow streets and steep hills, we climbed up the road to the John Lennon Wall. Once a normal wall, since the 1980s it has been filled with John Lennon inspired graffiti and pieces of lyrics from Beatles songs. n 1988, the wall was a source of irritation for the communist regime of Gustáv Husák. Young Czechs would write grievances on the wall and in a report of the time this led to a clash between hundreds of students and security police. The movement these students followed was described ironically as “Lennonism” and Czech authorities described these people variously as alcoholics, mentally deranged, sociopathic, and agents of Western capitalism. Aside from all the history, I would simply say it looked like a hipster’s playground. It was very artsy and the phrases painted were interesting and cool to read. 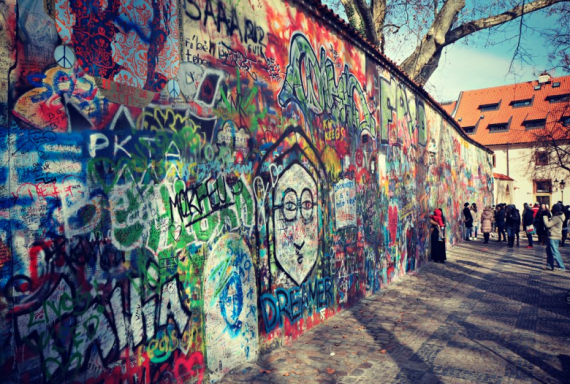 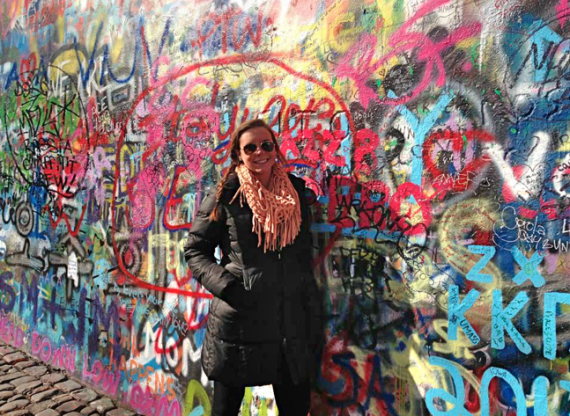 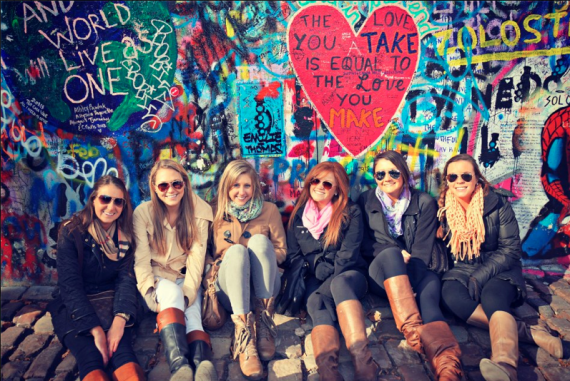 Today, the wall represents a symbol of youth ideals such as love and peace.

On to the next event, we walked up towards the famous Prague Castle which is a castle where the Kings of Bohemia, Holy Roman Emperors and presidents of Czechoslovakia and the Czech Republic have had their offices. The Bohemian Crown Jewels are kept within a hidden room inside it. 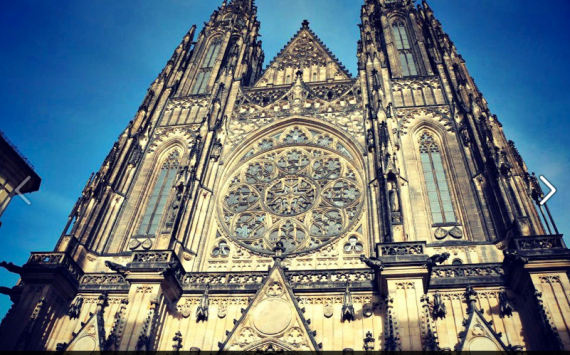 According to Guinness Book of Records, Prague Castle is the largest ancient castle in the world. It occupies an area of almost 70,000 m², at about 570 meters in length and an average of about 130 meters wide.

As we walked up to the castle, there was beautiful views looking over the landscape. 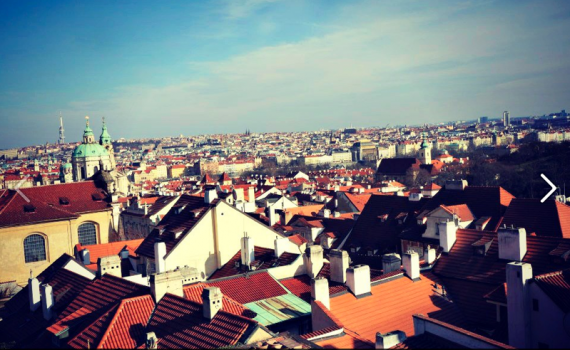 After a long day of walking and traveling, we all headed back to our hostel and got ready for the night. We did a 20 Euro Pub Crawl that I would recommend everyone that visits to do. It is very organized, safe, and fun for everyone. There are many tour guides that travel from place to place with you throughout the night to make sure everyone stays together, and also it was an excuse to see the city at night. 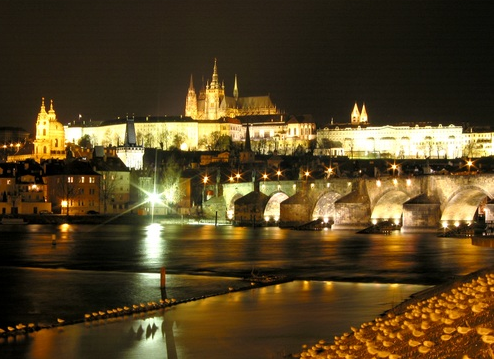 Sunday morning came way too soon, and we had to get to the airport by 7:30 am to catch our flight back to Paderno. I can say that Prague is a must-see place and it has many hidden attributes to its culture that I didn’t expect. I bet there is tons more to see, but that is more of the reason I need to get a very well-paying job so I can revisit all these wonderful places that I have been. I am so thankful for the opportunity to see them at such a young age, and I really applaud Europe for its architectural and cultural beauty that it maintains for all these years, and hopefully many more to come. 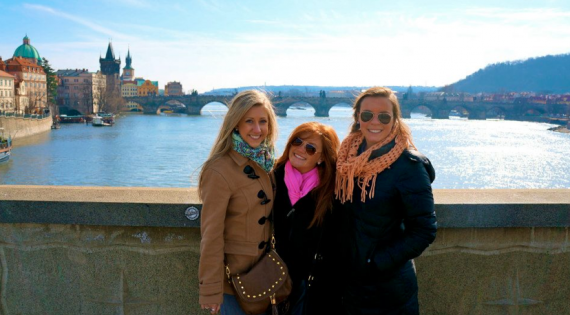