Traveling to Paris is Amazing and Versailles is better! 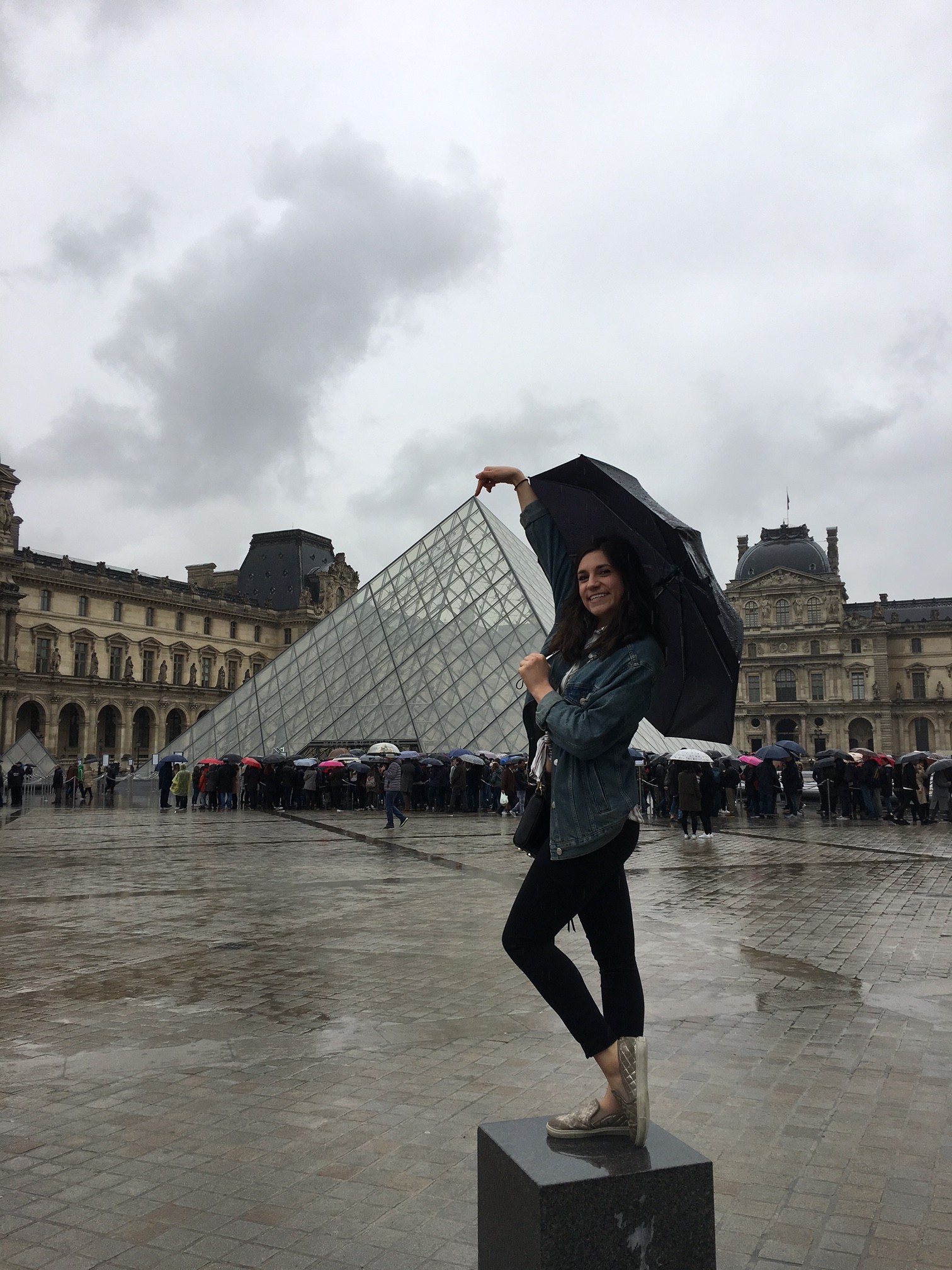 I couldn't possibly leave Paris without taking a cliche tourist picture with the Louvre. 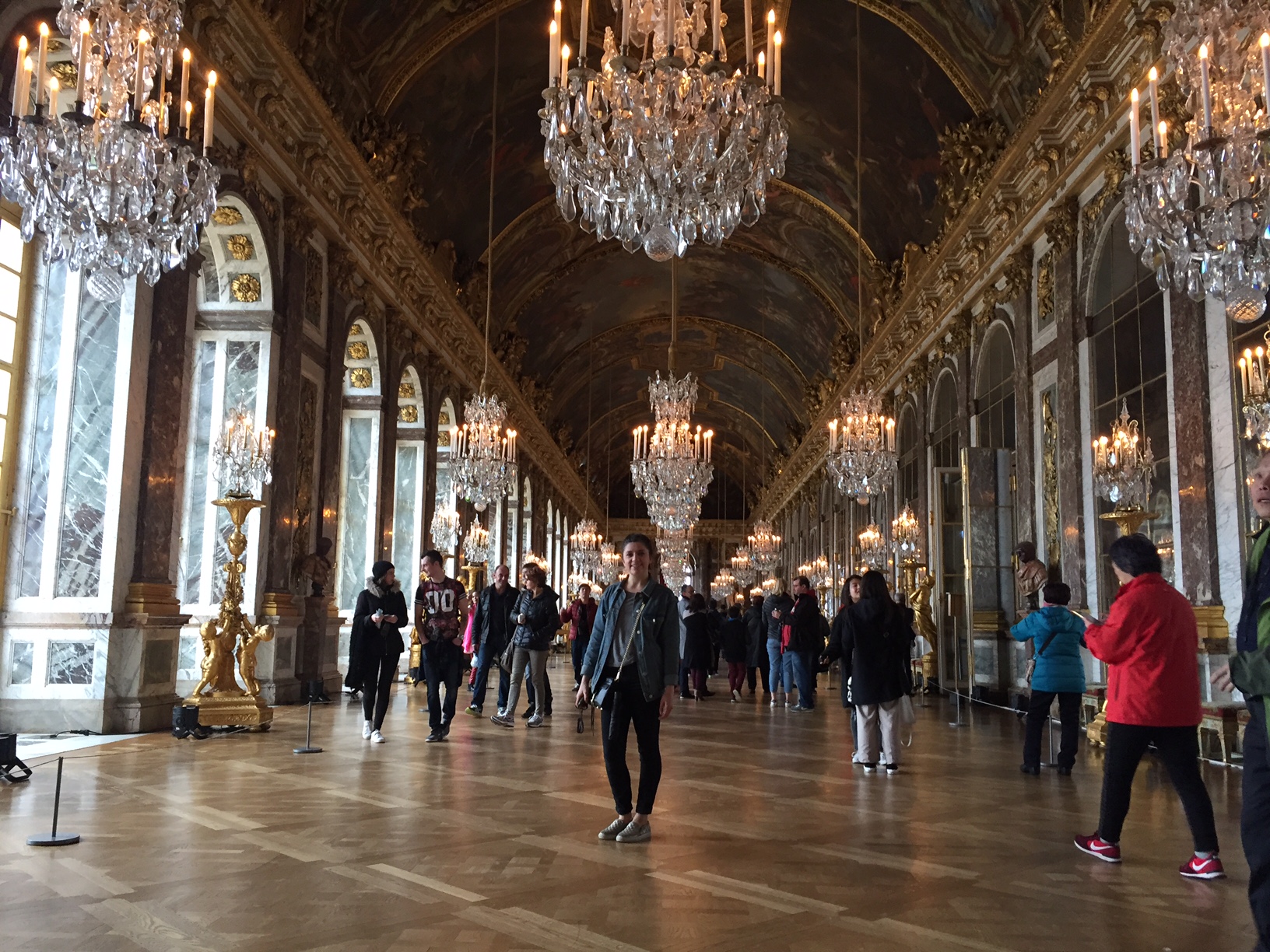 The hall of mirrors in the Palace of Versailles 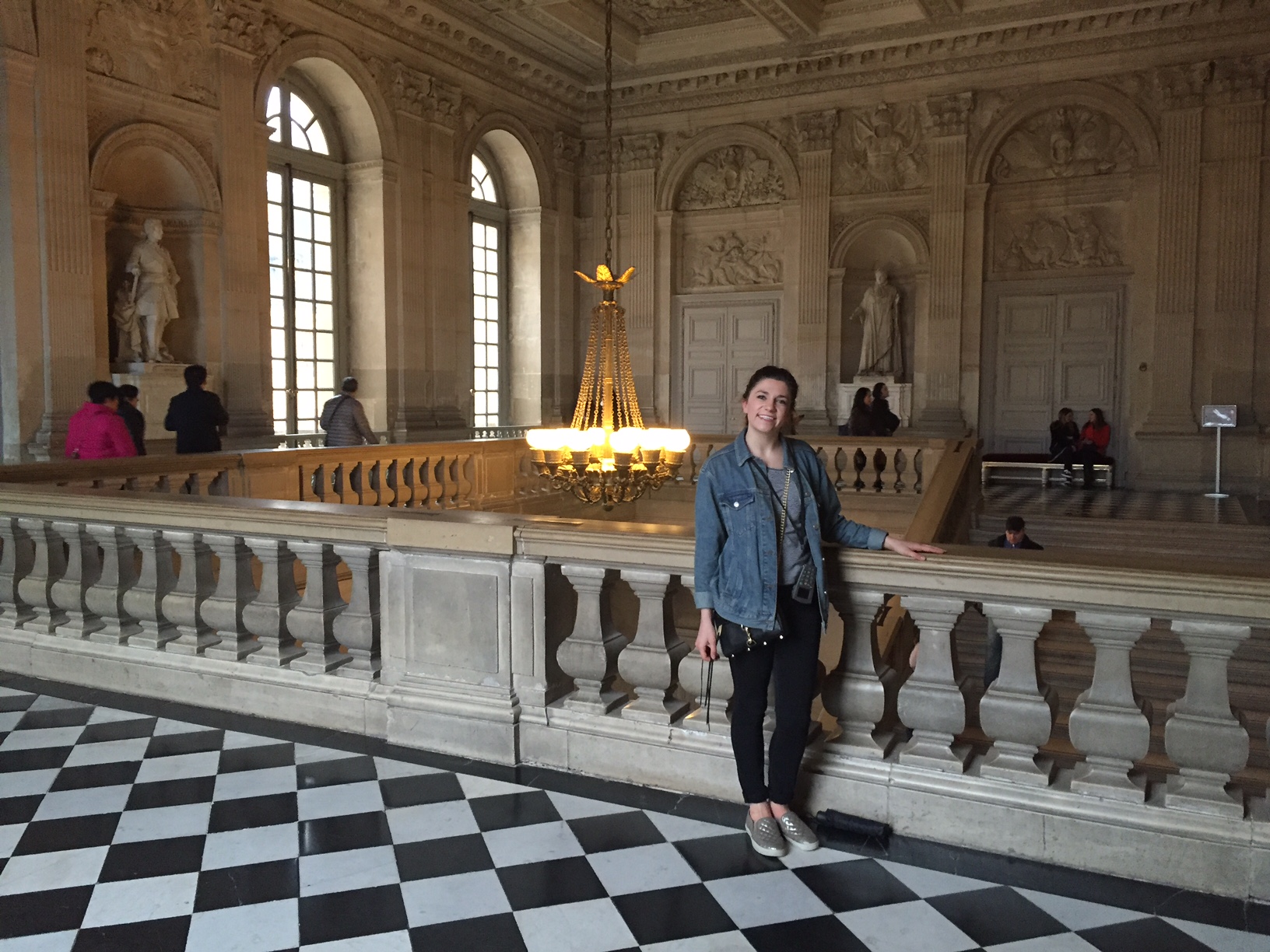 Inside the Palace of Versailles 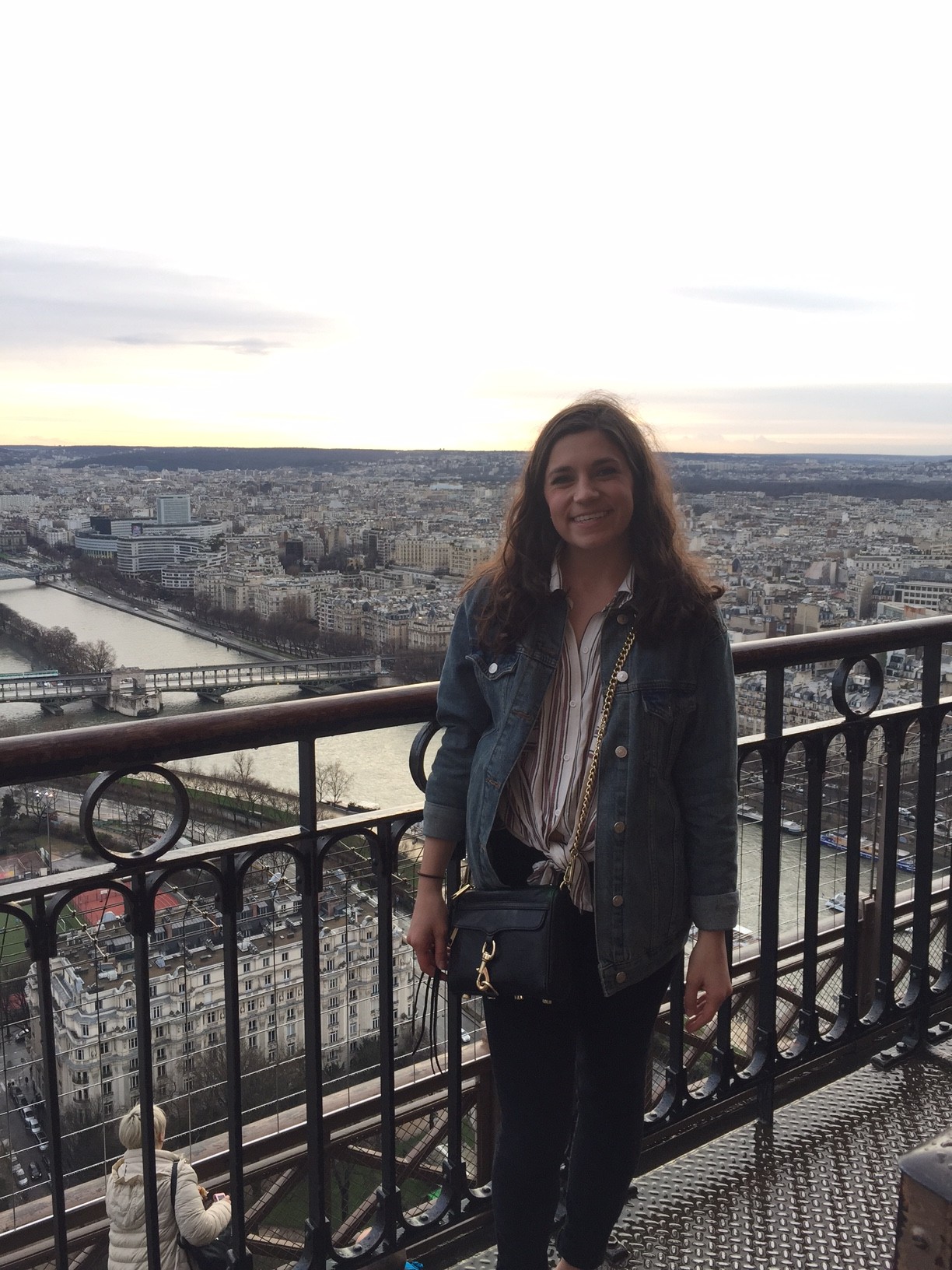 View of Paris from the top of the Eiffel Tower 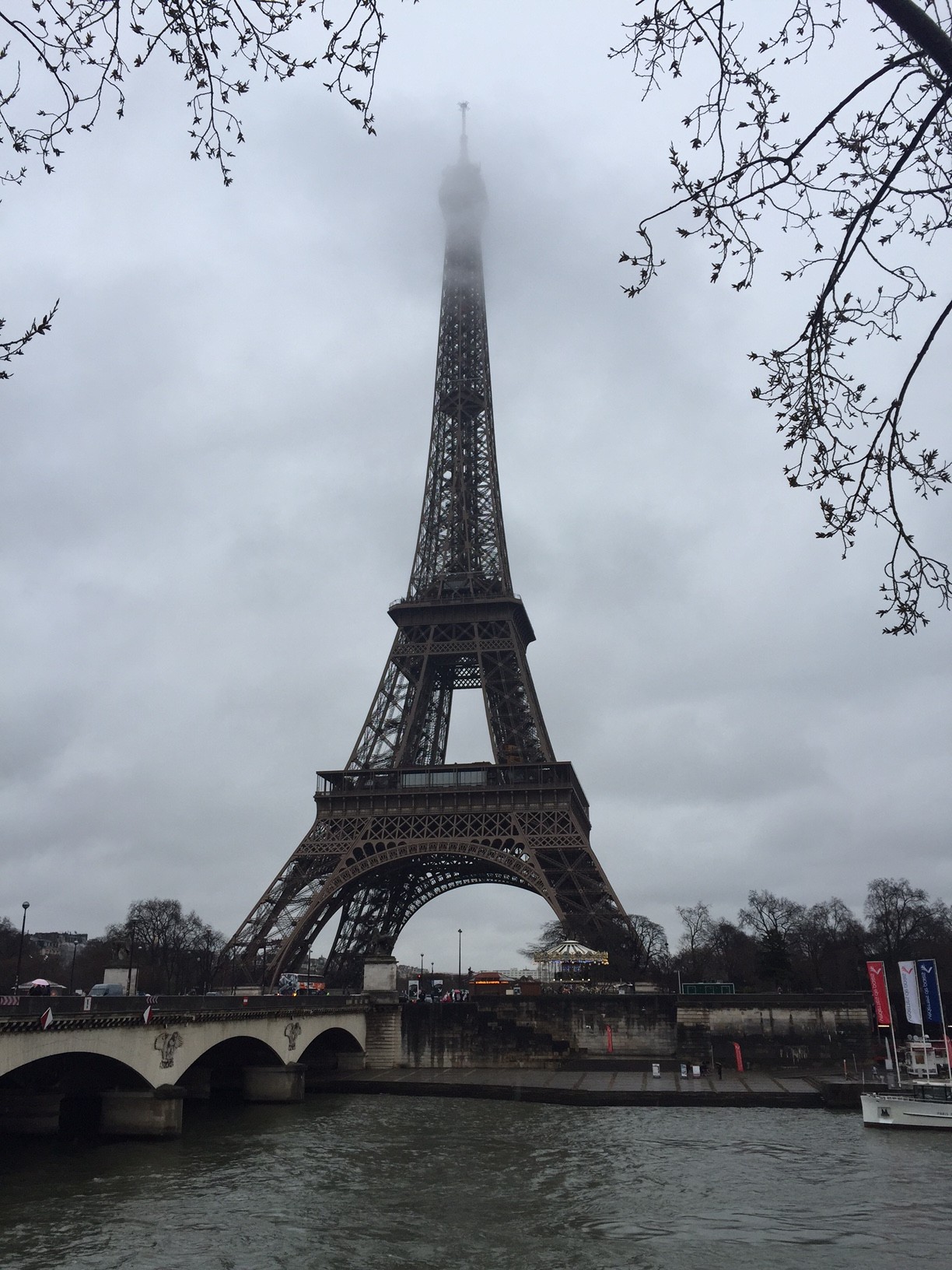 The Eiffel Tower covered in fog! 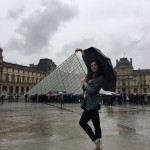 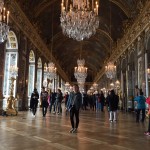 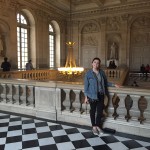 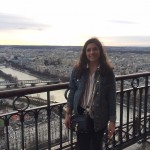 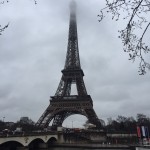 Ciao! Or should I say Bonjour!

This past weekend I travelled to Paris, France, and I can now say I have a new favorite city! Paris blew my expectations out of the water, and I am counting down the days until I can go back.

The couple of days leading up to the weekend were what seemed like the longest days of my life. Every time I talked to anyone in my family they were just as giddy about me going as I was, which only made me more excited. We finally got on the plane after about a half hour delay but looking back I think it was a blessing in disguise.  The tower is lit up at night, and every hour it sparkles for about 5 minutes. Our plane got lucky because not only could we see it as we were landing, but it was also sparkling!

Our cab ride from the airport to the hostel was an adventure in itself. Europeans might be some of the worst drivers I’ve ever come in contact with, and that’s saying something considering I learned to drive in Texas where people drive about 20 miles per hour over the speed limit like it’s no big deal. We were dodging cars left and right to get to our hostel, but our cab driver was super nice and started pointing out all the cool landmarks and things to see along the way!

I was so excited to go to bed because it meant I was that much closer to getting to explore this amazing city I’d been dreaming about for years and years.

To further prove the American stereotype abroad, the people I went with and I all got tickets for the “hop-on-hop-off” bus, which allowed us to tour around the city in a giant tour bus. I hated being a tourist rather than a traveler, but I am glad we did it because there was no way I would’ve been able to successfully navigate the city through the subway systems with a phone that works like an iPod touch since I never ended up getting a European SIM card (they were actually a lot more complicated than I originally anticipated). I got to see everything I wanted to see while also having the ability to get off the bus and do my own thing, and when we were ready to continue on the route, we just hopped on the next bus that came!

Before I left for Paris, I talked to my grandma, and she told me all about the different things I needed to do while I was there. Paris has and always will be her favorite city so to say she was jealous of me was a bit of an understatement. I asked my grandma about the Palace of Versailles, and she told me I absolutely needed to go and that given the option of touring around the Louvre and going to Versailles, I should do Versailles.

The hostel we stayed in offered a shuttle bus to and from Versailles that left early in the morning. I was planning on going with a few other people from my group but when it was time to wake up and get ready to leave, the people I was going to go with decided not to go. I had to make a decision between going to Versailles by myself or doing something else around the city.

Let me just step back for a second and say that I was absolutely terrified to come to CIMBA because I didn’t know anyone and I thought I was going to be alone the entire semester (I was extremely wrong). I also worry about EVERYTHING. I am one of those people who is always 20 minutes early wherever I go because of the thousands of “what if” situations that could happen so in my mind it is better to be safe than sorry.

Naturally, I am sitting in the hostel at 7:15 am thinking about the different pros and cons of whether or not I should go to Versailles by myself. I thought about how studying abroad is supposed to get you out of your comfort zone and how I have played it as safe as humanly possible this entire trip. I am terrified of the unknown and going to a new place in a new city by myself is about as unknown as you will get.

After talking with my sister, I decided that I wanted to go and should, even though I would be spending the day alone. I hopped on the shuttle, and there were two other people who were also alone. I was extremely comforted by the fact that I was not the only loner in Paris.

It was pouring rain when we got to Versailles so that put a slight damper on my mood and it didn’t help that my shoes were soaked after 5 minutes of waiting in line. Regardless of the weather, I was still super excited to be in Versailles and then the unknown didn’t seem as scary since I was starting to get really excited about going in the palace.

While I waited in line to get into the palace, I started talking to one of the people who was on my shuttle from the hostel. We hit it off really well. She is an MBA student from Brazil who is studying in London. After a couple of minutes of conversation, we realized that in several weeks we are both going to be in Amsterdam during the weekend.

I was very excited to have made a friend while I went into the unknown, and I am even more excited that we will be able to meet again in Amsterdam.

I so pleased with my decision to take a leap of faith and travel into a new city alone for the day. And I would strongly encourage people to go out of their comfort zones if they haven’t already because you truly never know what you can accomplish when you are pushing yourself more than you normally would.