Date With a Professor: Pasta Making!

While the ample travel time is clearly a perk of the CIMBA program, I’ve come to find that the good folks here at CIMBA strive to provide cool, cultural opportunities during our time on campus as well.  One such endeavor, “Date with a Professor,” occurs twice during the semester and allow students to take a night off to do something special with one of their professors.  This week, students had the chance to participate in pizza making, a Tex-Mex dinner, or a trip to an osteria (a small restaurant that serves wine and appetizers), among other awesome things.

On Tuesday night, I was lucky enough to be a part of a group that traveled to a local restaurant for a lesson in pasta making.  Our “date” for the night was Professor Chope, an accounting professor from Portland State University.  We arrived at the restaurant and were greeted by Luca, a chef who had grown up cooking – his parents had owned the restaurant for over 40 years.  He escorted us into the kitchen and told us that we’d be making two types of pasta: tagliatelle with a red sauce, and gnocchi with a three cheese sauce.  Sounded good to me!

Luca began rolling out a pile of dough with what was quite possibly the longest rolling pin I’d ever seen, and continued to do so until the dough was so thin and wide that it draped over the counter like a tablecloth.  When asked how he knew when to stop rolling the dough, Luca replied, “I just feel it with my hands.”  That is truly a skill that only comes with years of loving practice. 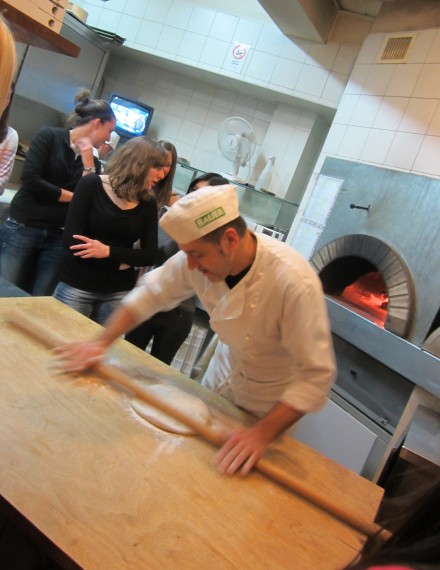 Chef Luca, rolling out the dough.

While we waited for the dough to dry out a bit before cutting it, we helped Luca make the red sauce.  As expected, all of the ingredients were incredibly fresh – tomatoes, peppers, sausage… my mouth is watering just thinking about it.  We also got to work on the three cheese sauce for the gnocchi, which featured a lovely combination of asiago, gorgonzola and brie cheeses.  Once again, Luca impressed us by taking a spoonful of the sauce and, with just one taste, proclaiming, “Five more minutes.”  This guy is truly a pasta master.

We made our way back to the rolled dough, which was now dry enough to cut.  This is where things got really amazing: Luca folded the dough upon itself multiple times until it was long and skinny, and quickly cut it into small slices.  And then, with one flourish of his knife, he swiped through the middle of the folded strips to reveal long, perfect ribbons of pasta.  There was an audible “Ahh!” as the first ribbons were revealed, and then a scurrying of people taking out their cameras in an attempt to capture the graceful act in a picture.

Next, we got the chance to test out our own pasta-cutting prowess.  In order to make the gnocchi dough, Luca mixed together a huge pile of potatoes, along with formaggio (cheese) and egg yolks – which, to my surprise, were BRIGHT orange.  After combining the ingredients and rolling out the dough, Luca invited each of us up one by one to slice our own gnocchi pieces.  It felt so special and fun to be able to stand in an authentic Italian kitchen, next to this authentic Italian chef, cutting authentic Italian pasta.

Another surprising occurrence happened when Luca finally dropped the pasta into the boiling water (which was actually held in the same device that fast food restaurants use to fry French fries!) and left it there for just a little over a minute before declaring it done – another testament to the freshness of the ingredients.  When it finally came time to eat the meal, well… I think you can guess how that went. 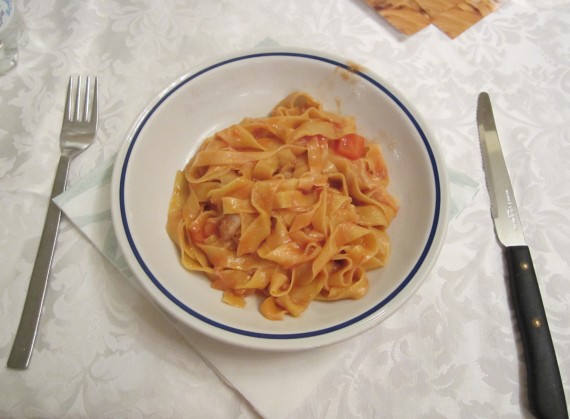 One of the finished products: tagliatelle.

The “Date with a Professor” event provided me with a truly unique experience that I‘m certain I wouldn’t have received had it not been for the CIMBA program.  Aside from the fact that the meal was absolutely delicious, I was in awe of how artful the cooking was, and how lovingly it was prepared.  Luckily, Luca invited us all back to make pizza, so hopefully I’ll get the chance to try my hand at some more Italian cuisine later in the semester!