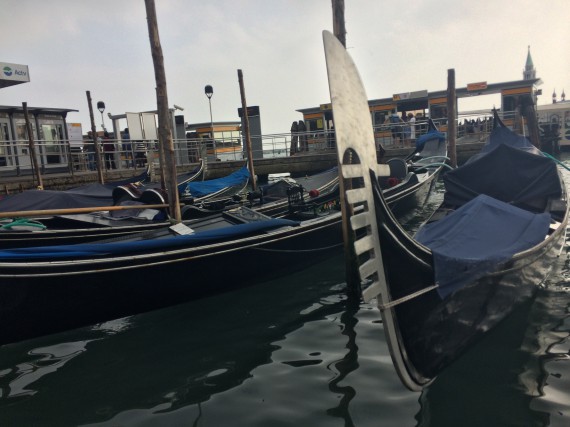 It’s about time that we went to Venice, don’t you think? It required a short and simple train ride. I heard some conflicting reviews about Venice, so I went in with an open attitude. My consensus is….it’s average. I know, a little disappointing. I think if you are ever residing close to Venice you should check it out. It’s almost an open box that you need to check off when you’re in Italy.  Allow me to set the scene. We arrived around 10:00 and were quickly shuttled to a ferry that would take us to various islands off of Venice. 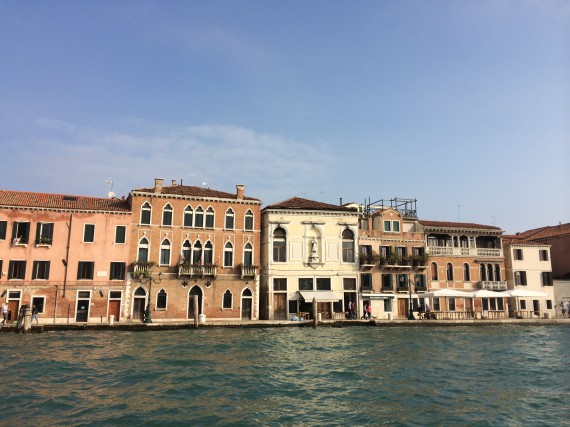 Now this was pretty neat (and need I say, a much better ferry experience than previous trips..), the city is built around the canals. No doubt it was awesome. So we arrived to San Marco Square and were immediately shown Venetian masks and of course- gondolas. 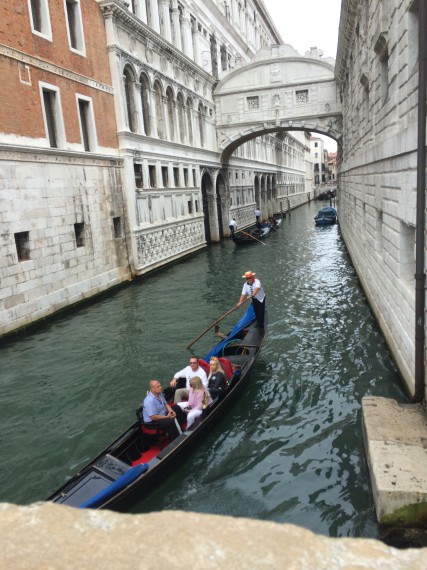 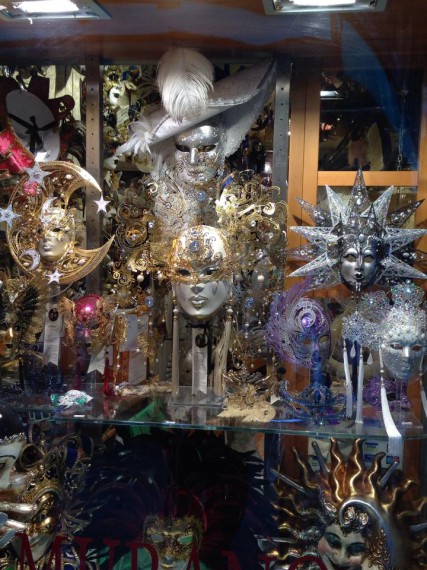 Although they were very beautiful to look at…perhaps with disdain to eliminate desire. Venice is actually very touristy and incredibly crowded. There were beautiful glass beads and jewelry in almost every store. The food was, as it always is, delicious. The San Marco Cathedral was gorgeous too. 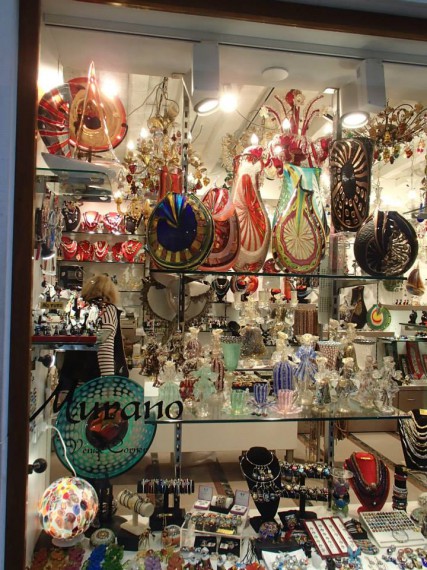 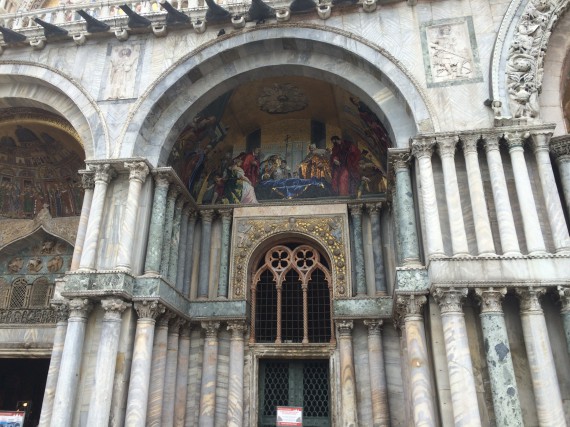 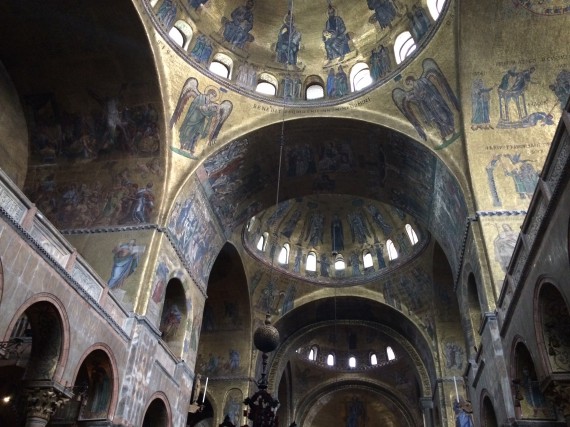 Venice was a great city, but I think I just prefer less crowded cities and more sightseeing attractions opposed to shopping. 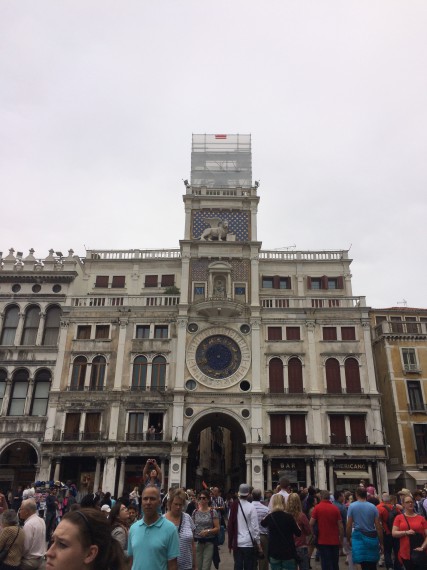 One quick train ride and we were in Verona! Verona is the hidden gem of Italy. As much as it pains me to move Florence to second place on my list of “Best Places in Italy”, I think it must be done. Verona is famous for that somewhat known play, “Romeo and Juliet”. I think I finally understand Shakespeare. This place feels Italian. There are very few English speakers which is what I feel every study abroad student secretly wants. Maybe not. Well it’s what I wanted, to actually be in the culture rather than walking the tourist trail. We arrived into Verona from train- I should just tell you who these people are- permanent travel group (if they will to be so): Lindsey, Sam, and Taylor. [left to right] 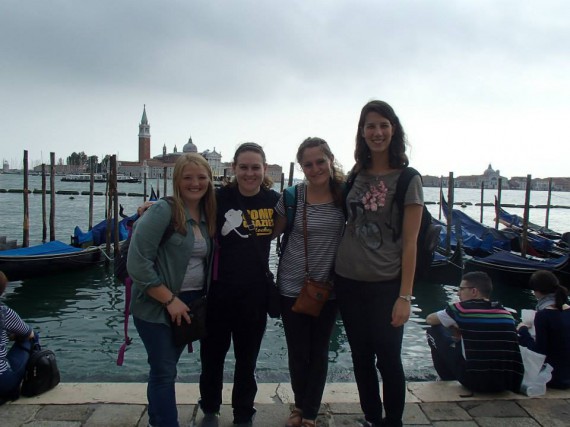 It was evening and the brick streets were dimly lit from the gelato shops and clothing stores lined up side by side. We could hear Italian being spoken from conversations between old friends during their dinners outside. The air was cooler and lighter too, yeah some cigarette smoke but that just doesn’t do the setting justice. 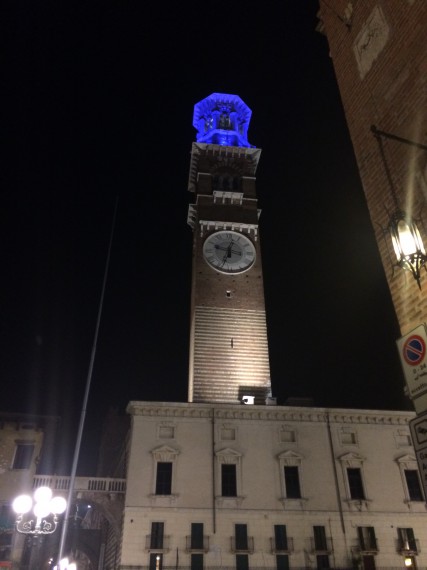 Go Furman! The bell tower is following me!

After walking up and down the roads and mentally noting places we needed to visit in the morning we found our hostel.This place was located one block, one single block, away from Guilette’s (Juliet’s) balcony. Not only that- but a nice 21 euros. After storing our bags in the room we headed out for some much longed-for dinner. Taylor and Lindsey led the way to the restaurant that the hostel owner recommended. We grabbed a table outside and carefully looked over the menu. What kind of blog would this be without a photo of food: 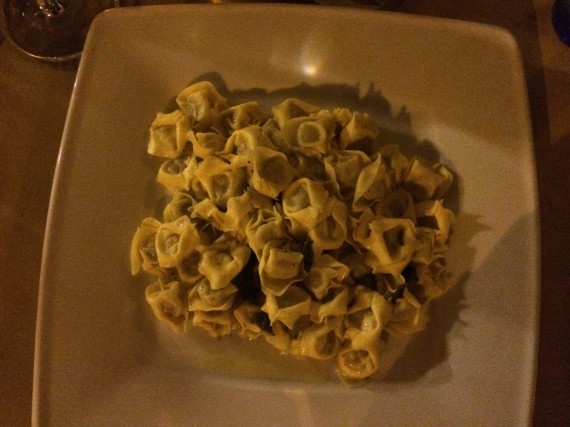 The next morning we woke up with nothing but exploration in our minds. Taylor, Lindsey, and I were able to attend an Italian mass, I wish I could tell I could understand half of it. We grabbed some delicious fresh fruit and picked up Sam at the hostel to venture. Guilette’s balcony was first. 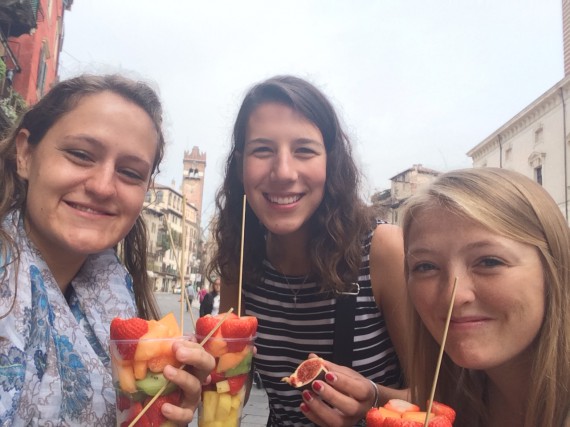 It is gated off when it’s not open and requires a short walk through a tunnel to see it. The tunnel’s walls are incredibly decorated with love notes. I’m not sure what the name is for them or even if they have an official name, but it’s the two initials plus two initials thing. Very cool. 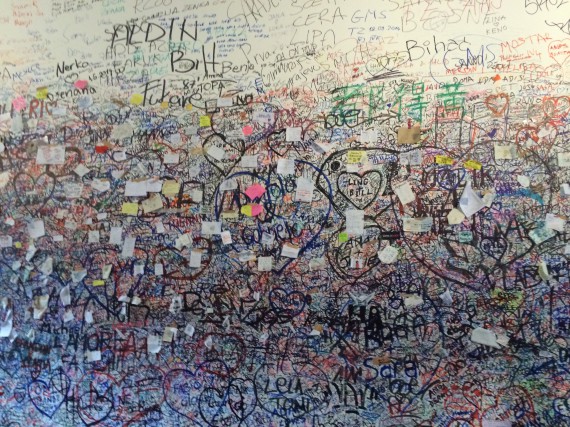 So Juliet’s balcony looks just like a balcony. Oh something weird is that the walls are covered with those love notes and chewed gum. I asked the woman at the souvenir store and she said that’s just a trend that started but apparently now it’s not allowed….I don’t know why they would allow it for it to get to this, kinda funny though. 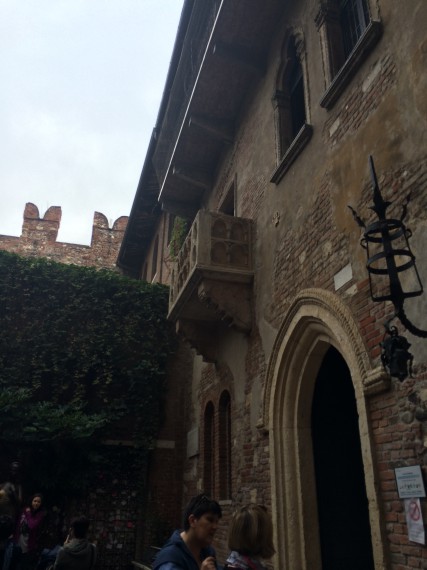 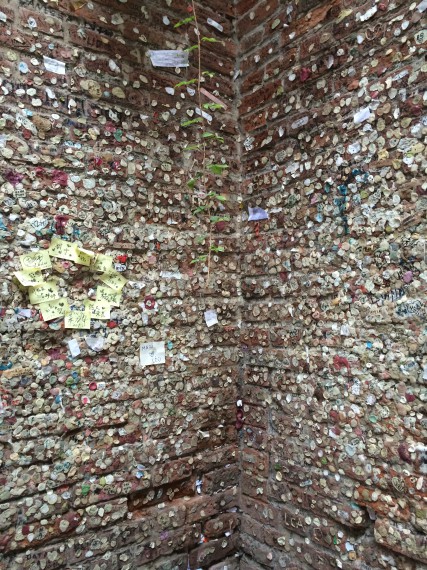 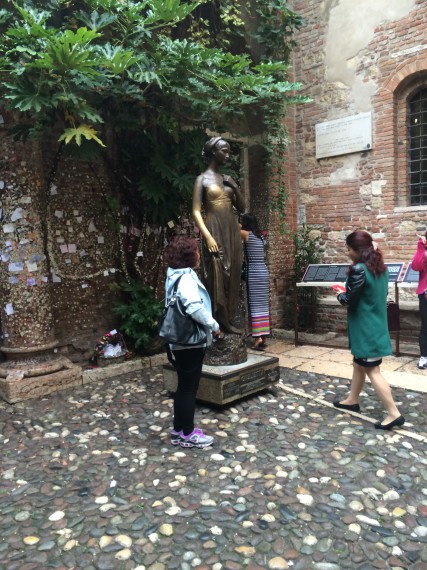 And you see that statue above? It’s good fortune if you touch her breast…Italy is a funny place. Of course we all did it too.

The four of us wrote letters to Guilette. Apparently there’s a movie about this and Taylor asked one of the employees. Those who write letters really get responses- it’s free so what the heck! 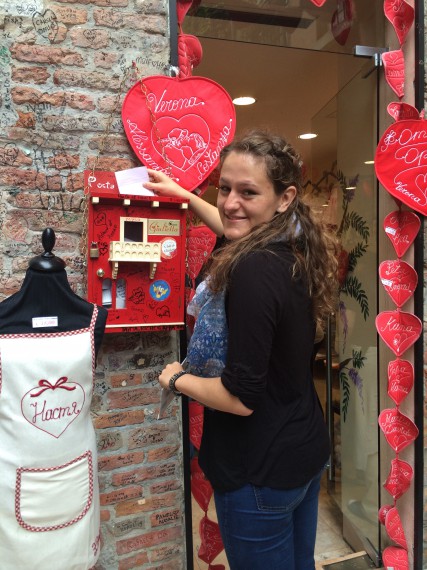 Our hostel host told us to skip Romeo’s balcony, so we were off to the next attraction.The coliseum was the second stop and it was HUGE! We were told it’s older than the one in Rome. Gladiators fought here! They now show concerts and performances which is a strange concept to me- less bloodshed is always good. 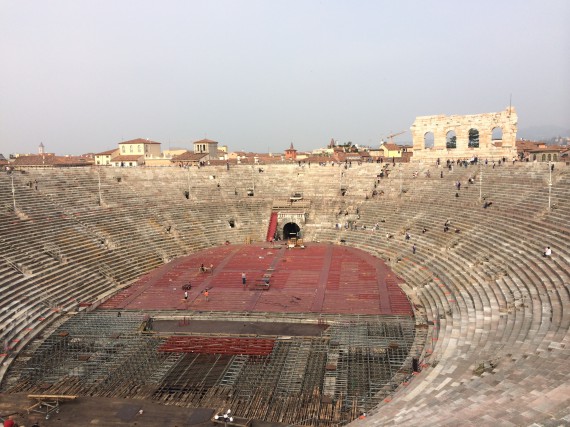 Verona was so amazing. A true(r) taste of Italy. I think this past weekend was a great quick getaway. We did only plan it the Thursday night before. While looking for future destinations, the fierce four of us decided we really needed to plan ahead. Prices are getting up there and the exchange rate is not super helpful.

This past week I had my first coaching session and I think it went pretty well. There were lots of open-ended questions. Such as, “why is that a fear of yours?” and “is that goal what you really want or what you think you should do?”. I don’t know about you, but to an extent I felt extremely unsure of almost everything that was coming out of my mouth. Our instructors talked a lot about how a large percent of the world’s knowledge is actually what we don’t know that we don’t know. I found that to be pretty accurate. If I couldn’t answer these simple questions for myself, how am I supposed to expand my knowledge about other people and places? Self-awareness is a lot tougher than I thought.

Mindfulness has moved up to 8 minutes now. I’m really starting to enjoy it too. I feel like I can better focus on one thing at a time. (*closes Facebook tab)- It’s a process.

This week I will have the opportunity to talk with Italian students and enjoy a meal with an Italian family! Doesn’t get much better than that. I mean, look at this campus! 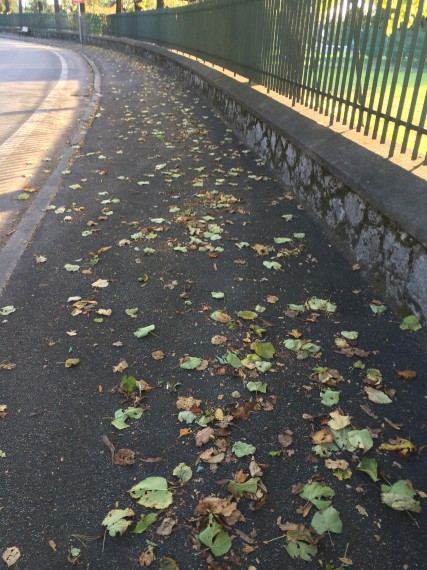 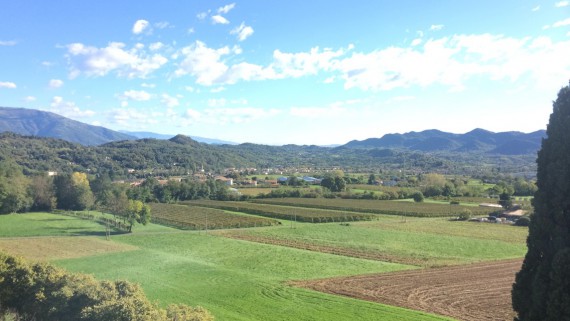 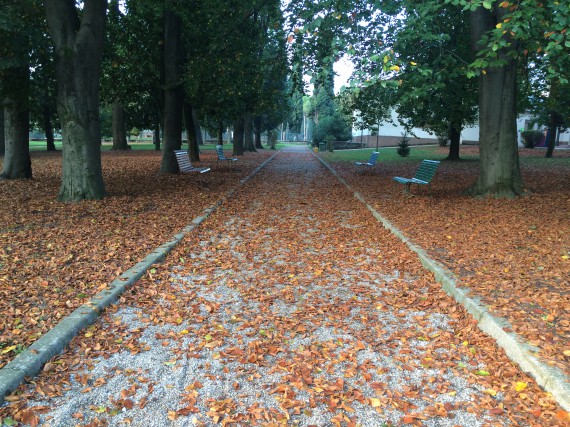