So much happened in such a quick four-day travel weekend that I don’t even know where to begin. Although there were some bumps in the road, overall, it was a success!

My friends and I decided to visit Barcelona and London this weekend. In hindsight, it probably wasn’t the best idea to pick these two cities since they have polar opposite climates. Barcelona was in the high 70s and London stayed chilly in the mid-50s. However, after cramming sundresses/sandals and boots/winter jackets into our travel backpacks we set off for the airport.

Upon arrival to Barcelona, we immediately noticed hand-made protest signs. These signs were made by the citizens of Catalonia, urging the Spanish government to give them the right to democracy. Initially, I was very hesitant to go to Barcelona, especially since the referendum vote for independence was held two days before we arrived. There had been protests earlier in the week, and I was nervous about them affecting our plans.

The city was decorated with the Catalonian flag of independence. After making it through the weekend smoothly, I’m really grateful to have witnessed the Catalans of Barcelona fighting for what they believe in. Not only that, but I’m also very pleased that I ate enough paella and tapas to hold me over until the next time I make my way over to Spain. 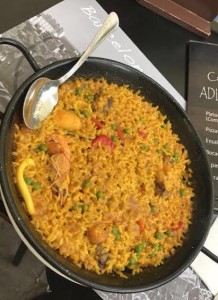 We said our goodbyes to the warm weather and headed up to London. Helpful travel tip: research how the public transportation system works in the city you visit. None of the people in our group knew how to navigate London, which made the visit much more interesting. We ended up getting lost virtually every time we wanted to visit something. 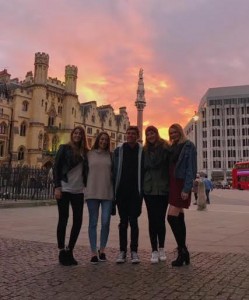 Here is a picture of my friends and I, all smiles before we got lost. In the process, we ended up stumbling on some really cool spots. For example, in an attempt to get to central London, we were so hungry and so out of the way that we ended up in a hole-in-the-wall restaurant for dinner. 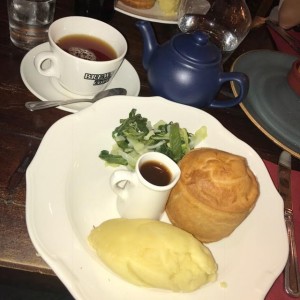 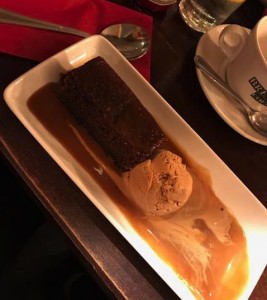 I had the best meal while in London in this restaurant—an amazing duck pot pie and savory bread pudding, shown above. In the end, wandering for 30 minutes was somewhat worth it.

Returning back to our sleepy town of Paderno del Grappa is the most rewarding feeling after traveling. Since we got no sleep this weekend, our immune systems are in rough shape. We are now spending this week recuperating to be set for our travels this weekend! Next stop, Verona!