Never had I ever traveled to Austria… 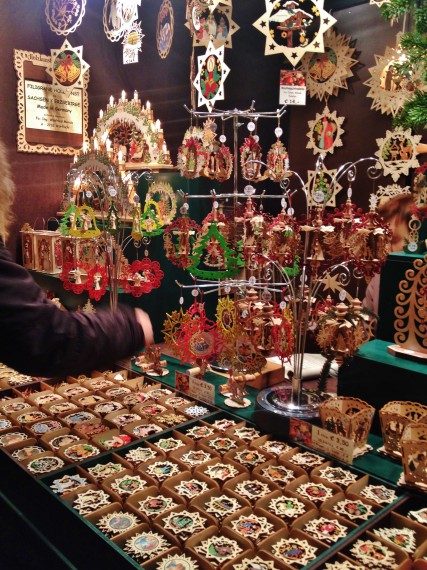 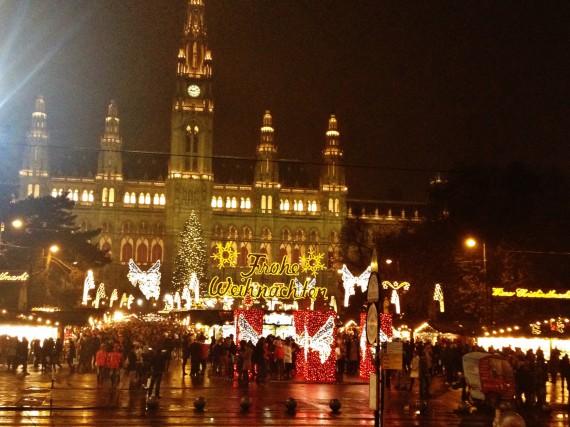 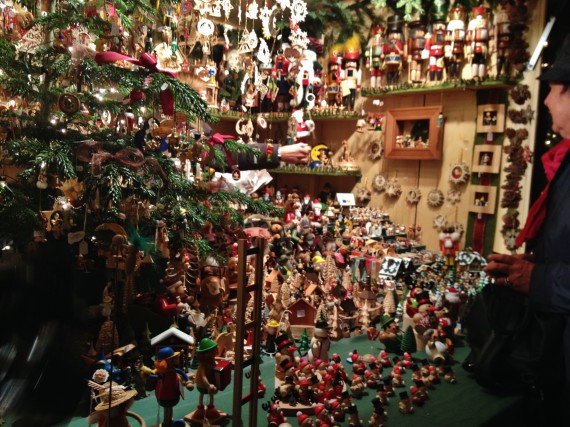 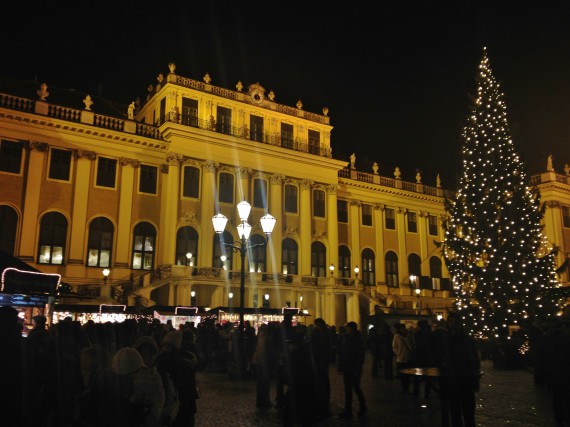 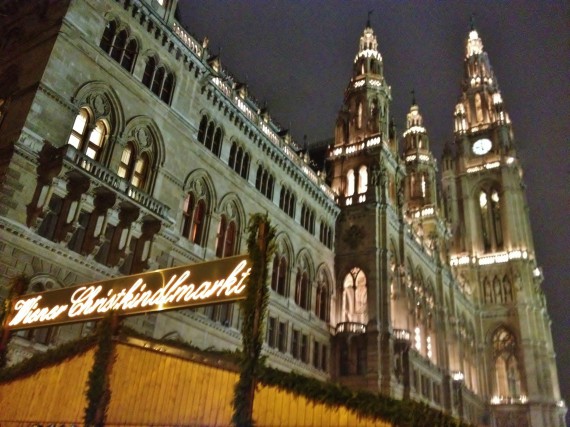 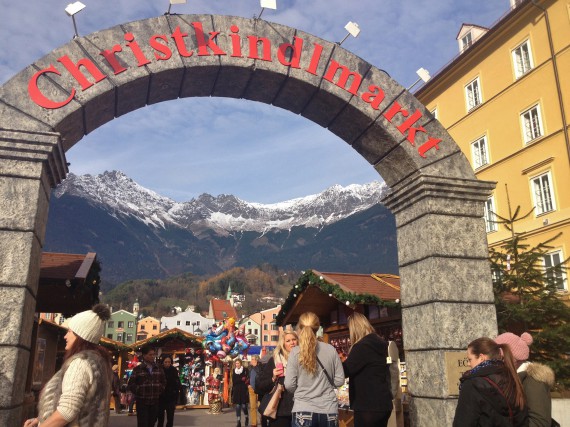 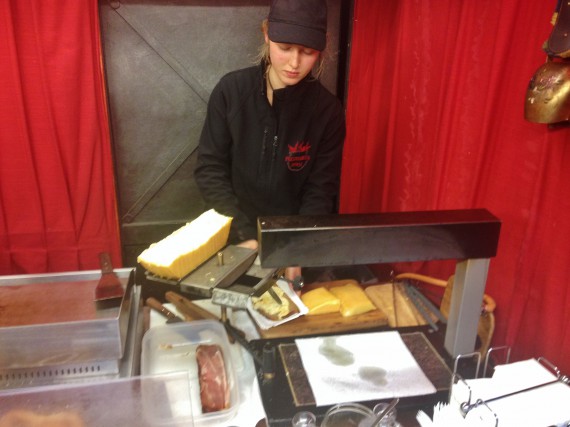 Raclette (some type of bread with cheese melted onto it) 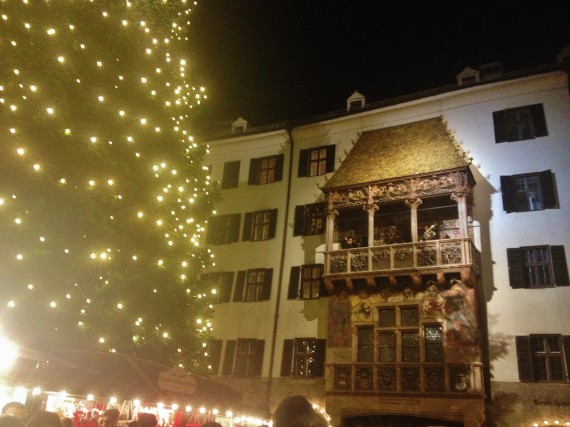 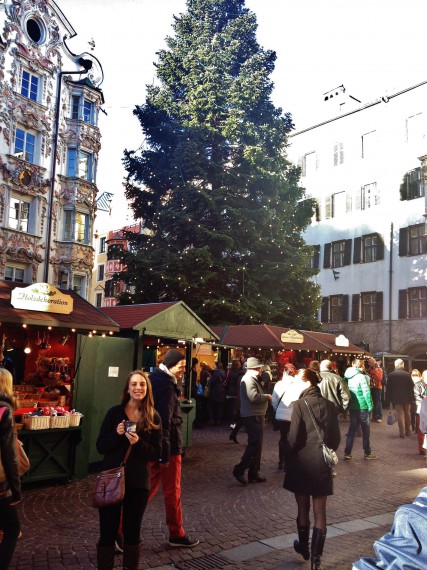 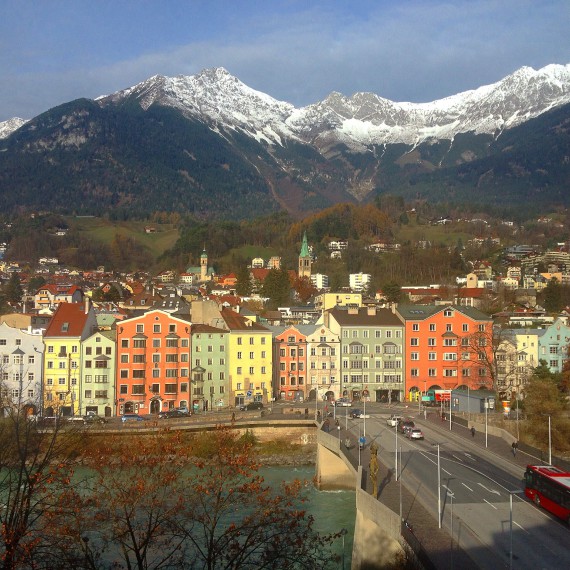 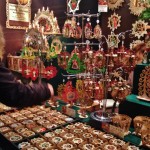 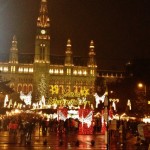 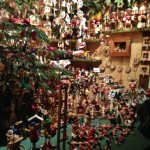 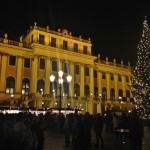 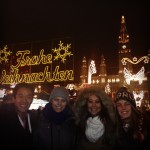 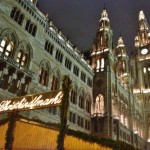 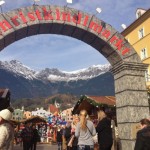 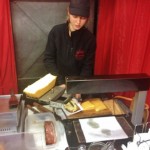 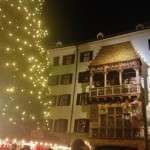 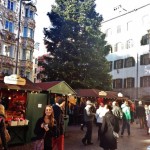 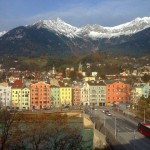 …but the first time I went to Austria, it was so great that I returned for a second time later that week!

In my second to last weekend in Italy, a bunch of CIMBians and I went to Innsbruck, a little ski town in southern Austria, where I had the most magical moment of my young adult life.

The scenery was beyond beautiful in Innsbruck, surrounded on all sides by snow-capped mountains. I explored the city a lot, but where I spent majority of my time were the Christmas markets at Marktplatz and at Old Town.

At the Christmas markets, there were dozens of wooden booths set up with different artisan creations -from traditional wooden children’s toys and decorations to hand-knit gloves; hats and scarves to homemade candles and traditional German foods. The booths were lit by twinkling Christmas lights and hundreds of people made their way around looking for the perfect presents for their loved ones as the holidays approached. It felt so happy and warm at the Christmas markets, though the mountains covered with snow would suggest otherwise. It was here that I discovered glühwein (mulled wine), which is hot spiced wine!! That’s such a crazy concept to me. It’s a traditional cold weather drink, along with it’s fruitier counterpart glühpunsch, served in German countries (and Northern Italy too I I soon found) and it’s pretty delicious. After a day of exploration and food-tasting, I ventured back to my hotel through the market to find that after dark, the markets were still full of people. As I bought a bowl of sauerkraut and bratwurst, I heard the sound of trumpets and saw that everyone had looked up toward the Goldenes Dachl (golden roof) that overlooked the market. A brass band had begun to play Christmas carols and in a huge crowd of people from all over the world, I sipped my glühpunsch and listened under the lights of the huge Christmas tree. It was magical! I felt like the fictional Santa’s village at the North Pole came to life and I was standing in the middle of it! Just a childhood fantasy come true.

So after a wonderful weekend, I returned to CIMBA to plan what I would to for my last weekend in Europe, which was actually four days for Thanksgiving. A friend of mine and I decided to spend a day and a half in Barcelona with a bunch of our CIMBA friends and then meet up with two other CIMBA friends in Vienna, Austria for the last couple of days. BACK TO AUSTRIA! Twice in one week!

After a wonderful Thanksgiving in Barcelona eating paella and drinking Sangria (see my post Thinking Thankfully), we left for Vienna. I was excited to be back in Austria after what I think was one of the best weekends of my entire life in Innsbruck. However, when we arrived it was incredibly cold (thank goodness I bought a warm hat in Innsbruck) and raining and this continued throughout the weekend. Luckily, we found another Christmas market that served glühpunsch to keep us warm and had awesome stuff to keep us in awe. The friends I was with in Vienna had not come to Innsbruck and had not seen a German Christmas market so I was happy to walk around with them and enjoy the traditional Christmas market all over again. In our exploration of Vienna, I found that it felt very much like Washington D.C. with a huge columned white parliament building, etc. We found more markets throughout the weekend to enjoy at Schloß Schönbrunn (the Schönbrunn imperial palace) and at Rathaus (town hall). It was a wonderful time with wonderful friends and I’m so happy I got to experience this twice. It made me so excited for the holiday season with my family upon my return to the U.S., which made the transition back much easier.

We use cookies to personalise content and ads, to provide social media features and to analyse our traffic. We also share information about your use of our site with our social media, advertising and analytics partners who may combine it with other information that you’ve provided to them or that they’ve collected from your use of their services. You consent to our cookies if you continue to use our website.OkayNoRead more