This past week the class of Spring 2012 got our chance to participate in a beloved CIMBA tradition, a soccer game verses the Italian students!  This highly anticipated game is complete with spectators and a referee.  The past 2 semesters the CIMBA team has managed to beat the Italian team at the sport that is at the very core of their culture.  Ok, so that might be a little dramatic, but a lot of Italians do take their soccer very seriously!  This year our team was made up of a group of students that have been playing informally on and off throughout the semester.  Our team had a wide range of abilities from players that that really knew their way around the field (one girl even plays for her home university!), to some people who had never played an actual game in their lives!

The night of the game students, faculty, staff, and even some parents that were in town gathered at the field to cheer on players.  The CIMBA team was pretty intimidated when the Italian team showed up with an actual coach and real uniforms!  Although it was clear that the Italian team was a serious team that held regular practices, our team held there own and made some really great plays!  In the end the Italians won with a final score of 6-4. 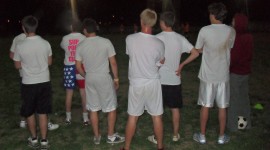 Some of the team watching from the sidlines! 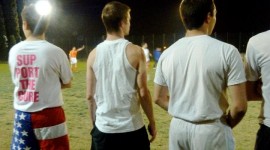 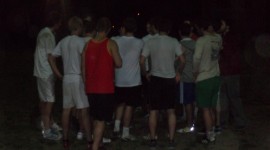 This soccer game was a really fun event for both the team and the spectators.  Even though it didn’t end like we wanted, there is always hope that next semester’s team will win back the title for CIMBA!  So, for any future students reading this, start practicing now! 🙂

Until next time, ciao!