So this past weekend, which was short (unfortunately) (but still awesome), my friends from my engineering class and I (11 of us total) decided to take a trip to Florence! When we arrived, we put our stuff away at the hostel because we were lucky/large enough to fill a room, so that we could lock it. After dinner, we walked over the bridge to climb up to a piazza (plaza) on top of a hill to over look the city. This is the view of the waterline as we were crossing the bridge. It was absolutely gorgeous! 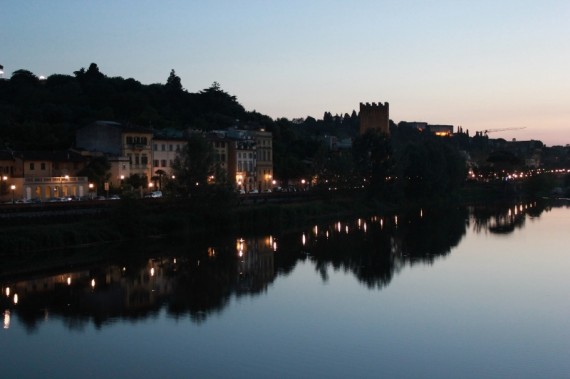 Again, a stunning picture of the city just after sunset. This was taken as we were just over halfway up to the plaza. 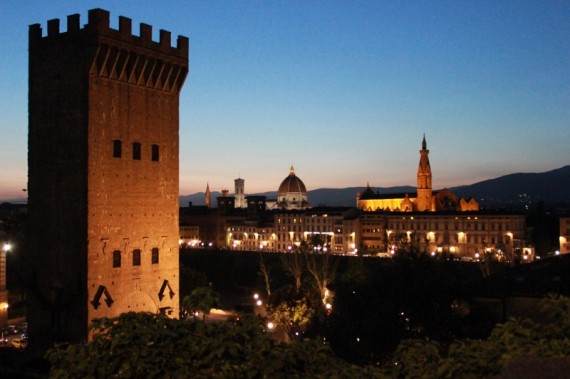 We finally made it to the top and got a nice-looking person to take a picture of all of us! 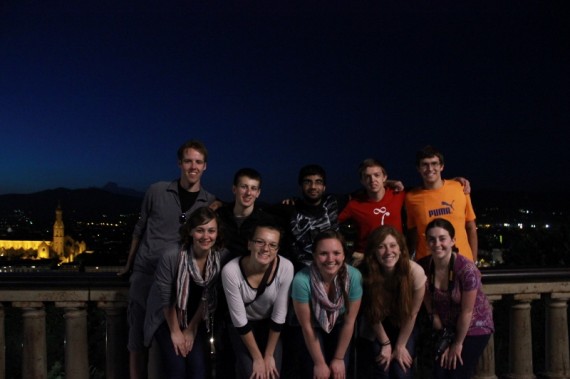 By then it was getting kinda late, so we decided to head back for the night, because we were getting up super early( okay, 7AM…).

We got up early, because our first stop of the day was seeing the Statue of David in the Accademia Gallery and we didn’t want to wait in line during the middle of the day. David was cool, much bigger than I expected. The rest of the gallery was interesting as well– lots and lots of pictures of Jesus and Mary and everyone.

Next stop after the Gallery was to climb the Duomo. Duomo just means “dome” in English. Its really just a huge church dome that people climb because it has great views at the top. Unfortunately, the climb up isn’t nearly as pleasant–very small staircases that seem to literally go on forever. My camera tried to compensate for that, so the picture looks much, much brighter than it actually was. 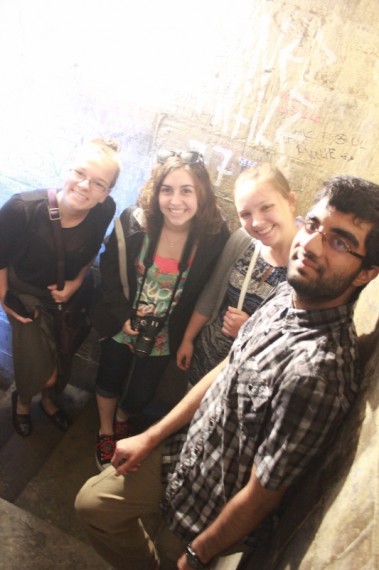 But we did finally make it to the top– 463 stairs later. And look at that! The view was most definitely worth the climb. 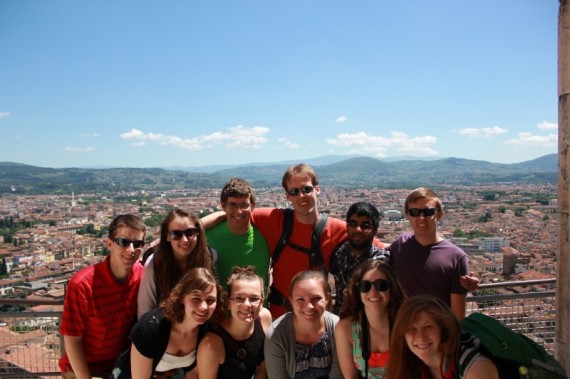 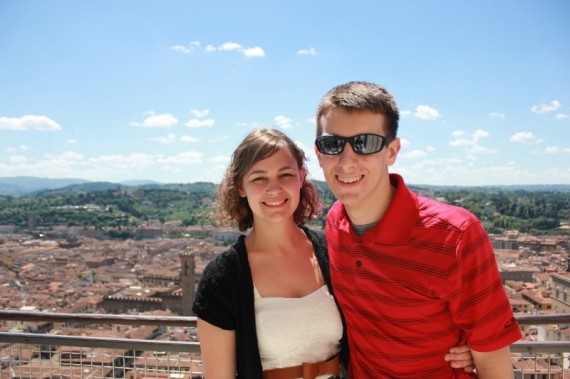 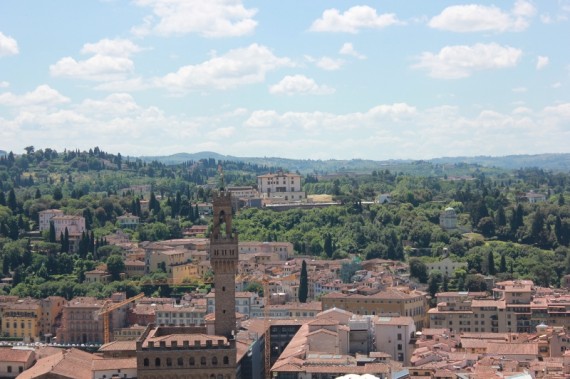 After this (and a gelato break) a few of us (the brave ones) also climbed up the bell tower that was right next to the Duomo, partially because (a) we wanted to see the Duomo from above, and (b) we weren’t afraid of climbing up what seems like a million stairs anymore. The view here was pretty neat here too, but I personally enjoyed the Duomo more. 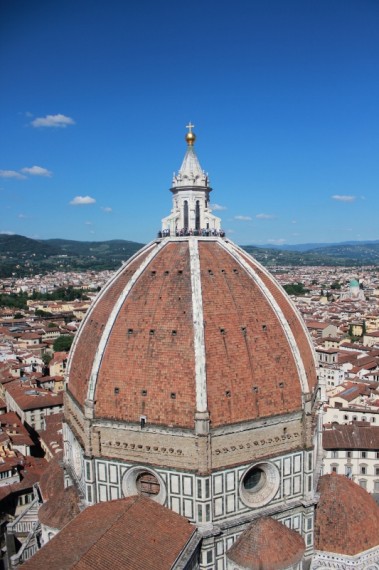 The rest of the day went fine, we were pretty tired after all the stairs (understandably), so we actually went to bed pretty early. But before that, we went to a concert that was recommended to us by the receptionist at the hostel we stayed at. It was an acoustic funk band, which actually turned out to be pretty neat! It was way off the beaten path for 99% of tourists, so it was really cool to experience real Italy instead of tourist Italy for a while. The main event, we found out, was not the band, but the football (soccer for all you Americans) game that was shown on the projector after the performance.

After that, the next morning was fine, just wandering around and eating copious amounts of gelato until the train left. Here is where Adventure 2 starts…

Our group was split up between 3 different train itineraries on the way back because of booking issues. One would think that this wouldn’t be a big deal… Anyway, our schedule was to take a train into Venice, and catch one from there to get back to campus. So we get to Venice, and decide to wander around a little bit, because we have an hour or so before our next train. I like to caption this next picture “Before It All Went Wrong.” 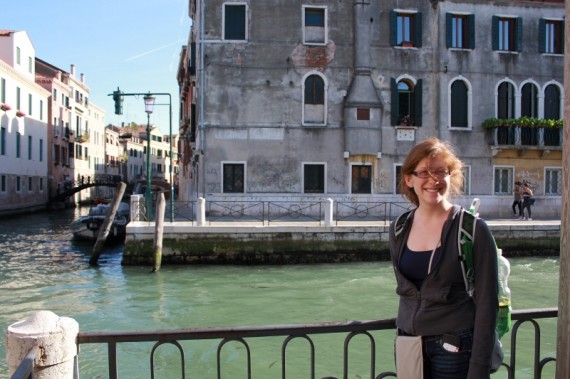 After I took this, we went back to the station and tried to find out what platform we were leaving from. We couldn’t really find a train number on our ticket, so we (very VERY wrongly) assumed that it was the one that was leaving at the same time as we were scheduled to. It’s final destination was not Bassano, where we were going, but we just assumed we were a stop along the way.

So we get on the train, and everything is going fine, just chatting and getting excited for dinner when we arrived back on campus. We get to Padova, which is a stop along the way to Bassano, and figure everything is still fine. The train leaves the station, and for a while after that, we notice that it isn’t making as many stops as it usually does, but we chalk that up to it being almost nighttime, so naturally they are just making fewer stops because it could be their “nighttime route” or something like that.

The conductor makes an announcement, in Italian, over the intercom, and we can’t understand it, so we don’t make anything of it. Until the train starts slowing down, and we are seeing signs for Bologna Centrale…and everyone is getting up. Slowly, putting this together, we ask a guy near us if this is the last stop. He says yes…

It is now almost 9PM and we are in Bologna, not Bassano. Hurriedly, we go and ask around for where the customer service/ticket counter is. We get there, and the man behind the desk just goes “Oh wow…” in the “oh-wow-I-don’t-even-know-how-you-messed-up-this-badly” kind of way.

Long story short, we got a ticket back to Padova. The catch was that no more trains were running out of Padova after 9. We then called campus to try to figure out what to do, and they told us we would have to call a taxi from Padova to get back. We started calling, and the third guy we called said he was able to come get us, and we eventually got back to campus just before midnight. 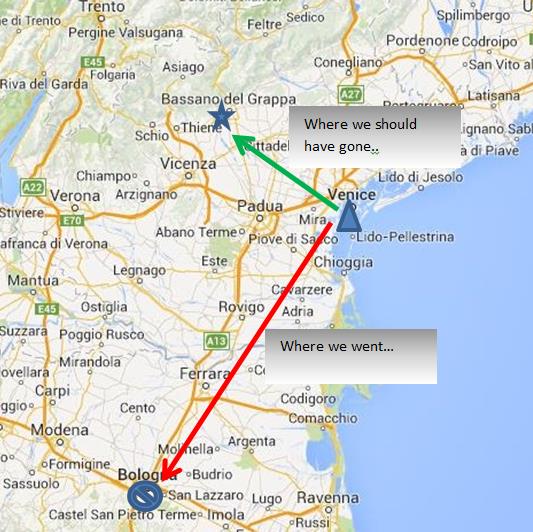 It probably doesn’t seem that dramatic, but my goodness it is hard to keep your head straight when you are in a foreign country, with little to no knowledge of the language, and you are lost and needing to be somewhere.

But the important part is that we did get back safely and fairly quickly. And we learned (a) to always ALWAYS check the train number and (b) to laugh at our own stupidity. Plus, it was a great story to tell at breakfast the next morning!