Can I just begin with the fact that my mind is exploding at the fact that this trip is already over halfway over? I honestly can’t (and really don’t want to) believe it. There are just so many things to do and places to see and people to meet still! I just feel like I’m just now starting to start getting involved in Italian culture, and it blows my mind that I have to leave soon.

Part of this feeling, I’m sure, is a result of the trip that I took last weekend. After quite a few hours of trying to find places to go, we finally decided on staying around the area and visiting the smaller towns of Ferrara and Ravenna. Originally, we were thinking of a few other destinations in southern Italy, but because of the train strikes (which are a major pain in the butt to deal with), that was impossible. But I’m actually really, really glad that it turned out that way. It was one of the coolest things ever to realize that I was seeing real-Italy instead of tourist-Italy for a change. This also gave us a chance to order not one, but two meals entirely in Italian, which was quite the challenge. It turned out fantastically even though we were completely guessing on what we were ordering!

We visited Ferrara first, which, dare I say, was almost cooler to see than Florence. Well, at least the Duomo that was in Ferrara was cooler. I mean, sure, the one in Florence, “the” Duomo, was bigger, and we got to climb in it, but the one that we saw this past weekend was absolutely breathtaking. The inside was much more decorated, but even besides that, I think that the best part about it was the fact that it didn’t feel like a tourist destination. It felt more like an actual church, which is what it is meant to do. I apologize to all of you reading this right now, because I didn’t take any pictures of it on the inside. They were giving services while we were touring, and I feared even making the shutter sound from my camera. Here’s the outside though! 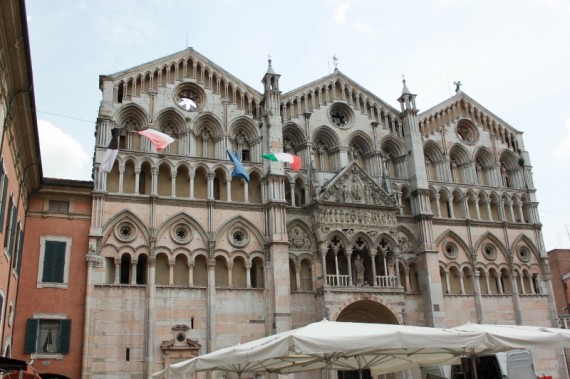 Besides that, the other big thing that Ferrara has to see is the castle in the middle of the city. It even has a moat! 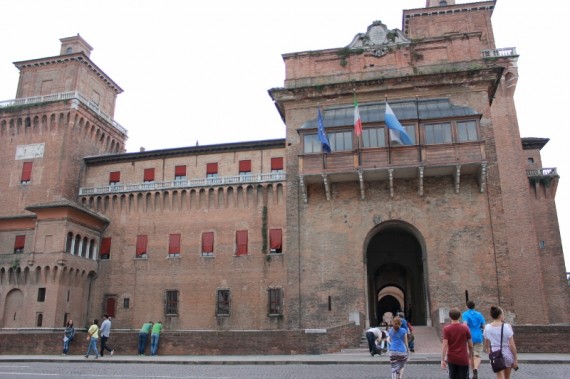 It really showed that we were a big group of engineers, because we spent more than a few minutes looking at the drawbridge and reveling over how cool it is. That’s Evan G. against the wall, Jessica T. in the back, and Sydney K. looking great in the front. 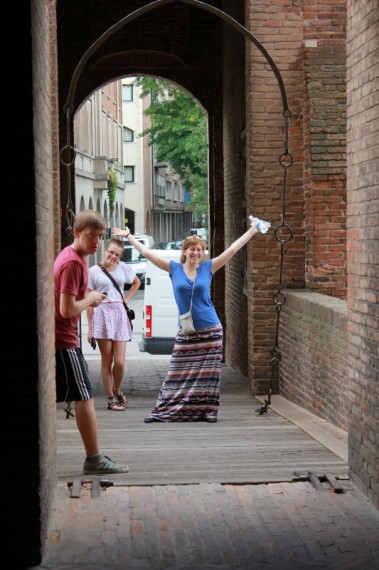 After we saw those, we wandered around the town for a while looking somewhere to eat. This was where I realized that even though I’ve only known these people for a few weeks, I already consider them great friends, and I love how quirky they can be. This happened as I said “This street looks cool, let me get a picture of you guys…” I assumed they knew I meant as a group, but now that I’m looking at it, I like this better.

From the left: Sydney, Jessica, Evan, and Ryan 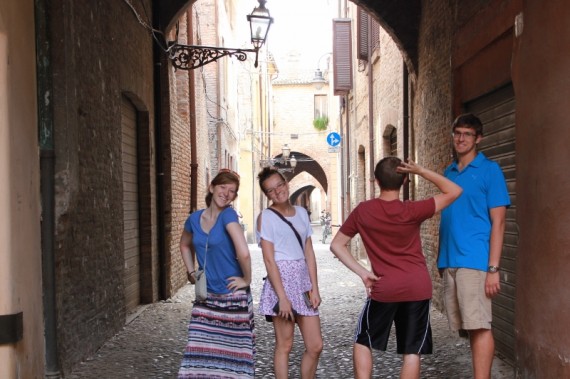 Fortunately, after our meal, it looked like it was about to rain. Yes, I meant to say fortunately. Why? Because it gave us the opportunity to visit the oldest wine bar in Europe. Copernicus, the one who put the sun at the center of the solar system rather than Earth, actually stayed in an apartment above it when he went to university in Ferrara! Even better, because it was in the middle of the afternoon, the business was slow there, so our waiter was able to give us suggestions of wines to try, bring them out, and tell us a little history of each of them. Plus, more group bonding time! This is Jessica and Sydney, trying a rose wine and a white wine respectively. 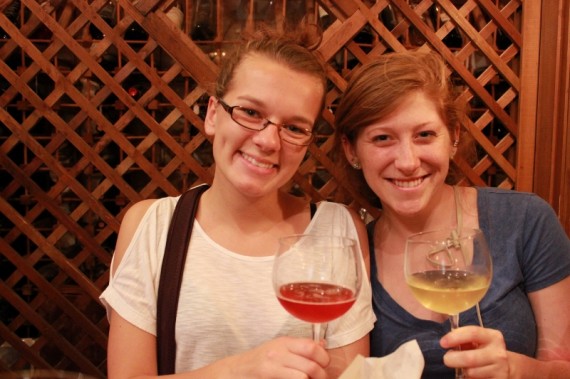 Our second destination for the weekend, as I mentioned earlier, was Ravenna. Ravenna is a beach town on the coast of Italy, and to be quite honest, that was the biggest reason we wanted to visit. Here is where I insert my second apology, because I did not take any pictures in Ravenna. Firstly, because we were at the beach, and sand + water + camera = sad Megan. Secondly, because in the town there was not much to see.

Even though I was able to eat gelato on the beach, what was even better was the friends that we made at the hostel we were staying at. They were also studying abroad, but from the East coast (Boston College to be exact). It was just really cool to hear some of their stories, especially about their host families. I think that is the biggest thing that could have made this trip better (hint hint CIMBA).

But at the end of everything, and now as I’m getting ready to go to Rome this weekend, all I can think about is that I need more time here. I desperately want to be able to come back and experience more, and maybe even learn a little Italian before next time. But I will come back at some point, that’s for sure.