View from the entrance to the Acropolis 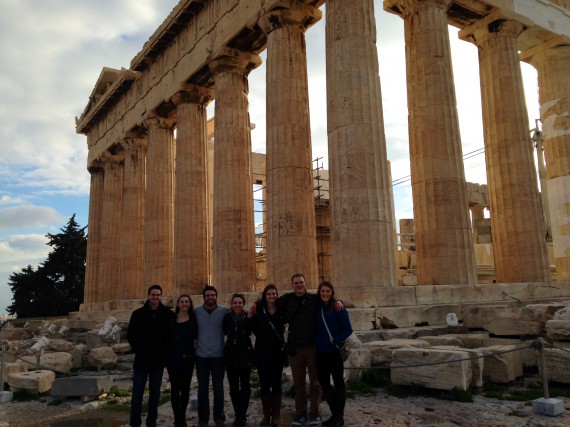 just hanging out at the Parthenon

The Acropolis at night 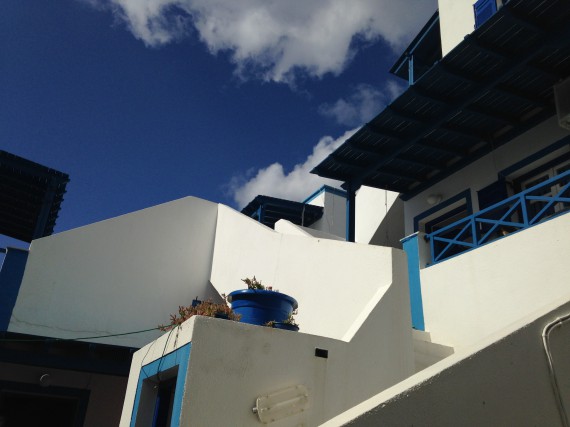 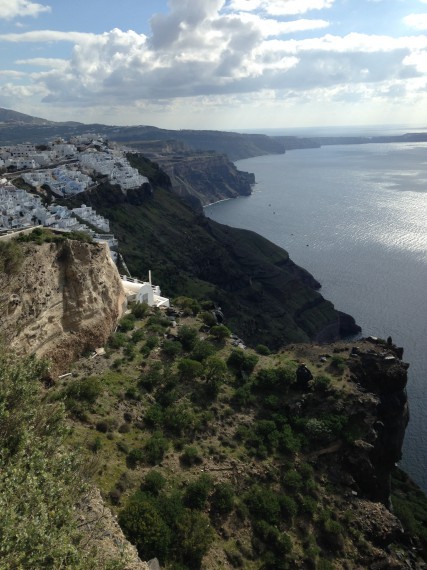 Just a glimpse of the views! 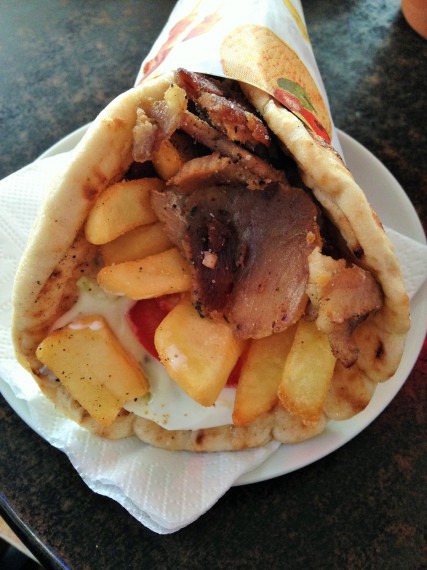 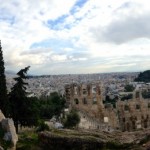 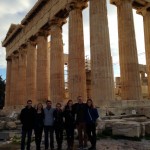 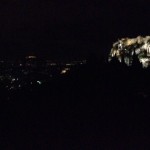 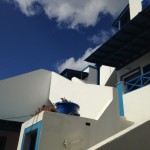 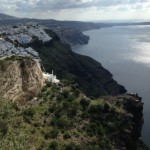 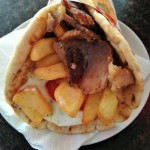 It was the end of week 4 and on Friday afternoon there was an intense vibe in the air around campus as, all the Cimbians were working on their preparation for the first travel weekend, myself included. There was packing to do, tabacchi sandwiches to be picked up and classes to attend. Yeah…about that last part. With the commencement of an exciting weekend quickly approaching, it was obvious that many of us were struggling to focus during lectures, again, myself and even a few teachers included. But, before I knew it, it was 5:20 and the Greek Squad was loading the bus along with all of the other travelers to the train station. Look out Greece, here we come! It didn’t really hit me until we were about half way to the train station the I am actually going to GREECE, a destination that has hung at the top of my bucket list for quite some time. So, it’s safe to say that I was rather excited. The squad made our way from the train station to our hostel in Milan and tucked in for the night so we could catch an early flight to Athens in the morning. This is where thing start to get interesting. Saturday morning after getting all eight of us out of bed and ready to roll to the airport we walked to the bus stop just outside our hostel. Little did I know the stop we actually needed was across the street. We had slightly under three hours before takeoff at this point, and getting on the right bus, but going in the wrong direction stole about 40 minutes out of our travel time that we didn’t have to spare. Oops!
This little mishap caused us to miss the earlier train we were shooting for, forcing us into crunch time. After finally arriving to Milano Centrale Stazione, we hustled our way to the ticket booth and prayed that there was another train that would get us to the airport in time. Lucky for us, there was! After a bit of confusion and running through the station, we definitely got on the wrong train but going to the right place. With some luck we finally arrived at the Milan Maplensa airport but in the wrong terminal. Using some quick thinking from Dan, we took a taxi to our correct terminal and we were finally in the right place, but not exactly at the right time.
We had about 15 minutes to check a bag, get through security and make our flight. Sprinting through the airport, we raced through security excusing our way to the front of the line, we all made it through and continued the haul to the gate. Hearts pounding and sweating profusely, the scurry was finally over as we arrived at the gate without a minute to spare. But all that matters is that we made it. Now it was wheels up to Athens and time to relax from our eventful morning.
Once we arrived in Athens, we meandered our way toward our hostel, but not without stopping for the world’s best gyro of course. Which just so happened to be conveniently located just up the street from our hostel. In case you didn’t know, gyros in Greece have French fries in them which I would assume is their secret ingredient. (Oops, secret’s out now I guess.)

Shortly following our lunch break, we hopped on a tour bus and headed for the ruins of the Acropolis.

Our time there was limited so it was go time, yet again. Also, just a little piece of advice; make sure to bring your student ID if you have one! Or you will find yourself in my boat having to pay twice as much. Luckily for me it was only €12, but there are other places in Europe where this could hit hard. The views and Parthenon from inside Acropolis were absolutely breath taking. Definitely a must-see in Athens. I am still in disbelief that I actually got to see it in real life!

Our Greek vacation doesn’t end here though. By now it was time for some more Greek grub, so we split into smaller groups for dinner and we had some of the most delicious Greek food on the planet, because well, we were in Greece! With our bellies full, we figured we might wander the street to try and catch a glimpse of Acropolis at night, and little did we know the view we would stumble upon. With no particular destination in mind we came across a view point that displayed a picturesque view of Athens and the Acropolis lit up at night. It was quite romantic, I must say, especially considering the fact that it was Valentine’s Day. What a way to spend it.

On day three we were off to do some island hopping to Santorini, a place that has been on my bucket list for as long as I can remember. From the second our plane landed on the island, I could not wipe the smile from my face. This place was absolutely unreal for every second we were there. We were welcomed at the airport by the people that owned Villa Kostas, where we were staying. If you think Italians are nice, just wait until you meet some Greek people. Mary and her husband were amazing hosts to us the entire time, with free shuttles from the airport to breakfast in the morning, and mapping out options of things for our crew to do – they really made us feel right at home. Even their dog, Valentino!

As soon as we settled in, we headed for the black sand beach that was mere steps from Villa Kostas. Again, this was incredible and a wonderful change of scenery, being able to watch the waves crash in on the shore. By this time, yet again, our stomachs were grumbling for some more delicious Greek food, so we came across a restaurant in the beach called Lava. After asking for suggestions from the owner, he offered to bring us a variety of different dishes. Willing to try new plates, of course we agreed. Before we knew it, a Greek feast was upon us. I think we made the right decision. The best part was, he inly charged us €8 for everything!
Now that we were fueled up, we made our way to the old capital of Santorini, Fira. From there we hiked what felt like a marathon, but in reality was about 9 miles to the the tip of the island to catch the famous sunset in Oia. One of the best decisions of my life. Hands down. These pictures pale in comparison to the really thing, but just to give you an idea…

Our last day was spent exploring other areas of the island, soaking up as much time in paradise as possible. In the end, one of the most unique things that I learned about Greece from Mary, our host in Santorini, is that there is “more wine than water, more churches than houses, and more donkeys than people” in Greece. It is safe to say that this place made it difficult to go back to CIMBA, but another exciting week awaits concluding with a weekend in Bolzano, a small town in northern Italy with a lot of German influence.

Not only was this an adventure of a life time, but quite the learning experience. I learned so much about what to do and what not to do while traveling, not to mention loads about the Greek culture. With this weekend, including all of the other growing opportunities offered here at CIMBA, I can already see and feel a difference in my confidence and problem solving skills. Not only with travel but in many other areas in my life and I wouldn’t trade this experience for the world. I have said it before and I will say it again, nothing compares to the people I have met here – they really seem to make the difference. I wish every student had the opportunity to participate in this program and get out of it what I already have, lifetime friends, lessons learned and memories made. Until next time!