Last, But Not Least: Lessons Learned From My Trip to Greece

The Odeon of Herodes Atticus

Atop the ancient city of Athens

The Temple of Olympian Zeus

The cobbled pathways and blue and white shops of Mykonos

The Church of Panagia Paraportiani 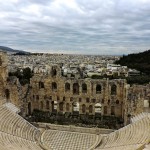 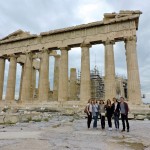 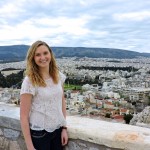 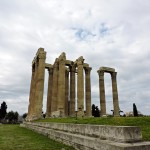 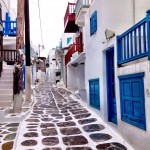 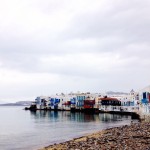 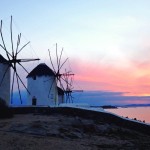 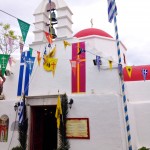 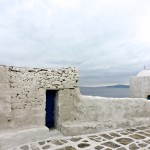 If you asked me six months ago where I planned to visit during my semester in abroad, Greece definitely would not have been at the top of my list. However, when the chance came for me to visit this historic country, I knew I couldn’t pass it up. Aside from getting a glimpse of Greece in the Sisterhood of the Traveling Pants movie, I had no idea what to expect. Fast forward through a few trains and planes, complete with a night spent in Milan, and we had planted our feet in the Land of Zeus.

We kicked off the trip in Athens, the ancient capital city of Greece. After settling into our apartment, we headed into town for dinner and to explore the central part of Athens. The highlight of my night was the stunning 360-degree view of the city from the roof terrace of A for Athens hotel. Seeing the Acropolis, Lycabettus Hill, Monastiraki Square and Pláka sparkle at night was easily the most memorable part of the evening. The illuminated Acropolis dominated the skyline with its golden glow at night, but we still wanted to view the Acropolis up close in daylight.

Early the next morning, we arrived at the entrance to the Acropolis and were pleasantly surprised that admission was free for E.U. students. We climbed up the stairs and passed by a grand collection of ruins, temples and theaters. At last, I laid eyes on the shining icon of Athens, the Parthenon.

Once we reached the top of the Acropolis, I stood in awe and soaked in the fact that I was amongst ruins that were 5,000 years old. I can’t even begin to imagine what the ruins would have looked like originally! The top of the acropolis afforded views of the entire city, as well as other temples surrounding the Acropolis. After admiring some of the most important ruins, we made our way to the Temple of Olympian Zeus. Its massive columns made of stacked marble are remarkable.

From discovering my newfound love for feta cheese to viewing the Acropolis at night, I’m glad I was able to pay a visit to Athens, even if it was only for a brief period of time. We left Athens later that afternoon and boarded another plane to Mykonos, the Ibiza of Greece.

Mykonos offered a unique mix of beautiful beaches, a great village center, and plenty of shopping. As we walked to Old Town Mykonos that evening, we found it to be somewhat difficult to navigate. It was hard to know where to go without street signs and the whiteness of the weathered paths.

We continued touring the town, stopping at Little Venice (Mikri Venetia) on the waterfront. This stretch of coastline was coined ‘Little Venice’ for its stores that sit at sea level and the relentless waves that crash into tourists. The iconic windmills located adjacent to Little Venice are deemed as the best place to watch the sunset. With impeccable timing, we happened to stumble upon the five windmills just minutes before. I was blown away by the collision of intense warm and cool colors, which cast a pinkish hue onto the Aegean Sea.

Despite the rain that followed on Easter Sunday, the island of Mykonos had a unique atmosphere. The streets were lined with colorful flags in celebration and families converged on the restaurants lining Little Venice for brunch. The island itself was still relatively empty, but the port was action-packed with tourists, locals, and stray cats sharing the whitewashed streets.

As we walked through the winding streets, we came upon one of Mykono’s famous landmarks, the Church of Panagia Paraportiani. It is actually five churches built into a compact complex and is one of the most photographed buildings on the island.

Besides experiencing the abundance of Greece’s beauty and history firsthand, this past weekend helped shed some light on my time abroad. While I could ramble on for hours about all the lessons I’ve learned, I wanted to share three of my main takeaways from the last travel weekend.

1. You can’t always control the situation (or weather), but you can control your attitude.

Mykonos enjoys over 300 days of sunshine throughout the year, making it tough to swallow that our longest day there was rainy. While it would have been easy to complain about the weather, I realized that the only control I had is over the way I chose to respond. The dreary weather was a good reminder to concentrate on the things you can control and to let go of the rest. The rain may have ruined my hair, but not my spirits!

2. Sometimes, home has a heartbeat.

Being away from my family on Easter was a lot more challenging than I had anticipated. Like all things, new experiences come at a price. Although I found myself feeling a bit homesick on this holiday, it made me more appreciative to have support thousands of miles away from my new home.

3. It’s okay to not have it all figured out.

Between the countless buses, trains, planes and taxis, I had my fair share of time to sit back and reflect. I’d always thought I knew exactly what I wanted to do with the rest of my life —my dream job, where I hoped to live, and how I could use my strengths to help others. The reality is that living abroad shook my world around and I’m now more confused than ever. While this realization is a bit frightening, it’s exactly what I needed. I’m twenty years old and I don’t have to have my entire life planned out. The sheer fact that my eyes have been opened up to new possibilities is liberating.

Tomorrow marks the end of my time at CIMBA and the start of my travels with my older brother. We have quite the itinerary ahead with stops in Rome, Geneva, Lisbon, London, Edinburgh and Dublin. Check back for my final blog post upon my return to America.