An Overview of Campus Life and Dinner with a Local Italian Family!

Things are finally beginning to settle down around campus – let me rephrase that – a somewhat consistent schedule is beginning to emerge.  The first three weeks at CIMBA were the most engaging and eye-opening weeks I have experienced.  I think it is impossible to convey the exact feelings during these three weeks without experiencing it for yourself. However, I hope my overview of everyday campus life and description of an awesome event I attended, “Add a Seat to the Table”, will give you a better perspective of what I am experiencing here in Italy. 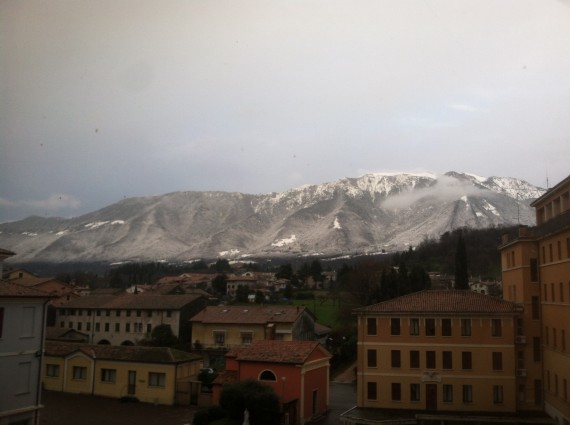 Today marks the end of the first three weeks at CIMBA and thus it also marks the completion of CAP: CIMBA Advantage Program as well as the LIFE seminars and Kepner-Tregoe workshops.  From these programs, I have learned an exceptional amount in an unbelievably short time period.  CAP incorporated travel orientations, cultural seminars, the Da Vinci challenge, and an introduction to the philosophy of CIMBA which were great tools in determining where I wanted to travel, with whom, how to act with locals, and mentally prepare myself for the upcoming semester.  The Da Vinci challenge was a low-ropes team building course that further strengthened our bonds as undergraduate CIMBA students and allowed many students to overcome their fears.  Not only did it teach me a lesson (and leave my body pretty sore the next day), but it was also a blast!  My team overcame physically stimulating challenges together with high energy and a no person left behind mentality.

As I mentioned in a previous blog post, I have already utilized the knowledge learned from the Kepner-Tregoe workshops while traveling and managing my time.  During the first three weeks, not one day was identical to another.  One morning, I had an 8:15am class followed by free time until lunch to read my textbooks, complete online personality assessments for LEAP, or sneak in a workout at the gym.  Other days, I had 9:00am KT (Kepner-Tregoe) workshops followed by travel orientations or Italian language seminars to make sure we are able to communicate with locals.  And then, of course, for three days I was actively involved with LIFE and had no free time other than to sleep and eat.

Now that Week 4 is approaching these activities will no longer be present, but that does not mean everyday will become routine.  Far from it.  Although class times will become more routine, everyday will still present new challenges.  For instance, I have to complete a job description by Monday that will be used to hire REAL workers with REAL money for our Intro to Management class project.  Monday night we have our first gourmet dinner (I am very excited for this!) and an etiquette seminar.  Later in the week we have LEAP seminars before dinner.  On Wednesday, there is an optional yoga class.  Many students have exams already while many do not.  I have a self-test to conduct for LEAP regarding intense workouts and my reactivity levels by Friday and a presentation on my findings the following week.  In addition, tonight is Super Bowl Sunday. Tuesday night there is soccer for those interested and I am meeting with my travel group later today to finalize a weekend trip to Il Carnevale.  The amount of daily activities is staggering, yet exciting.  Every day presents new challenges to overcome and that is one of my favorite aspects of CIMBA. 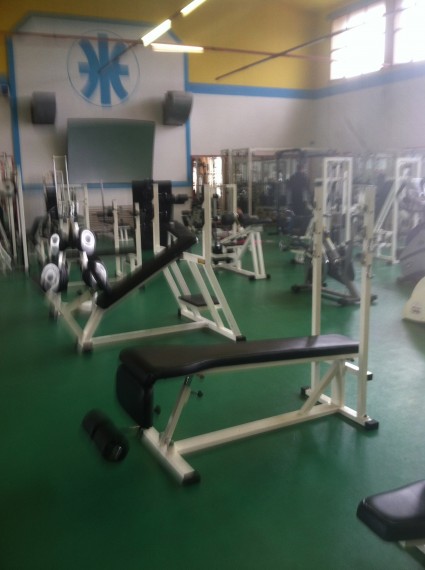 The campus gym we share with the local inhabitants 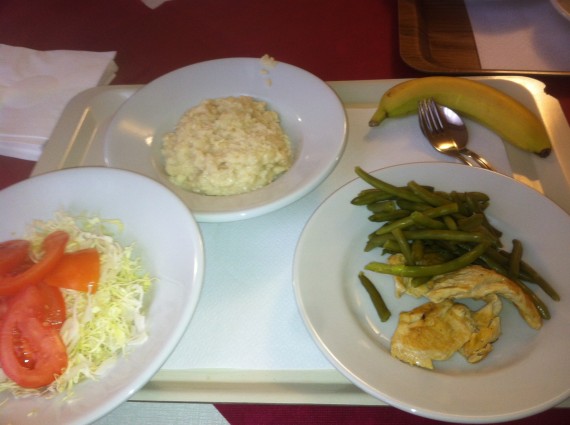 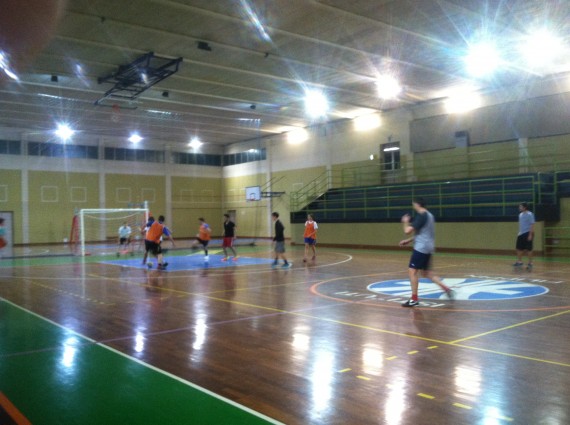 Thursday night soccer with CIMBA students and local Italians at the sports complex!

Whew that was a lot to write!  Now I am going to discuss my great experience at “Add a Seat to the Table”.  “Add a Seat to the Table” allows CIMBA students to experience dinner with a local Italian family.  This is the family of an Italian student who attends Istituti Filippin (the high school with whom CIMBA shares its campus) and the student speaks some English.  I was fortunate to experience a dinner with the Boldrin family this past Friday night at their house in a nearby town.  The night began at 7:00pm when I met Martina Boldrin and her friend, Letizia, both of whom are students, outside the front doors.  They greeted me with warm smiles on their faces and gave me the traditional Italian cheek kisses.  I gave them some small pastries I bought earlier that day because I learned that it is a sign of respect to bring a small souvenir or pastry when an Italian family invites you to their house for dinner.

After a 30 minute car ride of nonstop curious questioning by both myself and the girls, we arrived at Martina’s house. It was a beautiful stone building inside a gated wall (as many of the homes are here) with an earthly feel.  Her parents spoke little English, but were very welcoming and immediately made me feel at home.  It was their second time hosting a CIMBA student and they were excited to have me as a guest.  After taking my coat, they had us all sit down at the dinner table.  Along with prosciutto and Italian salamis, her mom baked a local Italian salad pie for an appetizer, that, contrary to the name, was delizioso!  They also served Insalata di Radicchio di Treviso, a typical vegetable salad of the Treviso region.  The father made sure I was not shy to take a second serving and I graciously complied.  After the appetizers, her mother placed a dumpling soup in front of us.  The dumplings were filled with a rich ricotta cheese and I can still recall the rich taste in my mouth.  A thought came to my mind to ask if they knew Frank Sinatra or Dean Martin as they are prominent Italian-American singers.  To answer my question, Mr. Boldrin popped a Frank Sinatra CD into the stereo and began singing along to a song!  Keep in mind he was singing along to a song in a language he did not know!  Martina commented that her dad loves to sing in front of her guests to make her feel embarrassed, but I assured her that I was enjoying the entertainment.  It also made me feel even more comfortable and opened up new topics of conversation.

Following soup, which was served in place of pasta as the first dish, we had the second dish and contorni: the Italian term for vegetables.  This is where it becomes a truly memorable meal.  The second dish, which consisted of chicken, was not just any chicken.  No, instead it was a chicken from the chicken coop in their yard!  Talk about fresh food!  The mother baked the chicken meat to perfection in its natural juices and served her “famous” (according to Martina and Letizia) carrots as a side.  By now, I had begun to feel “pregnant” (as Martina called it), because I was stuffed from eating so much!  However, dessert had yet to be served!  To prepare for dessert Mr. Boldrin opened a bottle of Friuli-Venezia Giulia wine and poured everyone a glass.  Friuli-Venezia Giulia is the most north-eastern region of Italy and it is known for its white wines.  It had a unique taste that was sweet, but not the same taste as Prosecco and not overly fruity.  I was very much a fan.  For dessert, we had two types of sweets that are common during Il Carnevale: Chiacchiere al forno and Castagnole.  The Chiacchiere were similar to fried dough with powdered sugar and the Castagnole reminded me of cream puffs.  Both were delicious.

After dinner, the girls and I played foosball in the basement and they told me about their daily life and we exchanged songs we liked.  We shared many similar tastes in music as I discovered American music is popular in Italy.  Finally, it was time to end the night and Mr. Boldrin drove me back to campus.  The whole experience was extraordinary and I recommend anyone studying abroad with CIMBA in the future to participate in this event.  Unfortunately, I became so caught up in the evening that I forgot to take a picture with the family!  Sorry! Please enjoy these pictures of the desserts instead. 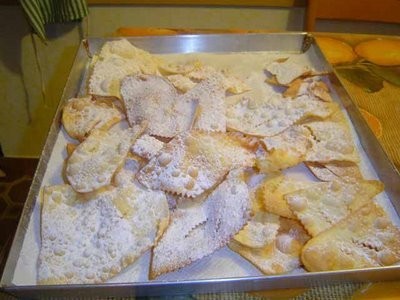 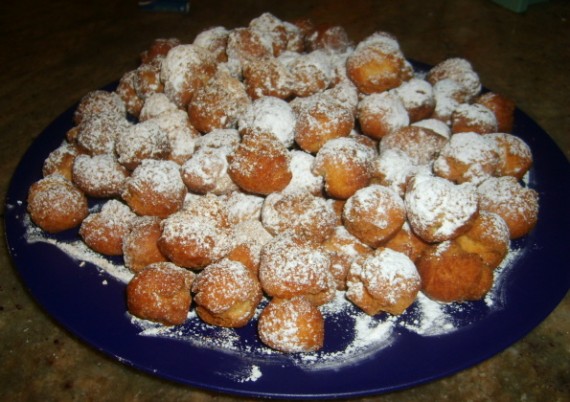 This weekend we took it easy and checked out the nearby Crespano market.  Wednesday night begins the first travel weekend so there is a lot of work to do before that time. My group is traveling to Paris and Barcelona so anticipate another exciting blog post next week!  Arrivederci per adesso!