“USA! USA! USA!” It felt as if I was in the middle of a World Cup match.  The Italian vs. American friendly soccer match was one of the most exciting events I have attended and it showed that even after a week-long excursion traveling across Europe, CIMBA finds a way to make a regular week back at school exciting and fun.  This past week perhaps may be the most memorable.  I completed my LEAP journey, passionately cheered for my classmates in the USA vs. Italy soccer match, and had an unforgettable final weekend hiking the coast in Cinque Terre.

As I have blogged about in the past, many students at CIMBA take the opportunity to participate in the LEAP leadership development program.  I am one of those students and it has been the most fulfilling self-empowerment program.  During LEAP, we attended lectures focusing on the neuroscience of leadership and have had meetings with a coach to discover our self-limiting barriers and devise methods to overcome these barriers.  I had my final meeting with my coach Maria, and seeing how far I had come in the span of 10 weeks was unbelievable.  Not to delve too much into it, but my barrier involved not being content with the choices I made. I always thought of the alternatives or feared that I had missed out.  By using mindfulness, quantified self-tests, cutting-edge neuroscience phone apps (search “My Brain Solutions” to find a few on the Iphone), I am much happier now with my decision-making process and do not always dread missing out.

I included this personal bit because I feel that many of my readers have also been afraid of missing out at some point in their lives (especially if they are in college!).  LEAP itself is not a “magic formula” to overcome self-barriers, it required much effort and challenging myself, but I can confidently say that the effort I put into it was magnified in my results.  Also, at the end of the LEAP journey my coach told me of the importance of rewarding myself for my accomplishment.  It had to be memorable so whenever I thought of it I would be reminded of my accomplishment.  I was not familiar with choosing a meaningful reward for myself and had a hard time thinking one. Then it hit me.  I had always been afraid of heights….so for my reward I am going paragliding on Mt. Grappa this week!  Stay tuned for the outcome of that experience in my next post.

Now onto, what was in my opinion, the highlight of the semester: the USA vs. Italy soccer match.  Every semester, CIMBA students volunteer to play a soccer match against the local Italian students.  This year was no exception and, with the support of almost every CIMBA student behind them, our team came back from a 0-1 deficit to win 3-1!  I want to give a shout out to Ryan who scored a hat trick!  The high energy atmosphere at the game was incredible.  Our Italian professor was rooting for Team USA  while playing his bongo drums and we were all chanting as if we were at a World Cup match.  The Italian supporters met our passion with their own enthusiasm to cheer on their team and they were using makeshift drums to complement their game chants.  One of the coolest aspects of the match was that the much of the CIMBA staff and professors made an appearance as well.  The professors and staff at CIMBA have been some of the most insightful and engaging professionals I have encountered and it was shown in their willingness to attend the game and hangout with us.  The post-game celebration at the sports complex afterward capped off the lively evening and also acted as an awesome fiesta to culminate the outstanding semester. 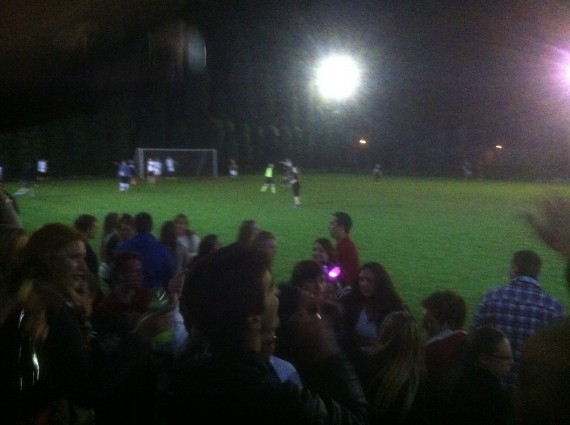 Sideline view of the USA vs Italy soccer match! 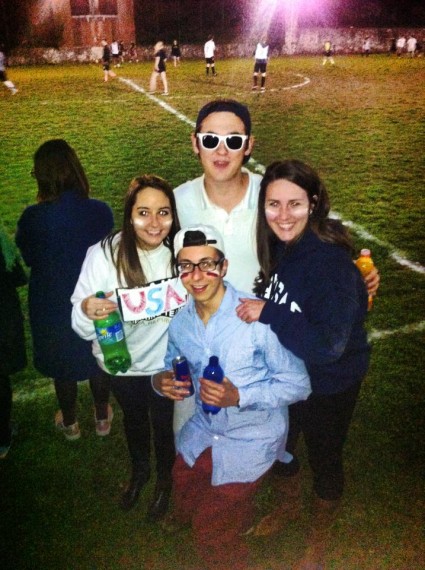 We made sure to show our American pride at the soccer match!

It was not the greatest feeling waking up for an 8:30am class the following morning, but the professor was understanding and took it easy on us.  After the exciting night before, I was more than ready to have a relaxing weekend in Cinque Terre.  We boarded our bus at 5:15pm and prepared for the 5 hour bus ride to La Spezia where we hopped on a 10-minute train ride into the village of Monterosso. Monterosso al Mare (as it is officially named) is the northern-most village of the five and it is also the largest of the five.  Although we arrived late at night Friday, a few of us ventured out to explore the city and found one cafe that was still open.  We met a group of very nice Italians and they told us the best place to purchase focaccia (a delicious flat-oven baked Italian bread) and told us where to find the path to hike to Vernazza, the next town south of Monterosso.  My friend, Seamus, and I enjoyed gelato for breakfast (only in Italy!) and a group of us decided to do the 2 hour hike along the coast to Vernazza.  Along the way, we passed a local farmer who was selling freshly made Limoncello and Wine.  We gladly purchased a bottle of each and were overwhelmed by the delicious fresh flavor.  I challenge anyone to find a place to taste a fresher, more delicious Limoncello or local wine!  I do not think it is possible!

The trek involved quite a lot of uphill travel and just as we were tiring we saw the serene village of Vernazza appear through a patch in the trees!  It appeared as if right off a postcard with the multi-colored buildings staggering on top of each other from the ocean and up the cliff slope.  Pictures cannot do justice to the beauty.  As a group, we decided to reward ourselves with more gelato (for some of us it was the second that day!), explore the town, and relax on the beach.  The villages are very small so exploring did not take very long and after being satisfied with our rest on the beach we headed back to Monterosso.  Only three of us (Seamus, Zac, and myself) decided to hike back to Monterosso as the others were exhausted with the initial hike.  Once back in Monterosso, we went to chill on the beautiful beach and met up with the other CIMBA group that had to book a hostel in the neighboring town of Levanto.  We had a great time hanging on the beach and testing our nerves in the frigid water.  Once thing I want to add is the clarity and rich blue color of the ocean.  We could see the bottom almost 100ft down! As we were leaving the beach to prepare for dinner, Seamus and I ran into another group of UD students who are studying abroad in Florence.  In fact, this was the same group of UD students whom we met in the Paris airport during our first travel weekend (I wrote about that experience in my blog post that week as well).  Small world! Unfortunately, they were staying in a different village so we could not meet up with them later that evening. A few of us from CIMBA did decide to treat ourselves to a nice fish dinner and we were more than happy with the savory seafood delight!  It is a must if you are in Cinque Terre to give the fresh fish a taste a least once!  After dinner, practically every CIMBA student staying in Monterosso came out to celebrate the birthday of one of the girls on the trip which was a blast! 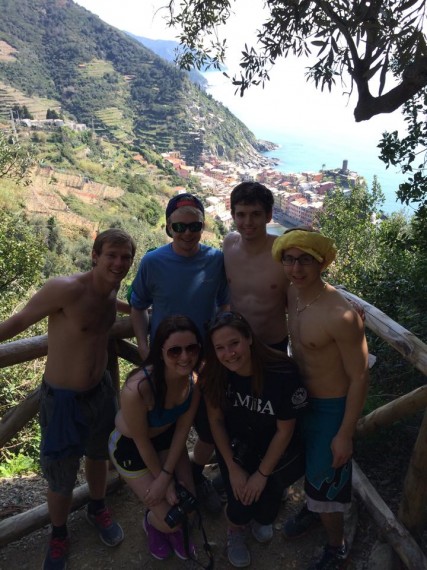 Our hiking group with Vernazza in the background! Perhaps yellow turbans are not my greatest look… 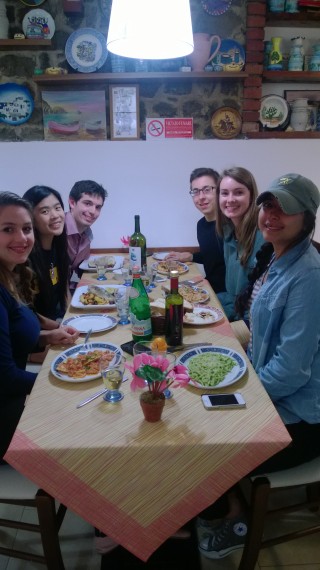 In the morning, we ran into our Italian friends again (even though it is the biggest of the five, Monterosso is still a small village!)  and I had a focaccia with pesto.  Pesto is another famous Cinque Terre delicacy and I can attest to this as the pesto on the focaccia was unrivaled by the pesto dishes I have had in the Veneto region!  Given that our bus was departing from La Spezia at 5:15pm, we had a short day to fit in as much as possible. Three of us (Seamus, Zac, and myself again) took a train down to the southern most village of Riomaggiore.  From there, we took a hike along the coastline and found/saw some pretty cool sights. Seamus had said how he wanted to go cliff-jumping and we had heard that there was a good cliff-jumping location in the village of Manarola so we headed there after our hike.  One thing I noticed about each village was that they all possessed the multi-colored houses and beautiful coastlines.  The major difference with Monterosso is that it has the largest beach and is open later than 9:00pm!

Anyway, back to the story ….. we found a location that looked promising for cliff-jumping.  Seamus had seen people jumping from the spot on Youtube so we knew it was safe.  However, we both were surprised by the height.  We had to be at least sixty feet from the water below!  Although somewhat frightened, he promised that he would jump and prepared to do so.  To me, and I’m sure many of the passerby, it looked as if he was about to commit suicide and his friends were cheering him on.  Not going to lie, I thought he WAS about to commit suicide given the height of the cliff.  Still, he jumped (it is too bad it is not possible to put the video in my blog!) and it made for an awesome story.  I was going to jump as well, and made it as far out as the steep ledge,  but without the ability to see well (I had my glasses and not contacts) as well as my fear of heights, I was not able to work up the courage to do it.  Afterwards, even though I did not jump, I still needed to purchase a kebab (my comfort food of choice while traveling) to calm my nerves!  Hope you enjoy the picture that Zac snapped of Seamus and I looking down at the immense fall below! 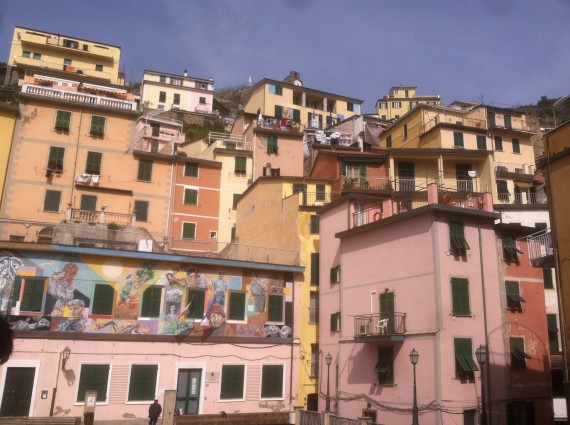 The Village of Manarola! 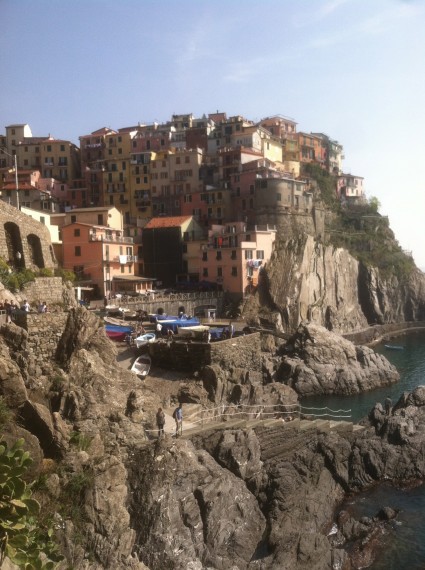 The village of Riomaggiore! 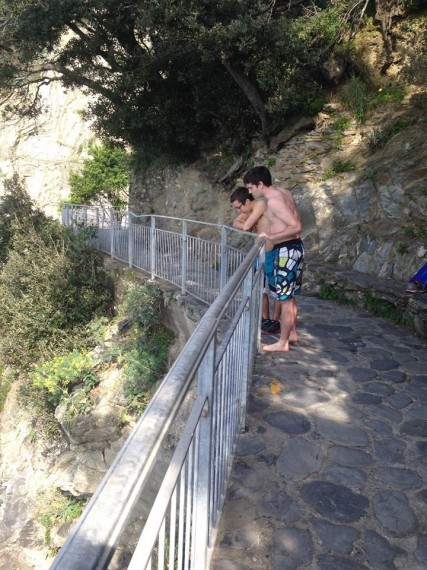 Seamus and I assessing the cliff jumping location

And just like that, the final weekend at CIMBA has come to an end.  It has been a surreal experience thus far and I am convinced that when I arrive home it will feel like a 3-month long dream.  But, there is still much fun in this upcoming week.  We have the formal dinner on Tuesday night and I have my paragliding trip to look forward to.  I hope you enjoyed my last blog post from Italy… my next blog I post will be from my home in America!  Talk to you then!