Although I am studying abroad in the wonderful country of Italy, I came to the realization that I have been focusing a lot of my travel time outside of Italy and haven’t planned as many trips in Italy that I would like. I love to travel to other countries but it is important to focus your time in the home country in which you are getting an education. There are so many interesting regions to explore and I know Italy has some of the most beautiful cities in the entire world, therefore I was very excited to be visiting Florence, Italy this past weekend. I have worked at an Italian restaurant for the past four years, and they told me to not step foot back in their doors unless I went to Florence. They previously informed me that it was one of the prettiest places Italy has to offer, and I would have to agree.

First of all, I would recommend taking a bus with a ton of students because it makes the trip a lot more fun. You can explore and enjoy the city and hear everyones different experiences on the way home. We boarded the bus about 5 pm on Friday, the typical time of departure for most students. Our bus was coordinated by a student named Joey and she was great with communicating weeks in advance ( it was a very good deal). All of us were excited but knew we had a long weekend ahead of us, so some slept or worked on some homework so we could make the most out of our weekend. It was about a four hour drive and it flew by in my opinion compared to last weeks’ 7+ hour ride to Switzerland.

Upon arrival, about 50 Cimba students filed off the bus and took a train to our Hostel. As we were all checking in, eager to see the town at night, my friends and I realized our names weren’t on the list. One of my friends accidentally booked the hotel next door and we had a deluxe room. It wasn’t that much more expensive, but it was a really nice hotel and it was decorated very nicely and made it feel like were being pampered in Florence. 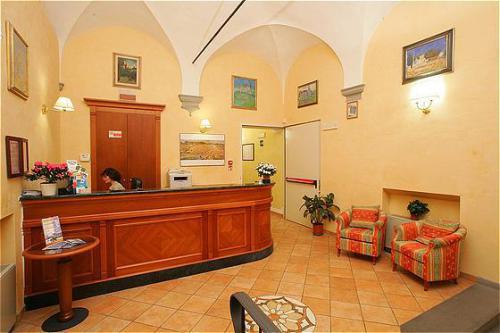 All 50 of us then went to a huge late night dinner coordinated by Jake Thomas. It was actually amazing food for only 13 Euro. You received bruschetta, salami, cheese, steak, potatoes, salad, free wine, and FREE ….WATER!  (That’s one of the things I miss the most) It was a family style dinner and we were all served very nicely, and ended with a nice espresso before we went out that night. The restaurant was called The Clubhouse Firenze. 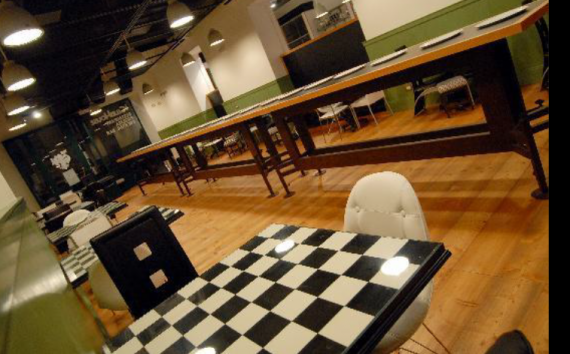 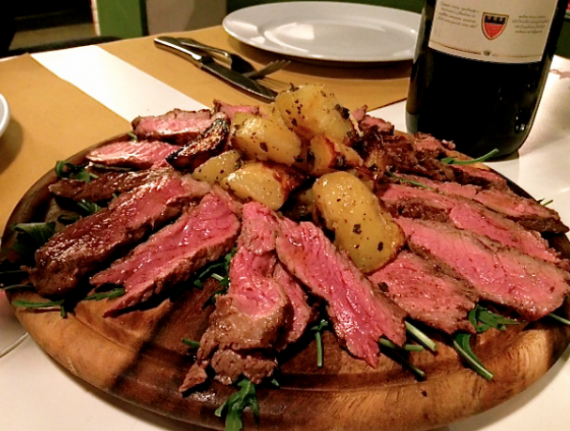 We all travelled in huge groups walking around the vacant streets full of amazing architecture and went to some different places to have some fun. 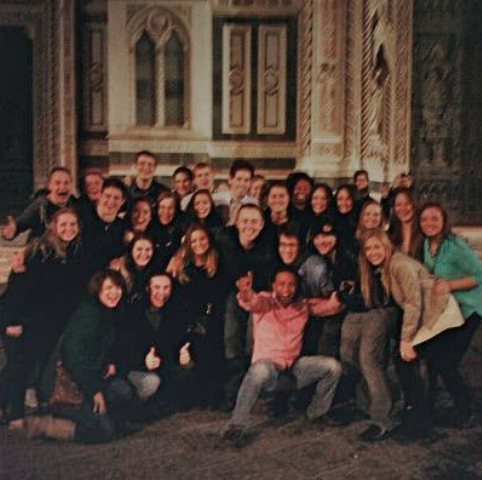 The next morning, my friends and I woke up and started our day of sightseeing and exploring the city in the daylight. Fortunately, our hostel was close to a lot of different beautiful buildings. The Basilica di Santa Maria del Fiore is the main church of Florence, Italy. The Duomo as it is ordinarily called, was begun in 1296 in the Gothic style to the design of Arnolfo di Cambio and completed structurally in 1436 with the dome engineered by Filippo Brunelleschi. The exterior of the basilica is faced with polychrome marble panels in various shades of green and pink bordered by white stone 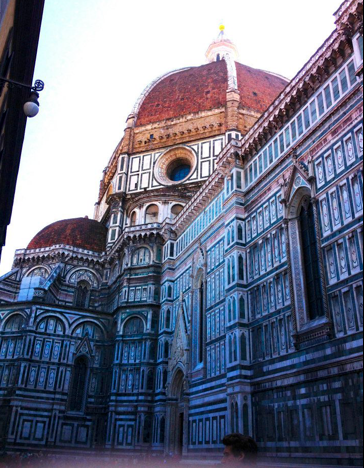 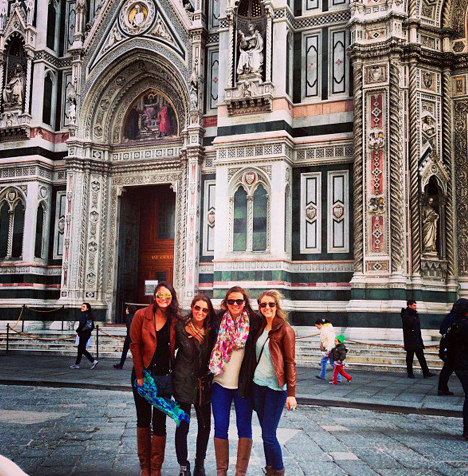 We walked past it at night but during the day, it is even more breath-taking. The colors and shapes were just two of the many things that made it so unique.

Later, we went to a museum to see the David is a masterpiece of Renaissance sculpture created between 1501 and 1504, by the Italian artist Michelangelo. The statue represents the Biblical hero David, a favored subject in the art of Florence. Because of the nature of the hero that it represented, it soon came to symbolize the defence of civil liberties embodied in the Florence Republic. There are replicas around Florence but it was awesome to see the real deal. It is way bigger than it looks and was very detailed. 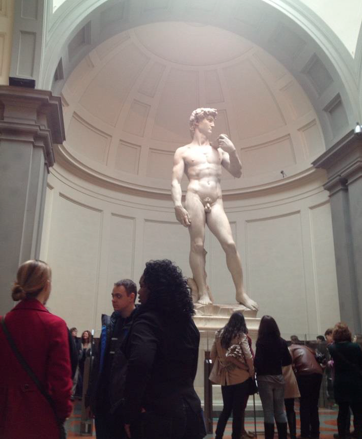 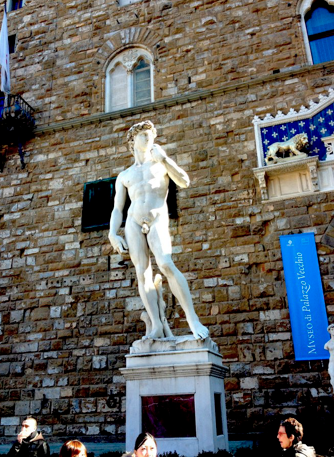 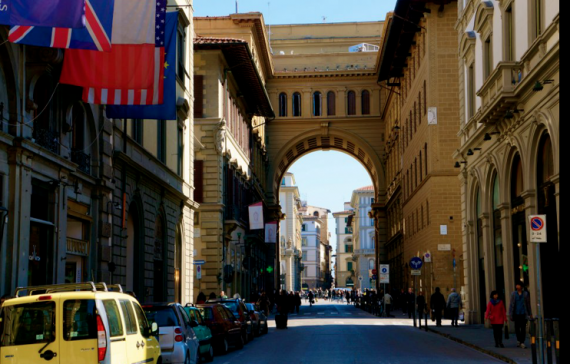 Later on that night, we did other activities around the city and enjoyed the wonderful nightlife that Florence has to offer. 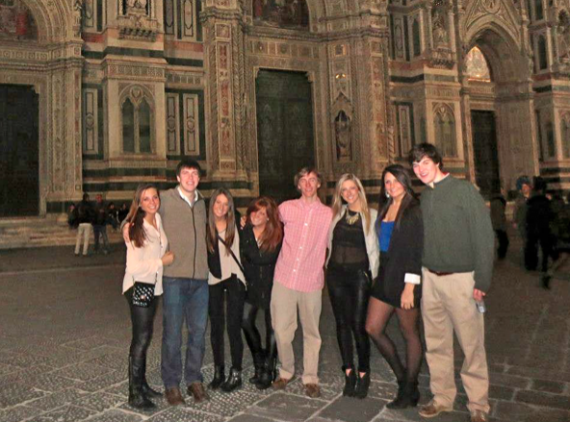 The next day, we went on a walking tour around the city as well as stopped in many shops and people performing up and down the streets. One of the things I thought was cool was all the different paintings and artwork that artists were doing. I passed by a man that actually was drawing right on the street with chalk. As I stood and gazed, we made awkwardly long eye contact so I felt obligated to tip him in his little jar. I dropped what I thought was a 50 cent Euro coin was actually…a 2 Euro coin and a 50 cent Euro coin. I told myself I did a good deed and he needed it more than me, plus if you paid me 100 Euro, I still couldn’t paint this masterpiece. 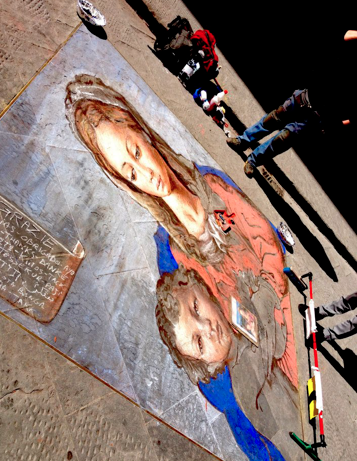 There were markets up and down the street flourished with purses, leather belts, wallets, sunglasses, and many other goods. It was such a cool experience to see all the handmade crafts that were actually made in Florence. They are one of the leather capitals of the world and are famous for their fur. I tried on a coat that was made out of basically a full bodied white fox. I asked how much it was as a joke and said, “So like 200 Euro?” and he told me that would only buy one sleeve, so after some long hesitation, I decided maybe another time. 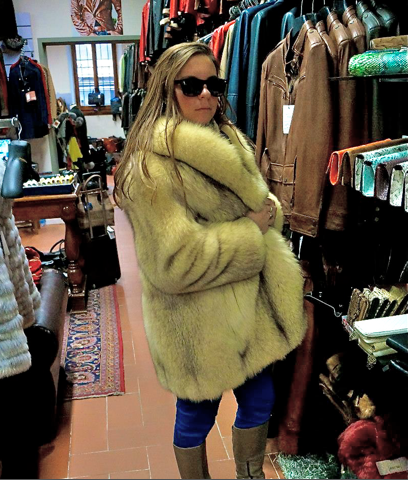 Later in the day, we only had a few hours left so we wanted to travel to the Arno River and see the scenery over there along with the famous “Ponte vecchio” (arch) and the Santa Trìnita bridge. It was 71 degrees and I couldn’t of been happier to not be wearing a coat. 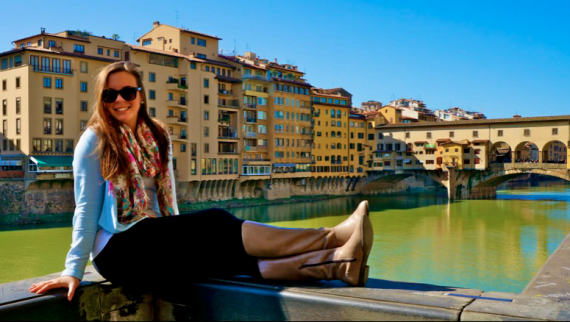 To finish up our wonderful experience, we sat down in an outdoor restaurant soaking up some fresh vitamin D and enjoyed some lasagna and salad. We all agreed it was probably almost as good as our mom’s back home, so hopefully she doesn’t read this and be offended. The service was superb and we felt like we weren’t tourists for once, but just a group of girls having lunch in the middle of the Piazza del Duomo (which was otherwise known as “Catherdral Square.” 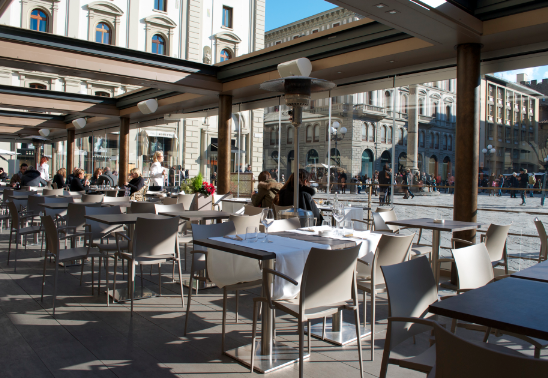 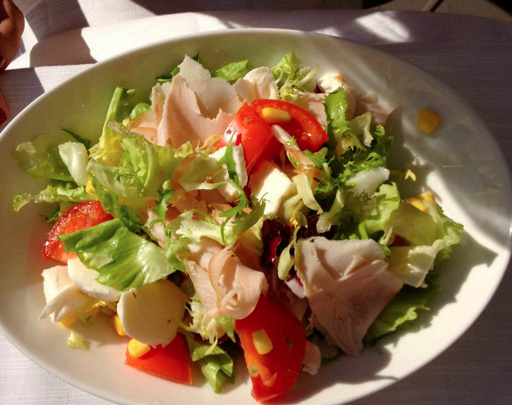 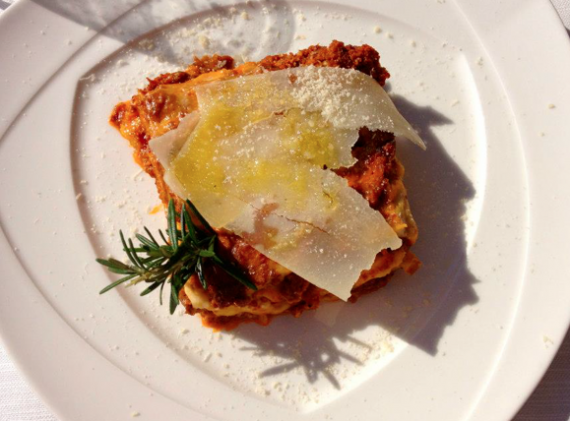 As we boarded the bus, I knew it was a great trip and wish I could have stayed one more day. I definitely will go back here in my lifetime again, I want to spend more time shopping and seeing more of the history. I am pleased with what I did in two shorts days but I know there is much more to see. Next up, my ten day break consisting of visiting the cities of Brussels, Budapest, and Barcelona (let’s hear it for the letter B!) and also 24 hours in good ole’ Paris. 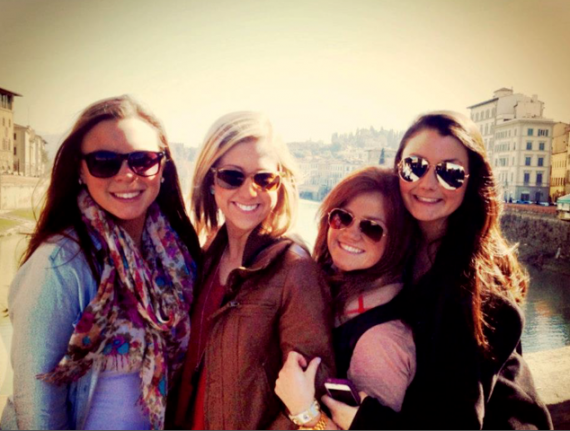