Sisterhood of the Traveling Cimbans

Cab to Venice airport, flight to Rome, flight from Rome to Athens, train from the airport to our hostel, ferry from Athens to Santorini, car from port to hostel. This weekend was quite the travel weekend! It was Greece, so also prepare yourself for a multitude of references to about two movies. 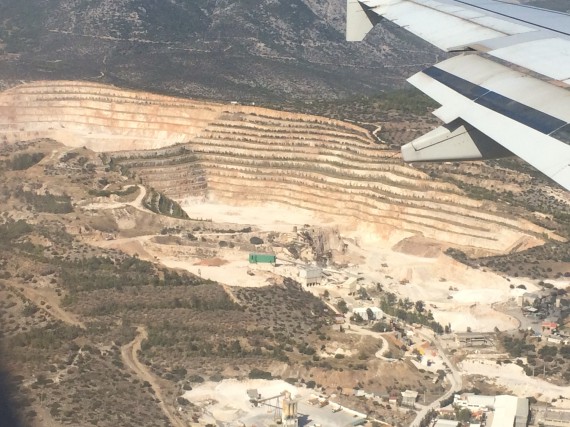 Athens was our first true destination. So this counts as my third country I’ve ever visited! Crazy, and let me tell you prices are so much nicer in Europe for this sort of traveling. Athens was…not what I expected. I guess this is the new normal for historical cities, but across the streets from ruins you will see  graffiti on office buildings. It was neat in an urban city sort of way- but definitely different from what I thought. I was just expected a lot of old. Is that bad? I know I can’t be the only one thinking that. Athens was very touristy too. Greece however probably had the friendliest locals I’d ever encountered.

Four friends and I stayed in a hostel right in the center of the city. As soon as we got off the train to head to our hostel we B-lined to a Gyro place. I had no idea how truly delicious these things were. They have French fries in them!! Also they are pronounced as if there were no G but an E or was it like EAR-ROW. 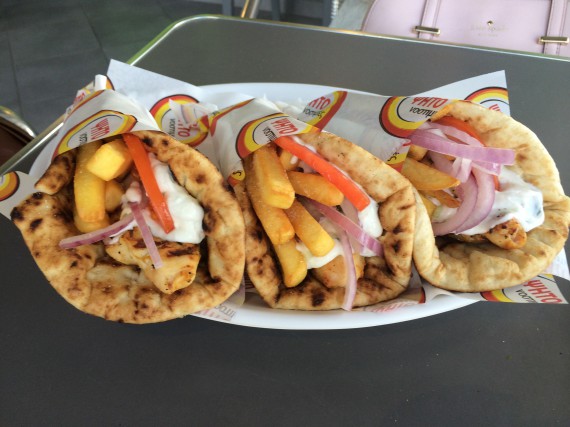 I could not tell you what the correct way to say it was, but it does not sound like the way it’s spelled. Also, just about everyone speaks English there which is so convenient especially considering the look of the Greek alphabet. Just from an objective standpoint, how do you think this is supposed to be pronounced?

Want to know what it means?

I think I proved my point. Some of the ruins we visited include the Parthenon, the Panathenaic Stadium, and the Acropolis. The Panathenaic Stadium was amazing. Just to be able to walk where Olympians stood was unbelievable. They actually provided an audio tour at the stadium which took you through the history of the structure and the Olympic games. We were able to walk into the room were the Olympic Torches were kept. Yes. This is true. It gave me the chills. 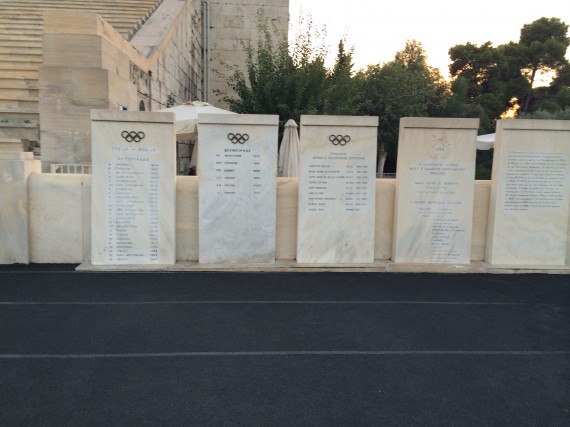 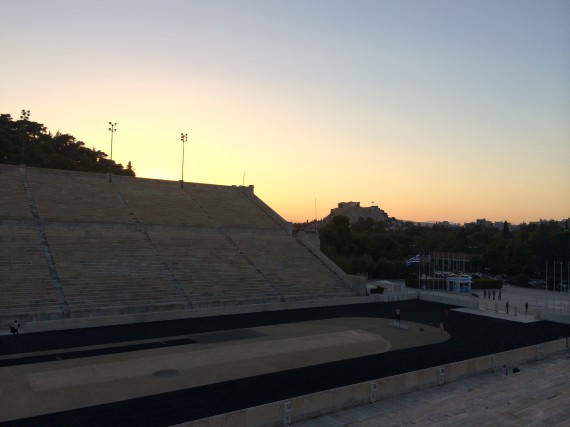 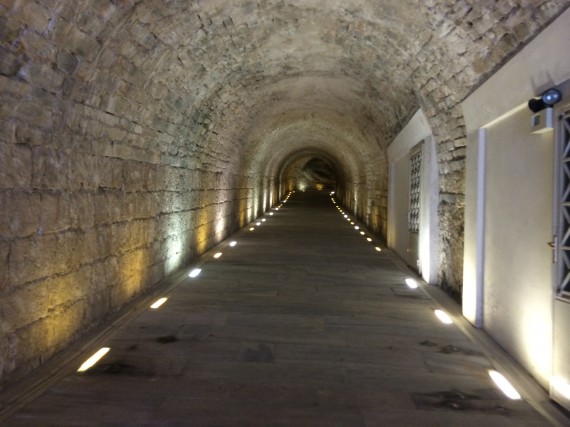 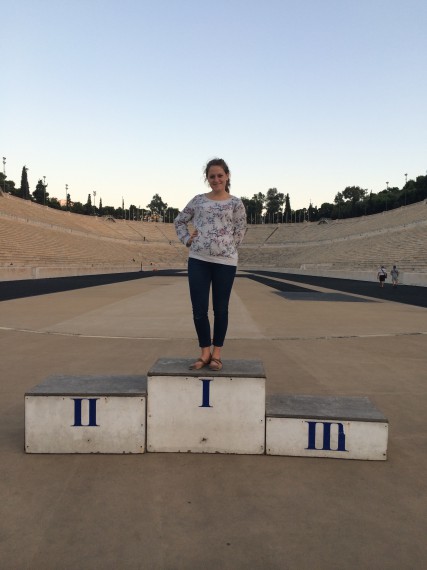 After a long day of walking and experiencing more gyros, history, and baklava it was time for the most uncomfortable travel in my entire life.

I’ll explain. So we were suggested by a friend to take a ferry from Athens to Santorini. Our ferry there was 6 hours and on the way back was 8. Seemed strange, but we decided we would figure it out when we got there. The prices weren’t bad and we’d never traveled by ferry before- so why not, right?

After arriving at the port in Athens we waited an hour to load on the peculiarly small ferry. Better early than late, it wasn’t too bad. We sat in our seats and Surbhi, one of the four friends, and I figured we would buy some coffee at the little café located in the center of the ferry. We ordered wonderful cups of warm coffee with just the right amount of milk and sugar. She and I sat and drank as we anticipated finishing some work on the way to Santorini. Seats filled and before we knew it- we were off!

We were off, up, down, side to side. Nausea isn’t even fit to describe what every single person was feeling on this ferry- this 6 hour ferry that began with passengers running to trash bins, and locking themselves up in the bathroom. The crew was handing out those wonderful paper bags for motion sickness like flyers on the streets of a big city. All five of us immediately closed our books and tested every possible way not to throw-up. Not only could we hear the sickness of others- but let me remind you that the ferry was small. That’s all I have to say about that. SO here’s the trick- listen to music very loudly, close your eyes, and force yourself to daydream about anything else but a boat on the ocean for 6 hours.

There’s also an alternative, check the reviews. As much as it kills me to say it, hindsight is 20/20.

Disregarding the way we got to Santorini, the island was breathtaking. We each stepped off the boat looking for a donkey to take us up the mountain. Ok, that’s not true. There were cars and buses but we were told that these roads were new. Our hostel host, who was an angel, picked us up personally and took us to our Greek Goddess Cave. That’s right. We stayed in a cave and this is normal there. 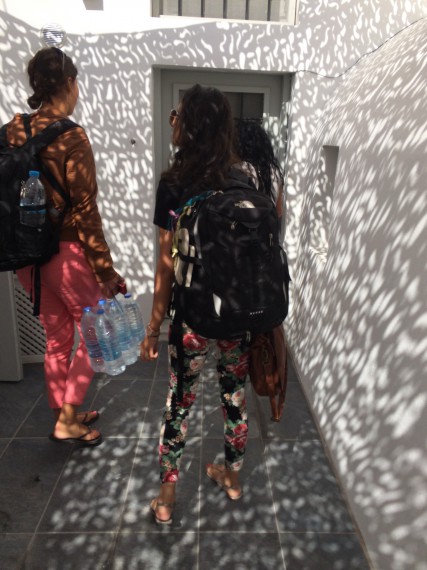 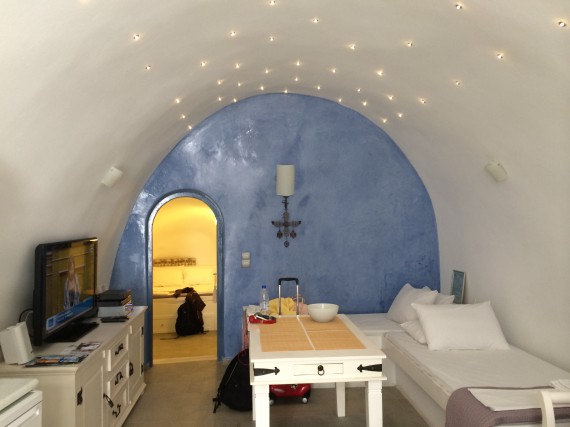 We were advised to spend at least one evening in Oia for the sunset. This is what I call a beautiful view. It reminds me of vacation commercial from home- but very different. The white buildings, blue roofs, and not to mention the number of brides we encountered. Not a bad wedding destination if you’re cool with numerous tourists photo-bombing all of your wedding pictures. After browsing various shops we sat down at a restaurant with the perfect view. Now just look at this picture and escape to paradise: 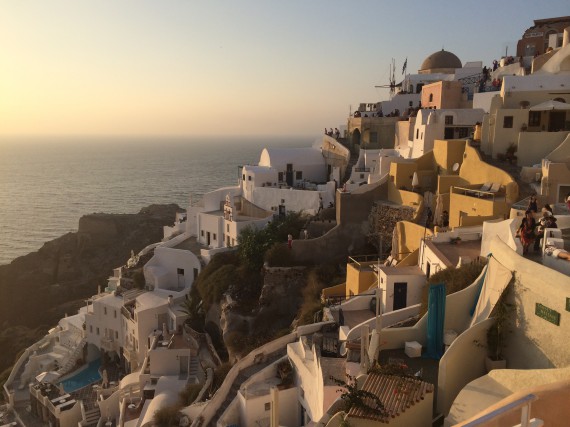 Our first night in Santorini was so fun and I think we all agreed that we should have planned this trip for a month…if that was possible.

Day 2: the beaches. So Santorini has three main beaches and from what I understood they are: red beach, black beach, and white beach. The beaches actually had this colored sand. The red beach was pretty unbelievable; the sand was essentially made out of pebbles colored from the volcanic ash. There are boats that take you from beach to beach. After exploring the red beach and tip-toeing in the cold water we moved on to a black beach. This beach was very similar except for one awesome feature – the cave. We swam with the help of our unofficial tour guide, whom we called Kostos, through the cave and it was absolutely terrifying but so worth it. We can now say we swam through a cave in Greece. Check. 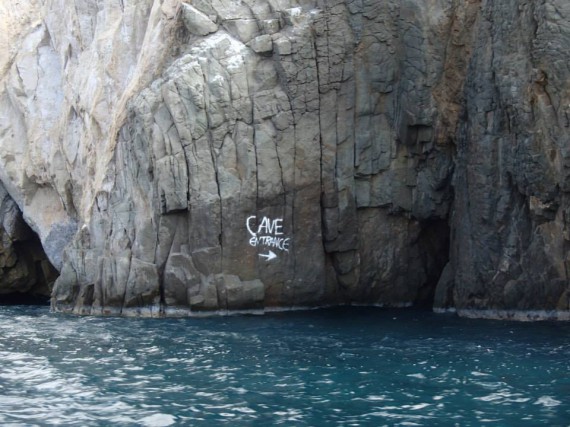 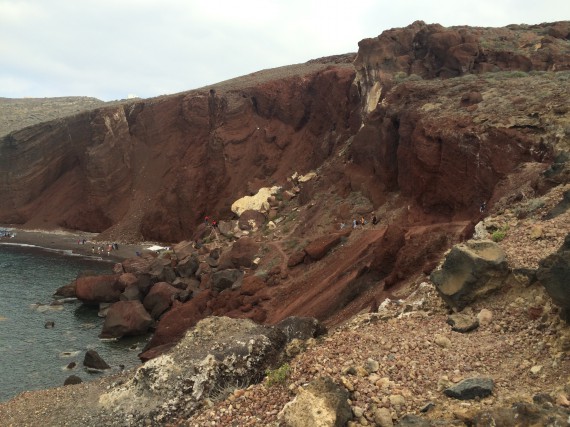 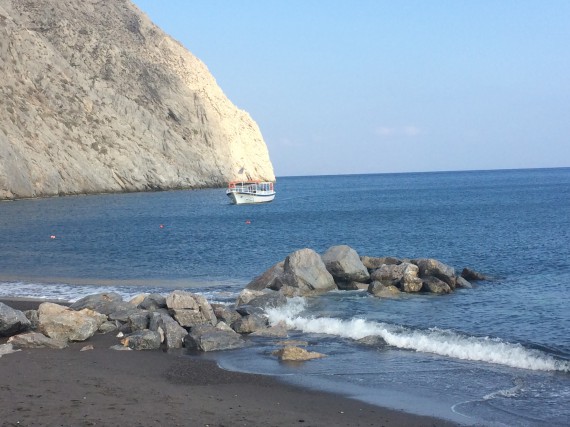 AND of course we needed to do that one last Greek tradition. Here’s a hint: OOPA!

That’s right; we smashed some plates after eating the last dinner. That night- we had lamb! The restaurant was family owned and provided us with some interesting entertainment. Food was delicious and the dancing was a blast. We said our mournful goodbyes to Santorini that morning. It was hard to leave, and we also had to trust that this ferry ride would be better. 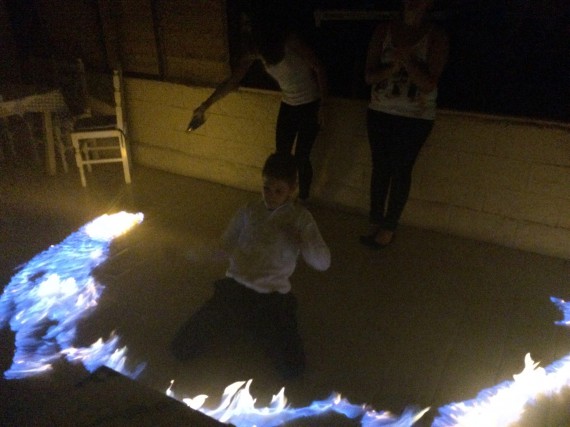 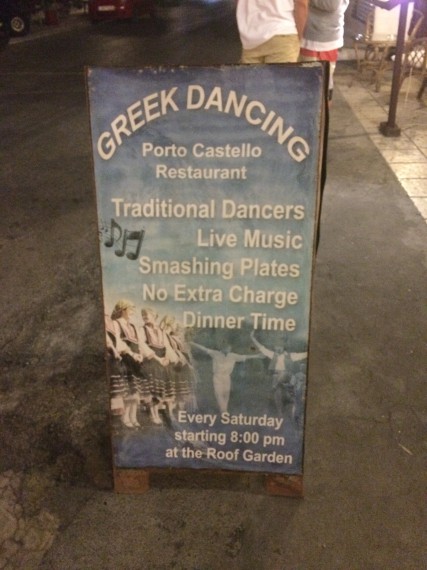 THANK GOODNESS IT WAS! For future travelers, there is a monumental difference from the 6 hour ferry and the 8 hour ferry. Also the view was beautiful, but be warned it’s pretty congested- pack a lunch because you won’t have a place to eat once you lose your seat. Back to Athens, to the airport in Rome, Rome to Venice, and cab from the airport to campus. This weekend took a lot out of each of use, but I know we’ll never forget it. A bond, maybe sort of like a sisterhood. For that weekend- we were Greek!

Disclosure: no jeans were shared during this trip