Interlaken: A Weekend In the Swiss Alps

The week in Paderno had been a long one. Three tests, a paper, and multiple group projects. By the time my third and final class rolled around on Friday, I could no longer focus on complex isoquant curves and production functions. No. At that point the only thing on my mind was the Swiss Alps and the thick white powder I would be weaving through in less than 24 hours.
The bus rolled onto campus at 5 pm and a group of 32 of us crammed ourselves in and prepared for the 7 hour trip. While the bus may not have been the most comfortable ride, there was little to complain about. Our bus trip there had been organized by Taylor Colby (one of the other students going) at a fraction of the price that any other mode of transportation would have cost us. Not only did it leave spending money in our pocket but the loud jam box stereo that played continually accompanied by horrible sing-a-long attempts made the trip fly by. I would definitely recommend looking into it if you are ever planning a weekend trip with a large group of people.
At around midnight the bus dropped us off at our hostel and we were in bed soon after. While most people on the trip hadn’t skied the Alps yet, one could say that a select few of us were “grizzled veterans” as we had just been in the Austrian Alps the week before. Having already gone through the process, we knew the importance of getting to the mountain as soon as possible to maximize our time skiing. The next morning we were up at the crack of dawn and ready to go. We took the train to Grindelwald, a town at the base of the Jungfrau mountain region, where we rented our equipment before we headed to the top. 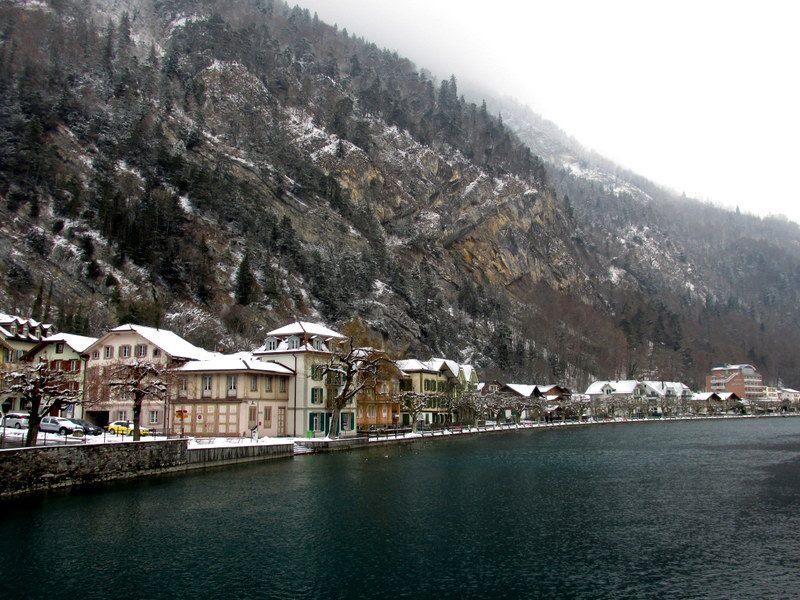 Home to some of the highest peaks in the Bernese Alps (some standing over 14,000 feet), Jungfrau is one of the most popular ski destinations in all of Europe. Part of the regions popularity is due to the extensive rail system that creates easy access to all parts of the mountain. The amazing train system is able to take full cars of passengers to stations located over 11,000 feet up the mountain. The train we boarded took us straight to the Klein Schleindigg Mountain. 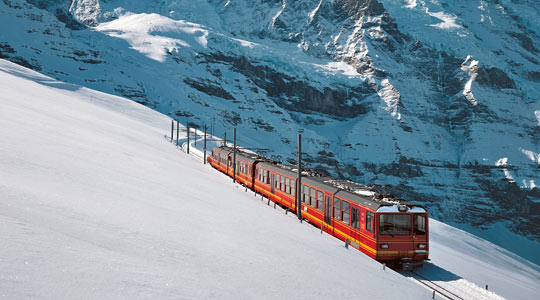 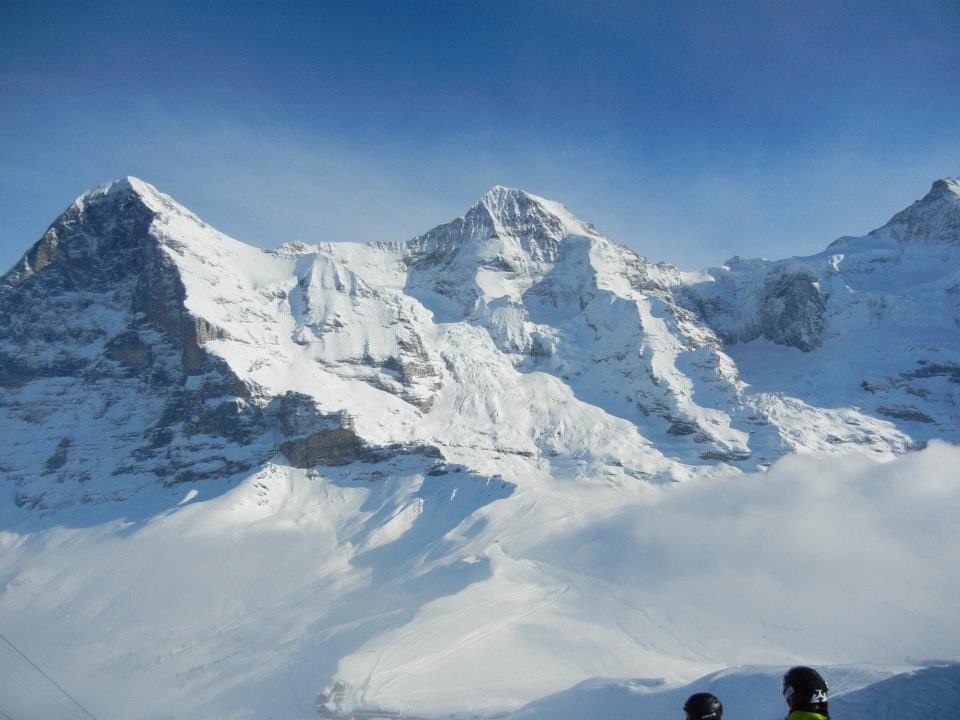 It might sound cliché, but there are really no pictures or words that can do justice to the views at the top of this mountain. While the mountains in Austria were similar in size, the peaks of the Jungfrau region seemed to all have massive rock faces where snow was unable to accumulate. The huge cliffs surrounded the entire skiable portion of the mountain and each time we got off a lift it was hard to not sit back and admire the views.

After snapping pictures at the top, we would shoot down the freshly snow covered runs that weaved back down the mountain. On some of the runs you would start with a clear sky above you, then after turning a corner halfway down the mountain you would find yourself in a cloud until you popped out seconds later where the sun was shining brightly again. While we stayed on the main runs for most of the day, we often veered off the path and cruised through thick untouched powder and trees all the way to the bottom.

Trying to make the most out of the day, I took the last lift to the top at 4:43 before the lifts shut down at 4:45. It was hard to stop myself from going down again but after 6 hours of snowboarding, my body was almost completely checked out. It was time to head back to the hostel, relax and explore the town of Interlaken.

That night we walked around the city bouncing around to different hostel bars, including “Funny Farm” and the famous “Ballmer’s Hostel”. Like always, we ended up meeting a lot of new people and making the most out of the night. The next morning we woke up and went “shopping” for the most “Swiss” items possible: watches and Swiss army knives. And when I say “shopping” I mean looking at these items and then leaving after seeing the prices. It’s no secret that Switzerland is a very expensive place. From the $80 lift ticket, to the $40 knives, to the $13 big macs at McDonalds, it seemed like everything in the city had jacked up prices. Being said, if you are planning on going to Switzerland, expect to bring extra cash because you are most certainly going to need it. 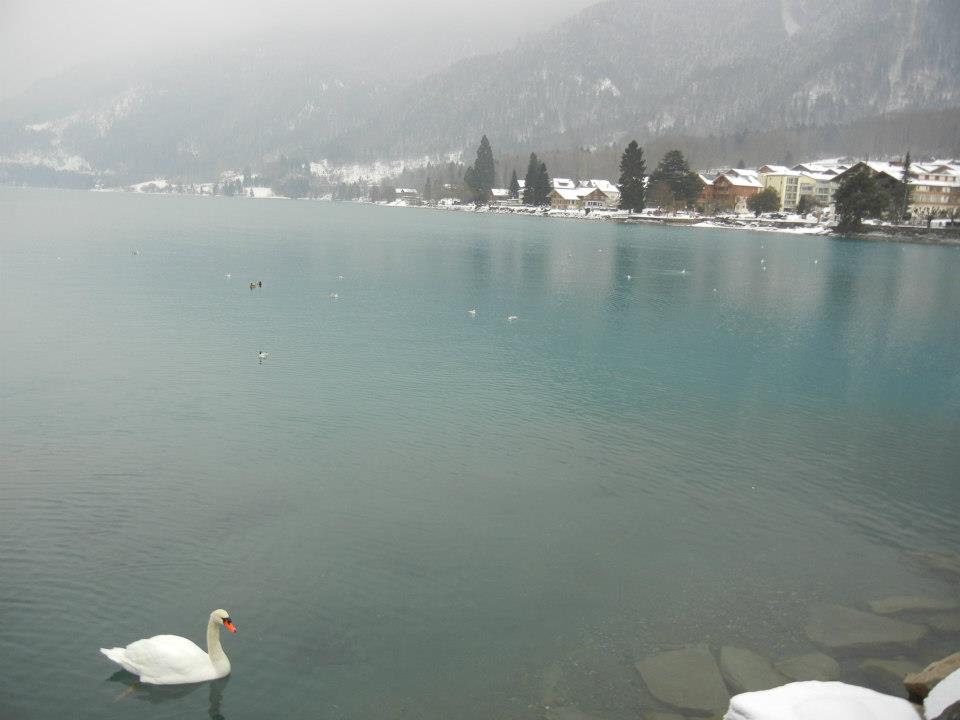 After grabbing lunch at an Irish pub we walked to Lake Brienz and enjoyed the great view. While most people take the bus to the lake, the walk wasn’t too far and you get to see a lot on the way. We were especially pleased with our decision to walk when we came across a couple of awesome midget donkeys that we played with for far too long. Later that day we made it to the top of a hotel near our hostel where everyone got hot chocolate at the sky bar that looked over the whole city. By 7:30, our time in Interlaken had come to an end and we piled on the bus for another 7 hour trip. 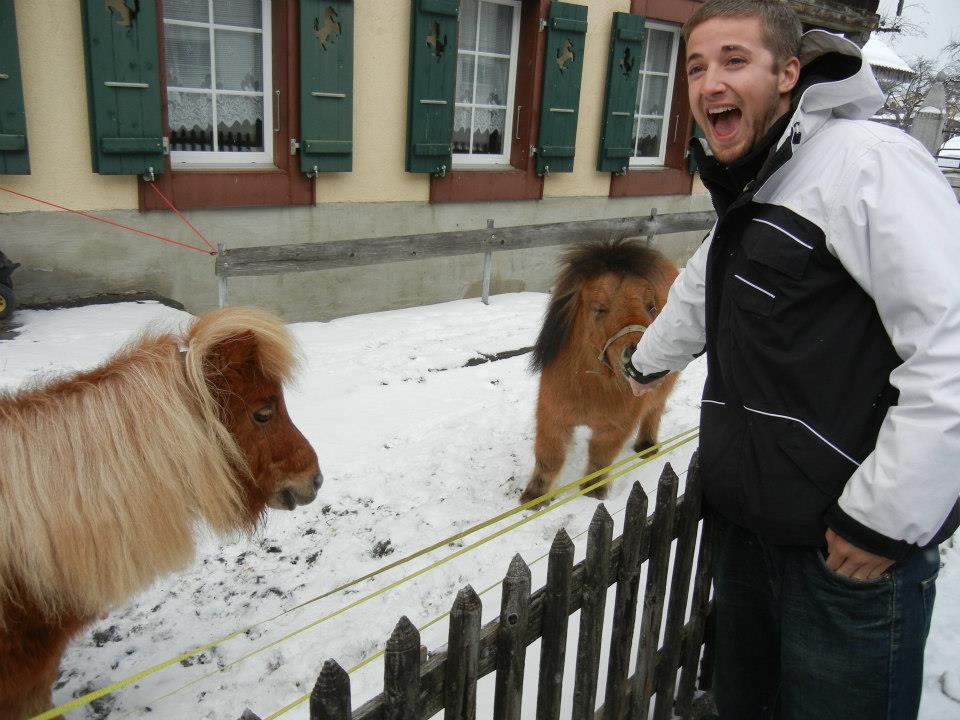 All in all, Interlaken and the Jungfrau mountains made for an amazing trip. It’s hard to believe that in the past two weeks I have snowboarded in some of the most well-known ski regions in the world, places that most people will never have the chance to go. If you ever have a chance to ski in the Jungfrau I would recommend it a hundred times over. It was a surreal experience that I will never forget.