A Bromantic Weekend in Rome

This past Sunday, an Easy Jet aircraft carrying six bros from Paderno Del Grappa landed in Venice. We had spent yet another weekend traveling to one of the most amazing places any of us had ever seen: the ancient city of Rome. While we have had trouble on past trips efficiently using our time to see as much of the city as possible, this problem was not an issue in Rome. By the end of the weekend I proudly crossed off all nine major attractions on the map we had used. We were able to make the absolute most of our time by exploring everything from the Coliseum on the far west part of the city to St. Peters Basilica and the Vatican on the far east.

.
We arrived at the Rome airport at around 11 pm on Friday night and began deliberating how to make it to our hostel. Immediately after stepping outside the airport we were approached by a sketchy cab driver who offered us the ridiculous price of 80 euro. After repeatedly refusing and bluffing to take the non-existent bus, he dropped the price down to 60 and we were finally off. This was a good lesson to learn before we got into the city. Never pay what street vendors or meterless taxi drivers first offer you; always bargain down. Once we got to our hostel we met up with my friends from Virginia Tech who had gotten there the night before. We hung out for a little bit and hit the sheets early to prepare for our longest day of site-seeing yet.

.
From past experiences, hostel breakfasts are not always something to look forward to. Rather, they are more of an obligation that you need to fulfill before starting your long day of traveling. This was not the case at our hostel, “The Yellow”. This place had a kitchen that cranked out delicious grilled, bacon, egg, and cheese sandwiches and hearty omelets with toast and hash browns all for around 4 euros. Not only did it have great meals but everything from the service, bar, and atmosphere was great. 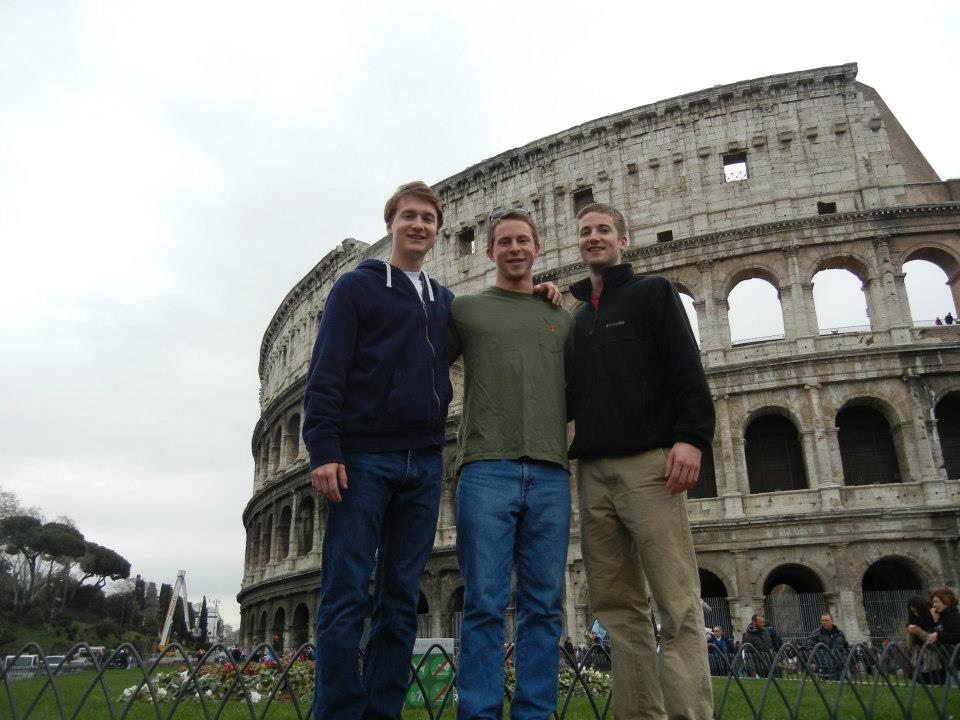 After starting off the day with huge omelets in our stomachs we hit the streets to see the amazing city. Our first stop was none other than the Coliseum. The place was packed with tourists and we opted to pay a couple extra dollars for a guided tour that also helped us avoid the ridiculous line. I have seen so many pictures of the massive amphitheater, so to finally be walking around inside was an awesome experience. Though it was often hard to hear over the swarms of Asian tourists, having the tour guide take us through and explain the history of events that took place in the Coliseum was a great benefit. 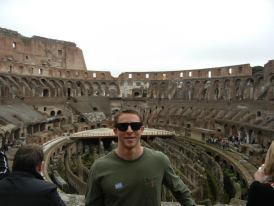 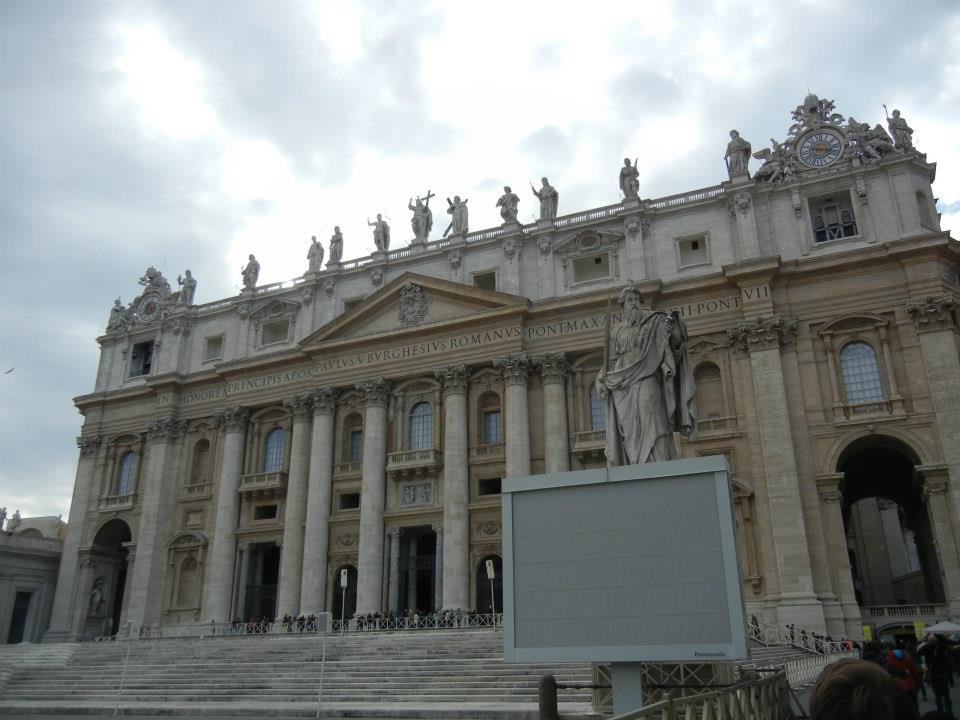 Unfortunately, daydreaming of being a gladiator had to come to an end as we were on our way to the Vatican. After walking about three miles we arrived in front of St. Peter’s Basilica. Given the publicity of the Pope’s announced resignation, we had to make our way past a huge tower of news stations in order to get in line to see the church. By far, the church was the most amazing building I have stepped foot in since arriving in Europe. The massive ceilings, brightly decorated with ornate paintings, and sculptures that lined the walls made it an unbelievable site to say the least. If you don’t think you’ll be able to make it inside the Basilica while in Rome, than I suggest you rethink you’re planning. 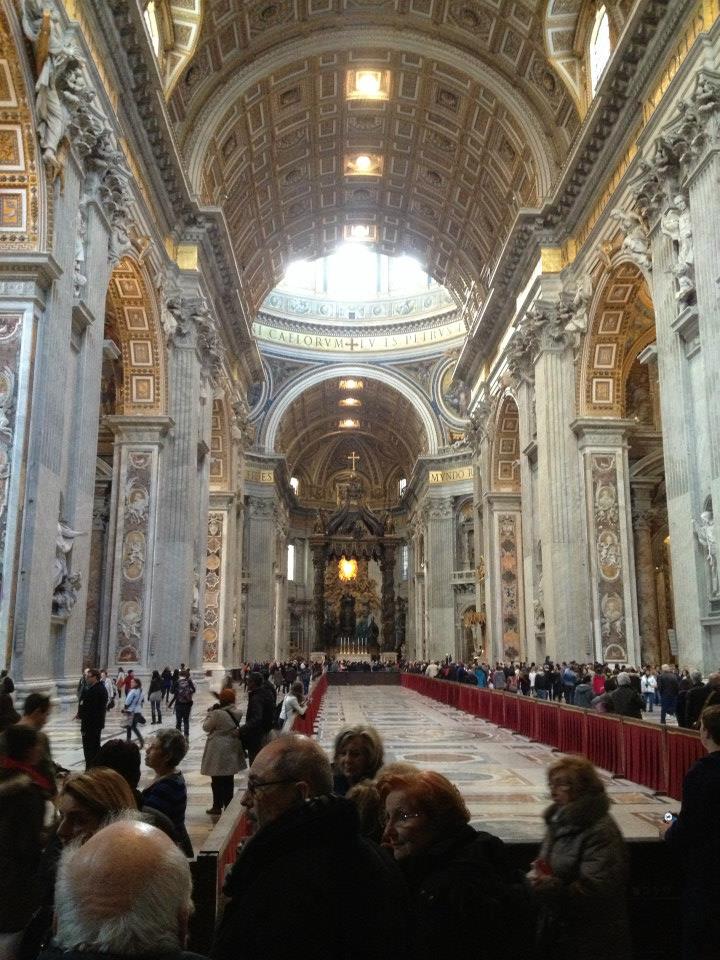 After leaving the Basilica at 4:50 we power walked to the Vatican Museum. If we were going to have any chance of seeing the Sistine Chapel and some of the most amazing sculptures and paintings the world had ever seen we had to get there by 5 pm before it closed. Luckily we got through the doors at 4:59 and were able to see the museum and all its glory. I could talk about the museum and how decorated every square inch of the building’s interior was for hours but I have like 10 other places to talk about. All I’ll say is that it is a must see if you are lucky enough to make it to this incredible city. 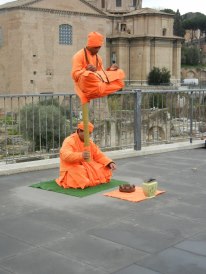 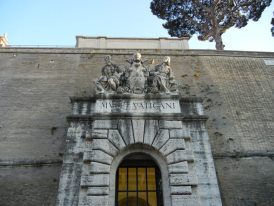 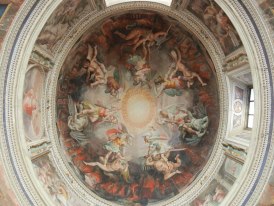 The long day finally came to an end. After leaving the museum we hopped on the metro and made it back to our hostel to get ready for dinner. The Virginia Tech girls, who we had been traveling with us all day, left the hostel to go all the way across town to some fancy Italian restaurant (a plan that ultimately failed miserably). Meanwhile, us guys headed to the local Doner Kebab hole in the wall around the corner and enjoyed a romantic curb side meal (a plan that ultimately was a huge success). Later that night we all met back up and made our way to the most famous destinations in all of Europe; The Trevi Fountain. Going at night was a great decision, as it was all lit up and not packed with tourists. 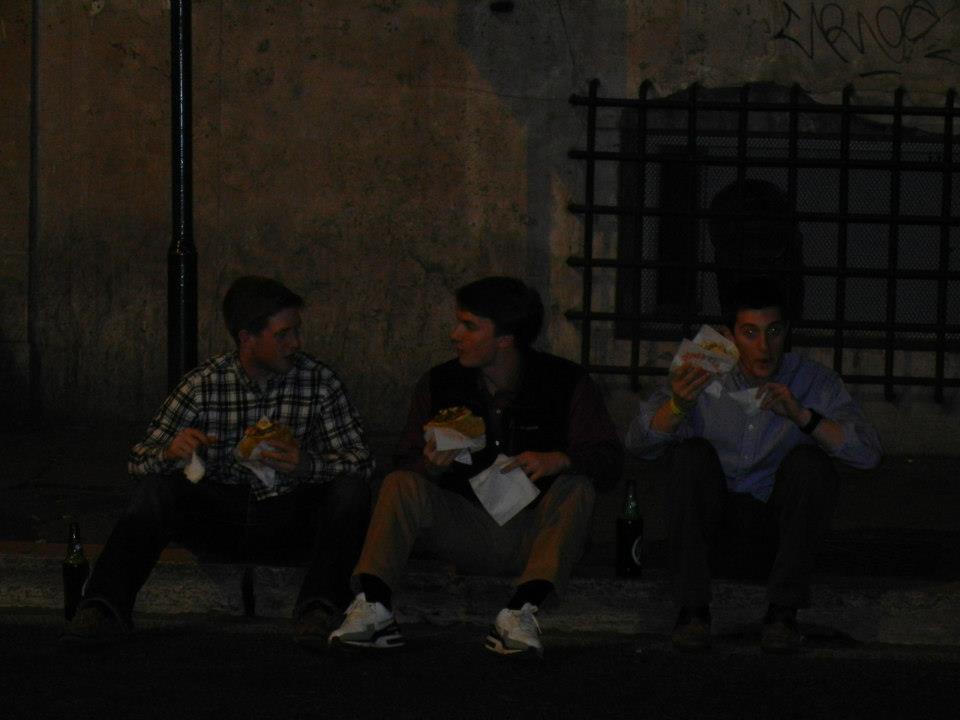 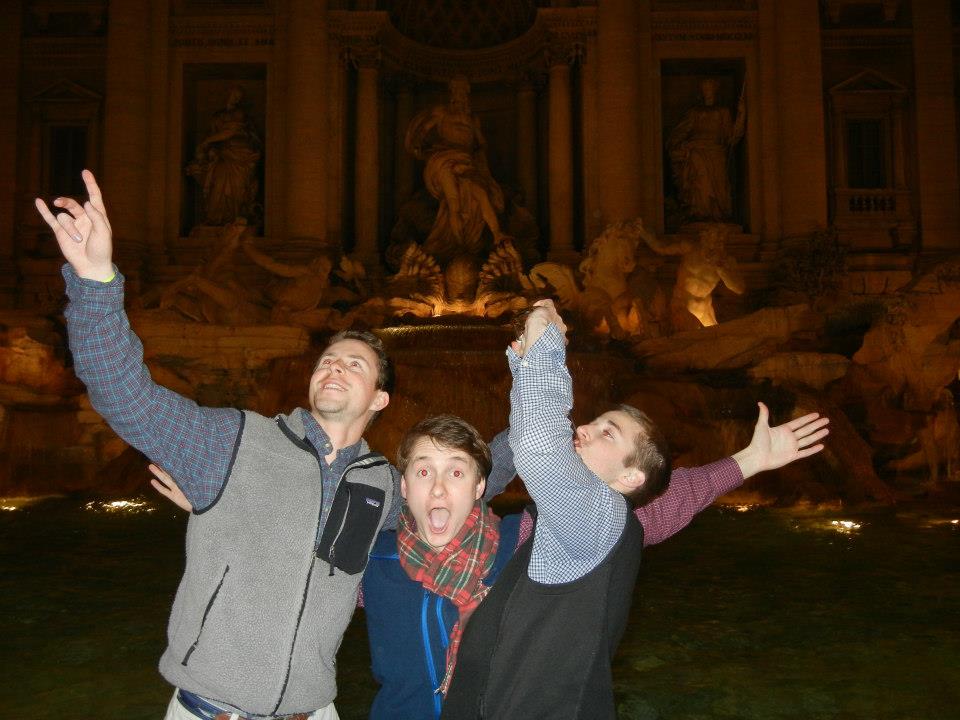 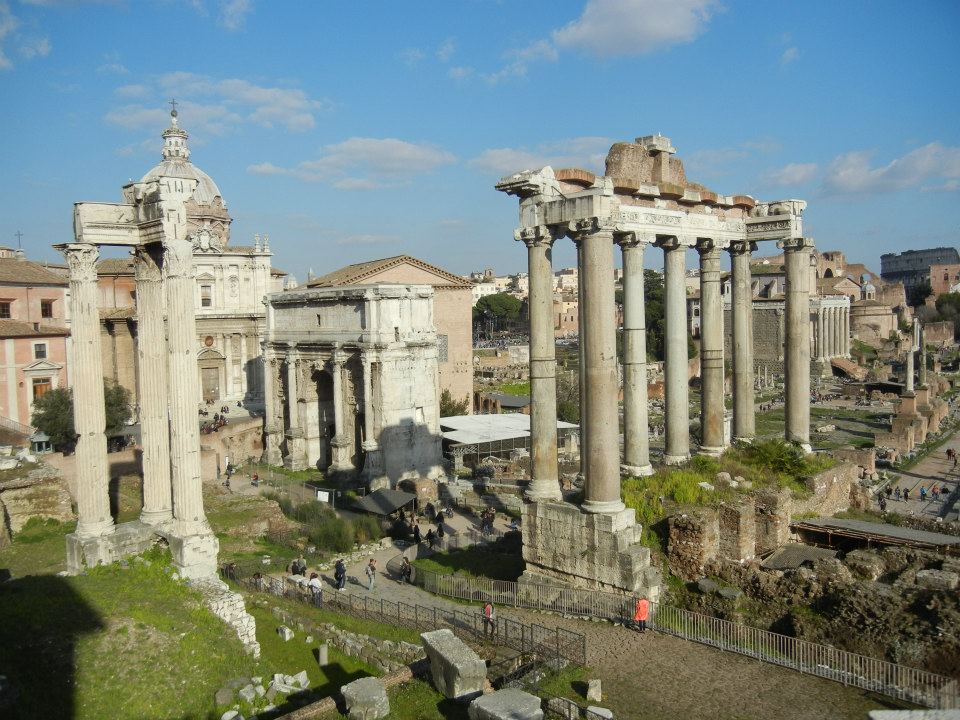 The next morning we woke again to yet another breakfast from the hostel gods. We were then off for another walking marathon and on a mission to hit all the other top sites in the city. We moved swiftly from the Pantheon, to the Piazza Navona Fountain, to the Spanish Stairs, to the Piazza Del Popolo (a square that’s home to a huge Egyptian statue which was stolen during the reign of Ramses), to the Vittoriano (a giant Capitol Hill like building also known as The Alter of the Motherland), and finally to the Imperial Forums which were a series of public spaces (now in the form of ancient ruins) built by various emperors of Rome. By the time we stopped to catch our breath it was only 4 pm and we had crossed off all 10 of the main sites on our map. The least we could do was reward ourselves. 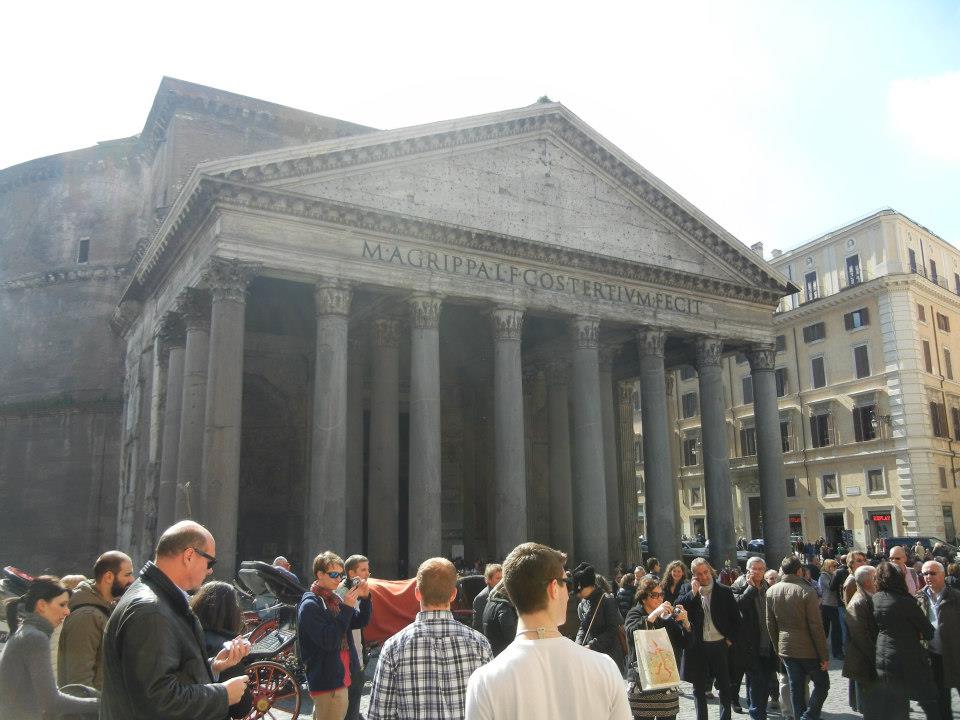 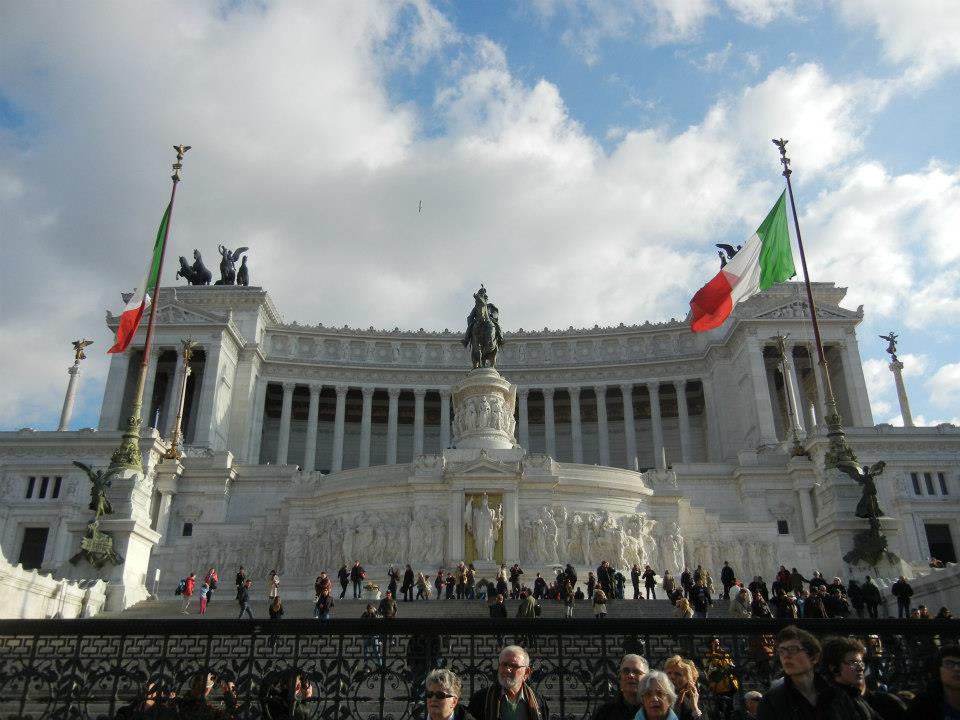 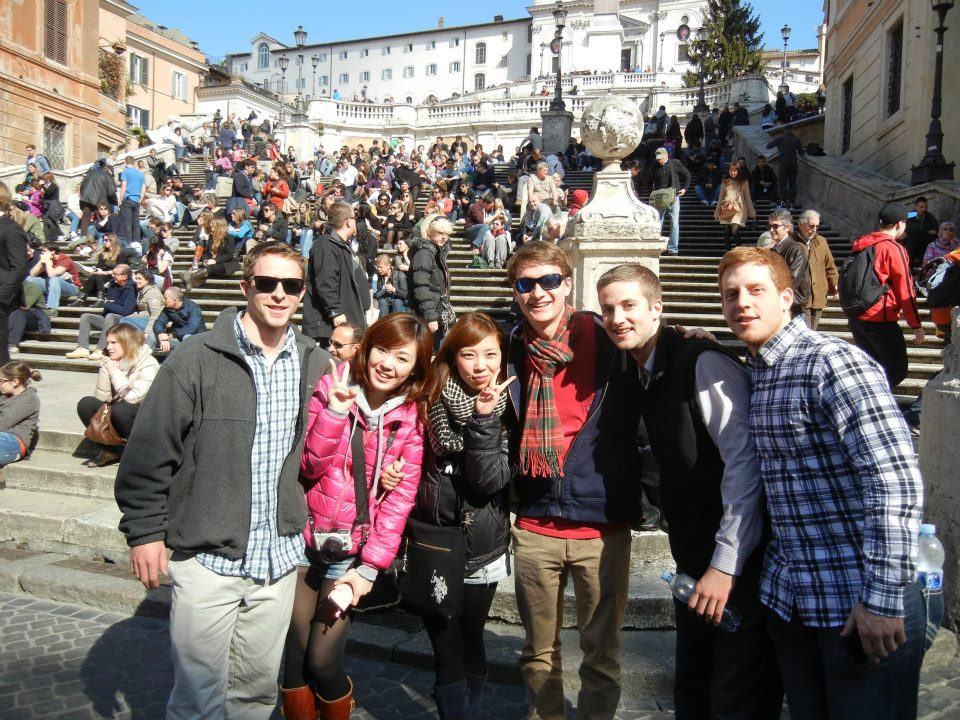 .
So reward ourselves WE DID! Using our Trip Advisor app, which had guided us from place to place like an Arc Angel all day, we arrived at one of the most famous gelaterias in Rome. The place was packed and after getting our ticket we waited in line to pick which gelato we wanted. To say I was overwhelmed when I reached the front counter is an understatement. The amount of different flavors before me was mind boggling and given that all the names were in Italian, all I could do was point at different colors like a two year old child. Luckily, the flavors I pointed at didn’t disappoint in the least bit. We sat outside in the sunny 70 degree weather and ended our day with a cone of amazing gelato. 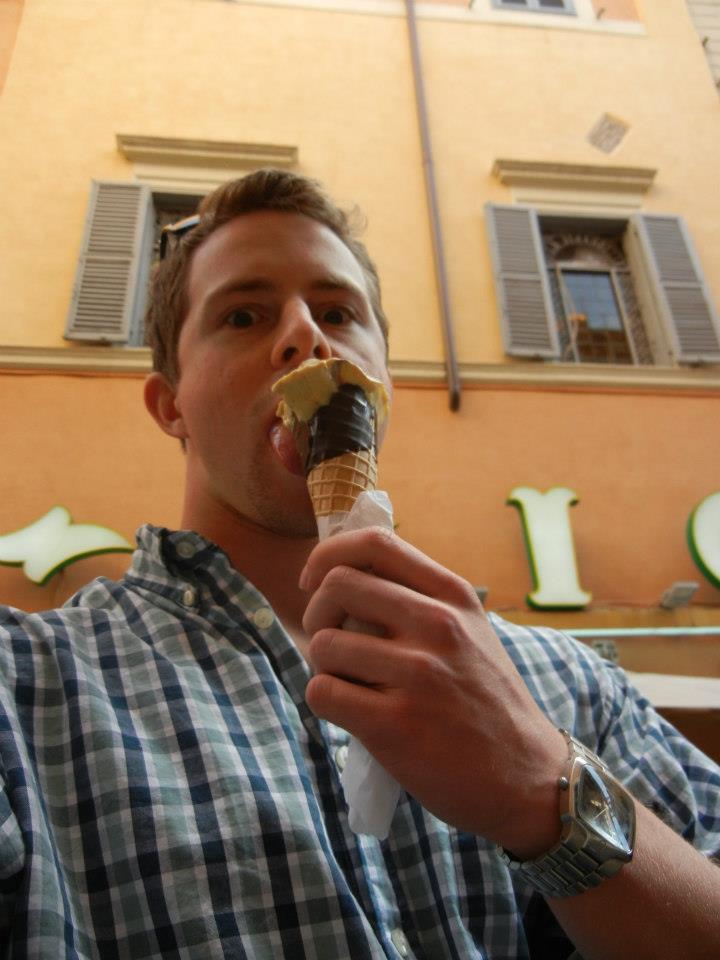 I left Rome very pleased with how the trip had turned out. We were able to see some of the most famous and historic sites in city during the short time we were there. The weather was warm and sunny, the hostel was great, and the cost of travel was relatively cheap. The weekend was easily one of my favorite travel destinations so far.