Pisa and the Leaning Tower

This past weekend many of us took a trip to Florence, Italy as well as Pisa. These are both a must do while over in Italy; the architecture is amazing in both cities and there is so much history, you could lose yourself for days. Pisa is a small city on the west coast of Italy with a population on about 90 thousand. In the ancient times, this city was the main port for Roman war expeditions and the only trade port for miles, which made it a hot spot for trade and a very wealthy city throughout the middle ages. Because Pisa was so important, it soon became the capitol of the Tuscany region.

The leaning tower was under construction for 344 years. This was due to many factors that saved the structure from toppling. Five years after construction began, the right side of the tower began to sink into the loosely packed subsoil when the second story was being added. This halted construction until they could figure out how to correct the problem. Then came the Genoa war, which kept construction from continuing for almost 100 years. When construction resumed, the new set of architects decided to add the next 5 stories, making the right side taller than the left, so the tour is not only leaning, but it has a slight curve to it as well. The top of the tower holds seven bells, one for each of the major notes, was added just 200 years after the process began and the last bell was not added until 1655 or 482 years later. The tower also went through slight foundation reconstruction and strengthening over the years to ensure it is stable and will not topple. The tower is 183 feet tall and leans at an angle of 4 degrees corrected in the early 2000’s from 5.5 degrees, which gives the tower a horizontal displacement of almost 13 feet from vertical.

This tower is world renown and one of the things to see before you die. When we were there we did not go up in the tower because the price was 18 euro and nobody wanted to fork over that much cash. We instead headed over the tourist side of the tower were you can take pictures pretending you are holding the tower up, pushing it over, hugging it etc. and there was no shortage of people in crazy positions posing with the tower. 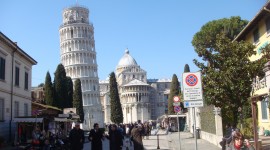 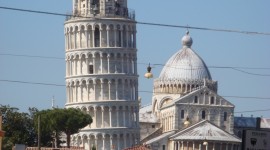 After we got all the pictures we could stand, we walked around the cathedral square to see the other two magnificent buildings in the area, the cathedral, and the domed baptistery. 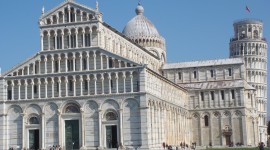 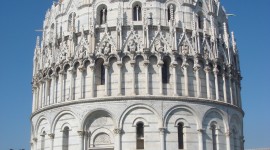 There is much more to see in Pisa besides these three buildings in the cathedral square but my group was tired from the weekend so we just settled down on the lawn and relaxed for the majority of the afternoon. It helped that the sun was out and 53 degree weather for the first time since we arrived in January. 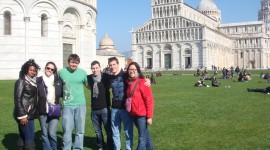