It was chilly, but beautiful!

In between castles, we walked along cliff sides!

We ate with the most incredible view of the mountain.

A look from inside one of the castle's walls! Inside was also a small weapons museum.

I got a little too exited by all the archer windows...

Looking out, to of of the castles in the old mountain kingdom.

Looking through a window in the old guard wall in San Marino. 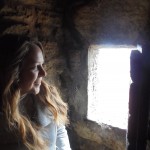 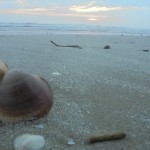 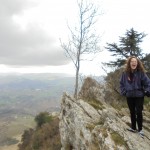 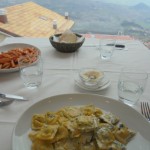 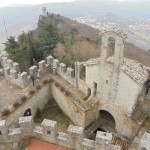 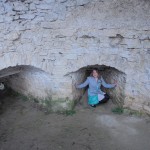 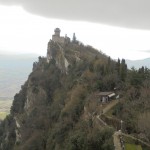 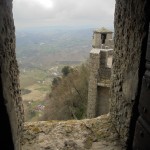 After spring break, I’m not gonna lie, I was dragging a little. Having prepared for this reaction, I had thought to stay the weekend in sleepy Paderno del Grappa. However, as Friday crept closer, I realized that my droopy eyelids in class were doing little to curb my appetite for adventure. The end of the program now in site, I simply could not just sit around in my doom room: I tried that one weekend and my anticipation had me on more trains and buses then a normal, out-of-country-weekend.

After talking with some friends, I realized I was not the only one with the internal conflict of sleep versus fun, yet also at a loss of where one could go that was both close and exciting (and not to stressful.) So we gathered up a tiny troop of 3 people, pulled up a google maps tap, searched “Italy” and started looking for the perfect relaxing weekend getaway. We had all gone north over spring break and the chill had certainly gotten to us so… south, definitely south. And water. I missed water. They missed water… it always feels like home no matter how small or large the pool. So somewhere coastal we concluded!

Next we went to price. We decided to use a bus company that we had heard some Cimba-chatter about: Flixbus. 9 Euros to get almost anywhere in Italy? Perfecto! So we began our scan of where busses leaving from Venice could take us. The answer to that is: an overwhelming number of places!

How we found Rimini, I can’t be sure. But it was on the coast, a tourist destination that would be undoubtedly tourist-less this early in the spring. It seemed perfect, a little south, a little beach, a little not-crowded. The map also showed another city nearby that had a strange outline: a park, a preserve? Nope. Less than an hour’s bus ride away was the independent Republic of San Marino. A city lost to time.

We googled that too and I became determined to see this ancient city with not one, but two standing castles sitting proudly at the top of a mountain.

As it turns out, this trip was one of the most worthwhile I have taken. The medieval kingdom has been preserved so well that you feel as though, by walking up the pathway, you might have been transported back in time. In between castles and churches, we climbed as close as we dared to dramatic and breathtaking cliffsides. We took an endless stream of photos (me with my brand new digital camera) of ourselves, of the landscapes, and of the architecture. We finished our day of exploration with a late lunch overlooking the entire landscape.

The next morning we woke up at 6 to watch the sun rise over the Rimini beach. It was cold, it was windy, and it was worth it. When we finally got on the bus to return to CIMBA we were more exhausted than when we left—so much for a relaxing weekend. But wow, was it ever worth it!

The moral of the story: don’t be afraid to pick up a map (or a computer), close your eyes, point your finger, and take off. Although this is not exactly what we did, the spirit is the same. Every city is unique and has something to offer. Don’t be afraid to take a chance; if there was ever a time to do it, it’s now.